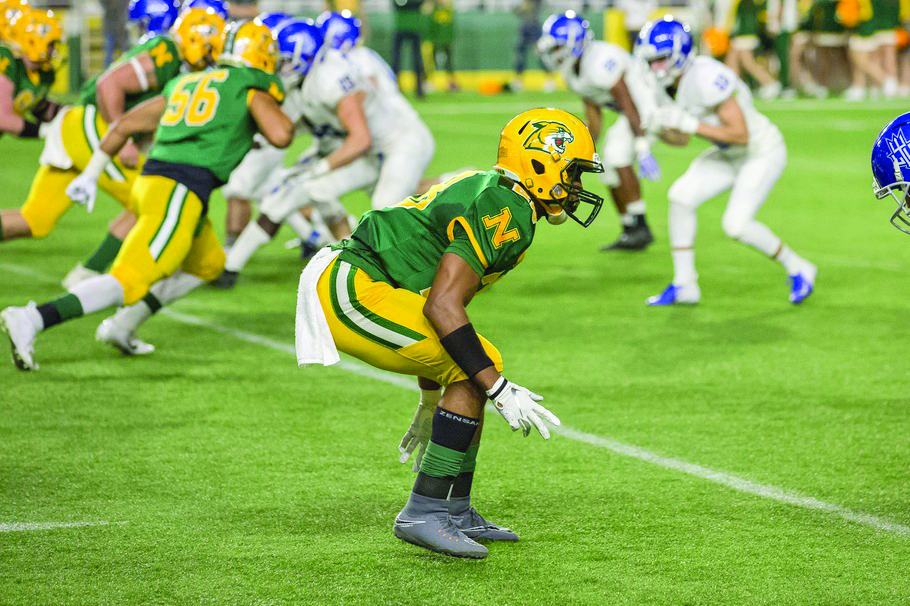 Ratavian Rinkines, a freshman on the Northern Michigan University football team in 2018, awaits a play while playing defense in the Wildcats game against Lawrence Tech on Oct. 20 in the Superior Dome. Rinkines made two solo tackles in the game. (Photo courtesy NMU)

Cornerback Ratavian Rinkines of Lansing sprung into action at the park’s Black Rocks area on Sunday, his last day to relax before Wildcats’ football practices began this week.

The last thing on his mind was the rescue of a potential drowning victim, according to a report from NMU Athletics Communications, but that’s exactly what happened.

While sitting on the beach enjoying the sun and people watching, Rinkines noticed someone had jumped in but was having trouble getting back to the shore.

“I was sitting on the beach next to Black Rocks and noticed this man jump in,” Rinkines told the NMU sports information bureau. “I saw that he was swimming, but then seemed to stop and start yelling for his wife.

“I realized he must be drowning so I started yelling up to his wife but she couldn’t hear me, so I sprinted around the beach and then climbed down to pull him out of the water.”

Upon reaching safety, the man told Rinkines that while he was swimming his muscles cramped up and he could no longer swim. The NMU sophomore didn’t realize what his actions meant until the man was on top of the rocks.

“Once he got back on top, I started thinking and thought about how his wife would feel if she would have lost him there,” Rinkines said.

When asked what made him react and jump into action, he said he wasn’t sure.

“I don’t know,” he said. “I didn’t think about it when it happened. I was just like, ‘Go.’ But it makes me feel good knowing I helped somebody else.”

Later Sunday, Rinkines saw the man and his wife again, this time while walking around the Superior Dome.

“Once I got him back on top of the rocks (at Presque Isle), we started talking and it came up that I was on the football team at NMU and we had camp starting soon,” Rinkines said. “I left to go to meetings at the (Superior) Dome. After I completed everything I was walking out and saw his wife and she said ‘Oh look, it’s our friend!’

“I looked at her and thought she looked familiar, then saw him and realized who it was.”

To others who may find themselves in a similar situation, Rinkines offered advice.

“Pay attention and notice things and just react, don’t think because you never know what you can do for somebody,” he said.

In his freshman season playing the pass defense position, Rinkines, 5-foot-8 and 163 pounds, made three tackles in five games, including two against Lawrence Tech, and was also credited with a pass breakup.

The 19-year-old is majoring in business at NMU and graduated from Sexton High School in Lansing in 2018. He was a captain on his high school football team, where he played running back and cornerback, earning his team’s Heart Award while helping the Big Reds reach the playoffs in 2016 and 2017.

He was also a three-time Lower Peninsula qualifier in track and field in high school, according to his biography on Northern’s sports website, www.nmuwildcats.com, and a conference and district wrestling champion.

Rinkines and the Wildcats have started practices and begin their season in the Superior Dome against McKendree University at 1 p.m. on Saturday, Sept. 7.