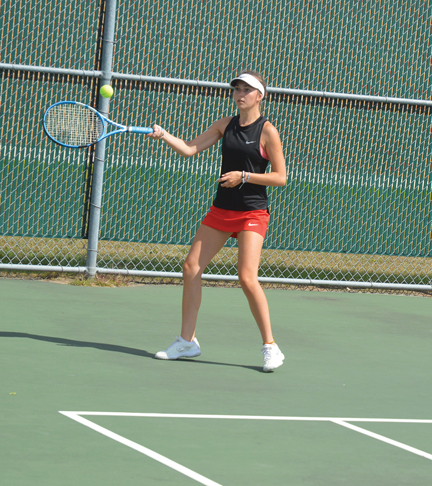 Marquette’s Kennedy Tate prepares to hit a return shot during a No. 1 doubles match against Escanaba on Wednesday in Escanaba. (Escanaba Daily Press photo by Austin Hemmingson)

“We’re hitting balls back in play, but now we have to work on being more productive.” — Derek Sandstrom, head coach, Marquette girls tennis

ESCANABA — Some nerves were on display early, but players on both sides settled down in a season-opening tennis match played here Wednesday.

Marquette swept singles action and took three out of four doubles matches to pull out a 7-1 win, though Escanaba made things tough on the Redettes.

At No. 4 singles, Esky’s Amber Young took the first set 6-4 before Marquette’s Haddie Ketzenberger fought back to win the second set 6-3 and the third set 7-5 to win a long, grueling match.

“Marquette’s singles lineup is very good and we saw that in the scores today,” Esky coach Chris Ogren said. “(We had) a great three-set performance from Amber Yang at No. 4 singles in her first-ever varsity tennis match. Her match went an hour longer than any other match on the team, and she worked hard the whole time.”

Esky picked up its lone win with a 6-4, 6-1 victory by Maddy Ide and Alison Sommers over Marquette’s Kennedy Tate and Bre Sandstrom at No. 1 doubles. After a competitive first set, the Esky tandem did a good job returning serves and finishing at the net to roll to an easier win in the second set.

“They looked good today,” Ogren said, noting the tandem played No. 2 doubles last year. “They moved well, they played the net well. It was a really good all-around performance from them.

“They finished on a high note (last year), but they were around .500 throughout the year. We were a little unsure what they’d run into at No. 1, but this was definitely a good start.”

The Redettes ground out a pair of 6-4, 6-4 wins at Nos. 2 and 3 doubles. The MSHS tandem of Sydney McCarthy and Zoey Brian executed their shot placement nicely to upend Esky’s Anna Branstrom and Laura Sliva at No. 2, while Alyson LaBelle and Ruth Hammell finished off Esky’s Maddy Mishica and Gracie Wickham after a match that lasted a little more than an hour at No. 3.

“(In) the bit I got to watch, I saw some things that we need to work on,” Redettes coach Derek Sandstrom said. “When you get nervous, you hit the easy shots, and the easy shots go right to the girl at the net. That’s the next thing we have to work on.

“We’re hitting balls back in play, but now we have to work on being more productive.”

Ogren was happy with the way the rest of his doubles teams played, despite not seeing it in the results.

“We couldn’t scratch any of them out in the second set, but we played good tennis. It’s the first match of the year.

“We’ve got some bullet points that we need to work on, but we get to come out and play again tomorrow and then Friday and three matches next week, so we have a lot of opportunities to fix some things.”

Marquette’s Juliana Golisek and Keysa Gollakner had to fight for a 7-5 win over Esky’s Rylee Kuehl and Ashley Sylvester in the first set of No. 4 doubles, but then settled into a groove for a 6-0 win in the second set.

“Looking at No. 4 doubles, it’s 7-5 and 6-0. That tells me there’s some nerves,” Coach Sandstrom said. “I think that’s just symbolic of the way the rest of the team felt, at doubles especially. Everyone’s either got a new partner or is playing way up.”

The Redettes rolled to wins in Nos. 1, 2 and 3 singles by Elysa Olivier, Mollie Kilpela and Campbell Kallio, respectively.

Coach Sandstrom noted he expects singles players to be further along early in the season.

“In the first match of the year I expect singles to be a little ahead of doubles,” he said. “We have a lot of girls coming back that played in a bunch of matches last season and lots of tournaments.

“Singles should be ahead of doubles for a little bit, but hopefully we get doubles going.”

Both teams were scheduled to return to action this morning. Marquette hosts Gladstone at 11 a.m.