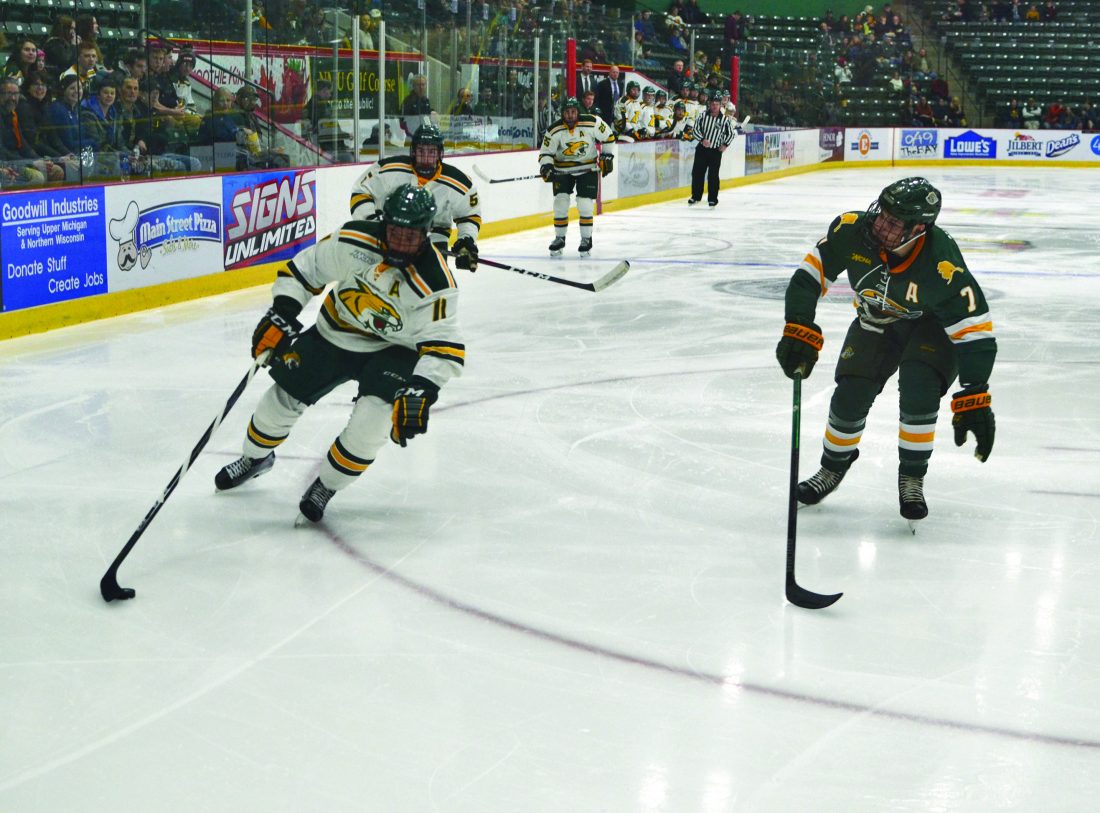 MARQUETTE — Last Friday, a surprise announcement was made that sent shockwaves across the college hockey world.

One week later, the powers at be in that world are still trying to figure things out.

Seven of the 10 current WCHA men’s hockey schools announced that they would be leaving the conference in two years and are looking at forming a new conference. One of those schools is Northern Michigan University with the other six schools being Michigan Tech, Lake Superior State, Ferris State, Bowling Green State, Minnesota State and Bemidji State. All seven institutions have submitted formal Letters of Notice to the WCHA to initiate the withdrawal process and abide by the conference’s Articles of Incorporation and Bylaws.

The announcement definitely took WCHA commissioner Bill Robertson by surprise and he said that the schools involved didn’t provide a specific reason why they decided to leave the conference.

“We were made aware of that situation late in the day on Friday, so it did come as a shock,” Robertson said in a phone interview Wednesday.

Robertson also said that by giving the WCHA 25 months’ notice, none of the seven schools are subject to any exiting fees.

All of the seven schools involved in the move have referred all media inquiries over to athletics consultant Dr. Morris Kurtz, who previously served as athletic director at St. Cloud State and special operations assistant at Penn State. In a phone interview earlier this week, Kurtz said that he got involved with the process in the earlier part of June and said that it was “a collaborative effort right from the beginning” between the seven schools.

“There was discussions that took place about providing some guidance and leadership and I was convinced after talking with members of the institutions that they were fully committed to an exciting endeavor that would enhance the academic and athletic experience of their student-athletes.” Kurtz said.

When asked what he thought was the main reason the seven schools wanted to pursue the creation of a new conference, Kurtz said it had to do with student-athlete experience.

“They were unanimous in their feeling that moving in this direction would allow them to enhance the academic and athletic experience of their student athletes,” he said.

With the seven schools deciding to depart, that leaves Alaska-Anchorage, Alaska-Fairbanks and Alabama-Huntsville left hanging by themselves in the WCHA. However, Robertson said that all three schools are devoted to staying in the conference.

“We’re evaluating where we’re at and to see what steps we can take to continue the WCHA for long-term success,” Robertson said. “The three schools, Alaska-Anchorage, Alaska-Fairbanks and Alabama-Huntsville are committed to making the WCHA as good as it can be and we will evaluate how we could potentially add some additional teams.”

All three of those teams are having problems right now though. In the case of the two Alaska schools, they’ve had to battle financial problems the past few years as the state deals with its fiscal issues. As the Mankato Free Press pointed out earlier this week, Anchorage announced in May that it would be leaving the 8,700 capacity, city-owned Sullivan Arena for an on-campus facility that only seats 750, even thought the conference requires that teams play in facilities with a capacity of 2,500 or more. The Free Press added that Fairbanks has also discussed potentially doing the same thing.

Both schools were dealt a second gut punch last Friday when Alaska Governor Mike Dunleavy line-item vetoed $130 million from the University of Alaska system’s budget. A National Public Radio article said that budget cut comes after another $5 million cut that was previously agreed on by legislators.

Robertson said that the conference has been talking to both the Seawolves and the Nanooks, but it didn’t want to comment further on the financial issues in the state.

“We’ve been in consistent contact with both Anchorage and Fairbanks on this front and we’ll see how this develops and moves forward,” he said. “I don’t have any additional comment on that other than that we’re monitoring the situation.”

Huntsville is another situation that the conference is monitoring. UAH has battled its own issues in the past, most of them coming from its location. The Chargers are the only Division I college hockey program located in the southeastern U.S., which keeps it from being geographically popular to other conferences. After the College Hockey America men’s conference dissolved after the 2009-10 season, Huntsville was the only one of the four remaining programs that couldn’t find a new home. The Chargers struggled to survive on their own and at one point, the school announced that the program would lose its Division I status after the 2011-12 season. However, the school reversed course just a couple of months later, and eventually, the Chargers were admitted into the WCHA for the 2013-14 season.

“I think their (Huntsville’s) program, if you look at their record over the past few seasons, they’ve continued to accumulate more victories each year,” Robertson said. “(Head coach) Mike Corbett has done an amazing job of putting that hockey program on the map and putting it in contention. They have beaten our best teams in the WCHA, so they can compete with any team in the country on any given hockey night. I do believe that their long-range plan is to get an on-campus sports complex that includes hockey. If they’re able to secure that and get that done down the road without knowing the exact timetable, I think they’ll be a school or institution that will do even better and become a team that competes for an NCAA Tournament berth down the road.”

When asked if he felt if Huntsville had a chance to become the eighth team to even out the new seven-team conference, Kurtz said that should be more of a national discussion.

For the time being, Kurtz said that the seven schools are just in the beginning stages and that there are a lot of things that need to be done.

“Everything we’re doing is procedural in nature, and lots of boxes to check, and that process was initiated on Friday and will play out over the next two years,” he said.

As far as the WCHA goes, Robertson said that when it comes to expansion, the conference would like to get to an even number of teams, but for right now, it’s focusing on the upcoming season and coming up with a plan for the future.

“Ideally, you would like to have six or more (teams),” he said. “There’s nothing that says that this cannot be done, but we’re certainly in the exploratory stages on all those fronts.

“I think that the main focus for us is that we’re working toward the start of the 2019-20 season with our 10-member institutions, and at the same time, looking at the strategic plan for the league going forward in the coming years. That will all play out over time and I’m excited to get the season going, but we have lots of work to be done on all fronts and we will continue to move in a positive direction.”