After being cut by Steelers, former NMU receiver Tucker embraces time in CFL with Hamilton 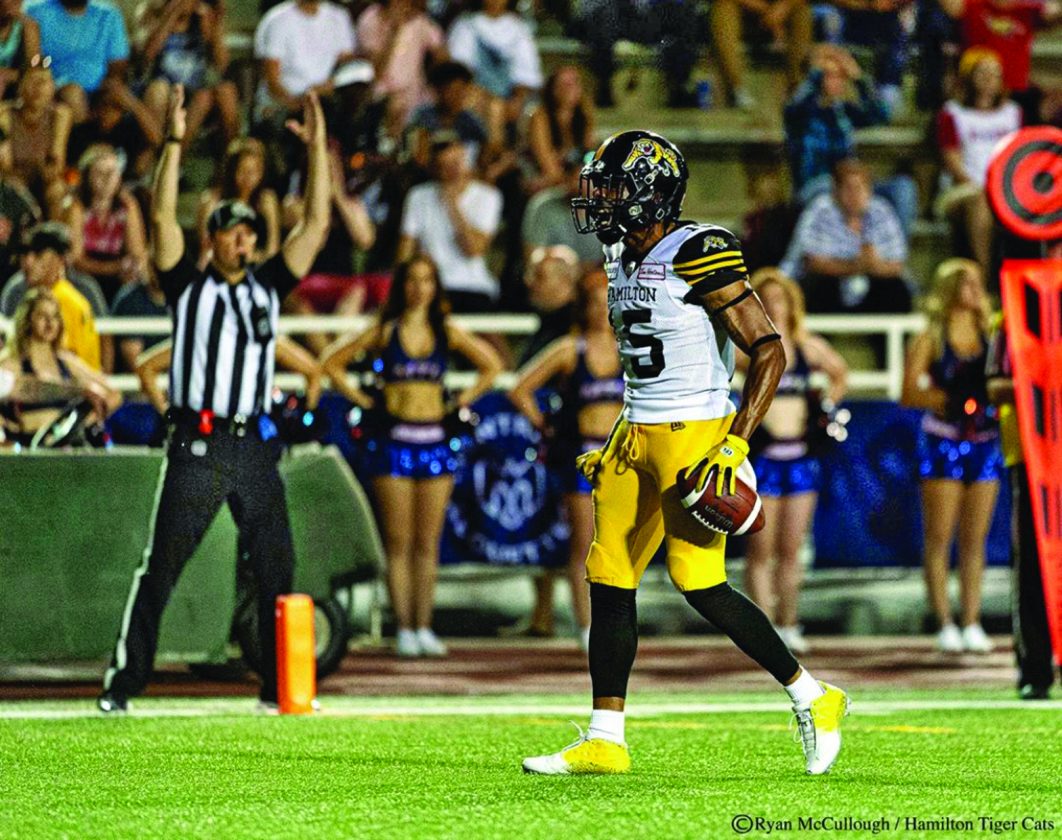 After spending two seasons on the Pittsburgh Steelers’ practice squad, the former Northern Michigan University wide receiver/kickoff returner was waived by the team. During his time in Pittsburgh, he played in some preseason games, but was never able to crack the 53-man roster and compete in a regular season game.

Tucker tried out with other NFL teams like the Houston Texans, the Cleveland Browns and the Tampa Bay Buccaneers, but he couldn’t catch on with any of them. Now Tucker was stuck and it appeared that maybe his football career was coming to an end. But then this spring, he got a new opportunity, and interestingly enough, it was with another team whose colors are black and gold.

Back in May, Tucker signed with the Canadian Football League’s (CFL) Hamilton (Ont.) Tiger-Cats. This was a huge move for him as he’d never been outside of the United States before, but here he was heading to Canada and to a new start to his career.

“When I got cut from Pittsburgh, I was kind of expecting the worst,” Tucker said in a phone interview Thursday.

“Only because I know what happens when guys get injured (he’d suffered an ankle injury), which is part of the game, it gives other guys an opportunity to step up. I thought I had done enough to stick around, but obviously, I didn’t. So when I was cut, I was just a little shocked, but then again, at the same time, that’s how the business goes.

“Hamilton reached out to me probably right after I got cut from Pittsburgh. They were like ‘Hey, have you ever thought about the CFL? Where do you think your career is going?’ That kind of started our talks. As I moved forward in the coming months, they stayed in contact through every workout that I was doing. Through every city that I was going to to perform in front of these NFL teams, they kind of stayed in contact. Things didn’t kind of pan out there (his NFL tryouts), but the CFL and Hamilton stayed in contact with me without coming there and I ultimately made the decision to go.”

Not surprisingly, it was an adjustment for Tucker when he got up to Hamilton. However, it didn’t take him long to understand how the CFL is steeped in tradition and how the fans are just as rabid as NFL fans.

Tucker’s biggest adjustment was learning the different rules in the CFL. For the most part, the game is similar to NFL and college football. However, the field is longer and wider than in the NFL and the end zones are deeper. There are also 12 players per team on the field at one time instead of 11 and a team gets three downs to get a first down instead of four. There are other rule differences, but those are a few of the basic ones.

Even though he’s been up in Hamilton for a while, Tucker says he’s still trying to figure out all the rule changes.

“The rules are a little funky and I still don’t know all the details of the rules and we’re five games into the season,” he said with a laugh. “I have no idea in some circumstances and some situations what’s going on. But I just know how to make plays and do things when the ball’s in my hands, or if the ball goes into the air. That’s what I focus on. I know that I’m not doing anything wrong when I’m out there, so that’s all I can focus on.”

What didn’t change for Tucker is what it was like to line up for his first snap in the CFL. After playing football for years, everything just felt normal for him, even though he was in a different league.

Tucker also had that same mindset when he caught his first CFL touchdown pass earlier this month against Montreal. He also caught the 2-point conversion right after that to cut down Hamilton’s deficit against the Alouettes. Tucker said he was primarily focused on helping the team come back at the time, but the moment sunk in after the game ended.

“When I caught that touchdown, we were down in the game,” he said. “So I couldn’t really think about some sentimental moment or anything like that. I was really just trying to make a play to help our team come back. I felt like as long as there was time on the clock, I was going to give everything that I had in order for us to come out victorious. It was kind of after the game more so when I had that moment where I was like ‘Wow. That’s my first professional touchdown of my career.’ So it was a pretty full circle moment for me with all the work that I’ve put in and all the time I’ve committed to this game.”

Now that he’s been with the Tiger-Cats for a couple months and has seen some significant action, Tucker is feeling comfortable in his new surroundings and said that he “feels a great peace” in Canada.

“Overall, I would say my experience so far in my CFL career has been exciting,” he said. “It’s been full of challenges and there’s been some ups and downs already. But right now, we’re a 4-1 football team and we’re competing at a pretty high level right now. I’m just excited to keep the ball rolling. I can’t wait to see what’s we have in store. We have a lot of work to do and a lot to get better on, but guys are excited about what’s to come.”

Even though he’s making a name for himself in the pros, Tucker remains humble and is very appreciative of the support he’s gotten from the Upper Peninsula and NMU fans.

“It means the world to me to have the support of the people in the U.P. and the people of the Marquette community,” Tucker said. “They’ve seen me kind of grow at Northern from a basketball transfer to a guy who became an All-GLIAC at Northern and ultimately got to represent Northern Michigan in the National Football League, and now, the CFL. It’s an honor for me to be one of those guys and I don’t take it lightly. I’m very thankful and I just hope in some way I’m able to continue to inspire and give kids hope around this area.”

Speaking of hope, when asked if Tucker still hopes of getting back to the NFL, he said he’s just taking what life gives him and he’s just enjoying what he has in front of him.

“I’m really just enjoying the ride right now,” he said. “I’m enjoying my team. I don’t know what’s to come. I can’t tell time or predict the future. Obviously, I want to do what’s best for my career. If a bigger opportunity comes, or if it doesn’t come, I’ll cross that bridge when I get there. But as for now, I’m just enjoying what I have right here in Hamilton.”