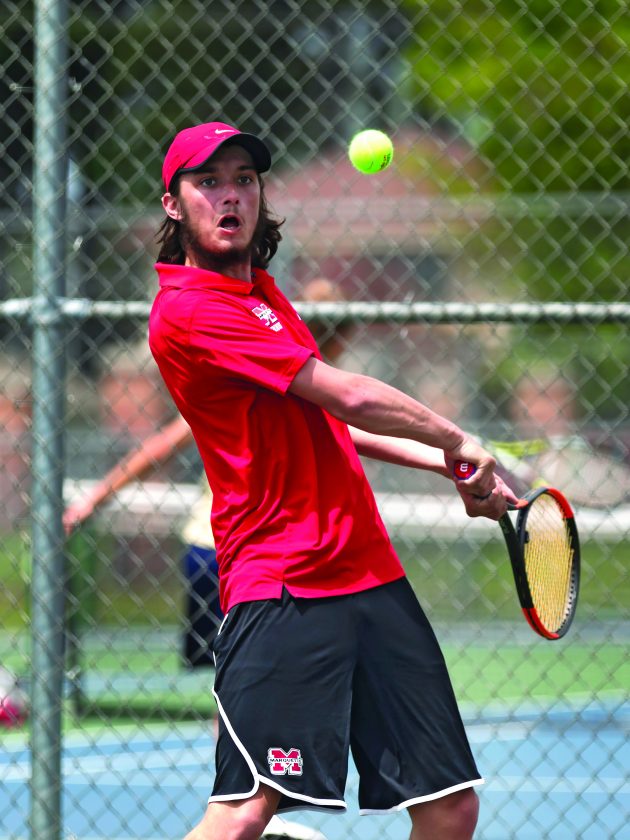 KINGSFORD — To absolutely nobody’s surprise, Alexander “Alec” Olivier of Marquette has been named the Upper Peninsula Division 1 boys tennis Player of the Year.

Also no surprise was that Negaunee was named the Team of the Year.

Olivier completed a perfect — as in never a loss — four-year high school career with a straight-sets victories over Chas Kumpula 6-1, 6-1 in the championship match of the U.P. Finals tournament held in Kingsford last week.

The Redmen senior started out immediately as a freshman at No. 1 singles, remaining there for his four years. Despite always facing the best the opposition had to offer, he never lost in 63 matches going back to 2016.

“Playing at No. 1 you’re always facing the best players,” Marquette head coach Charlie Drury said at the U.P. Finals. “To be able to do it for four years is just a remarkable feat. I don’t think anyone has done that, at least not in the last 50 years that I’m aware.

“Alec’s been solid. He’s had a lot of pressure to keep that record going. He’s done just a tremendous job and (we) couldn’t be more proud of him.”

Olivier and Kumpula, the No. 1 singles player for Negaunee, were named all-state in Division 1, as were the Miners’ doubles tandem of Jakson Sager and Drew Lindberg and Kingsford’s doubles pair of Tyler Beauchamp and Reece Fortner.

Like Olivier and Kumpula, those doubles duos met in the U.P. Finals championship match at No. 1, with the Negaunee pair prevailing 6-2, 7-5.

Marquette and Negaunee had other singles and doubles players named to the All-U.P. Division 1 First Team and honorable mention lists, too.

That also shouldn’t be a surprise as those teams finished 1-2 at the U.P. Finals, Negaunee winning its fourth straight U.P. title.

“We understand that most seasons we come in there’s a pretty sizable target on our back,” Miners coach Kyle Saari said at the U.P. Finals.

“These kids, they kind of embrace that challenge and understand the tradition they’ve built to pass the game on to the next group that comes in.

“Back from the first day of practice this is always one of the goals that we set. They work hard day in and day out and support each other. They definitely do it as a team sport. That’s always the unique side of it is they embrace each others’ success and that’s what’s most neat to be a part of.”

In singles, Olivier and MSHS teammate Nicholaus “Nick” Olivier made the First Team. For Negaunee, the same honor was bestowed upon Kumpula and Will Luke, with Miners teammate Peyton Anderson earning honorable mention.

From Marquette, the duo of Trevor Lewis and Connor Johnson also was named First Team.

Here are the other Division 1 honorees: