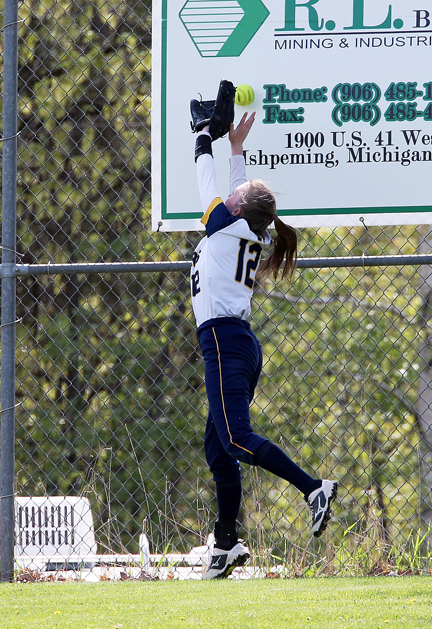 NATIONAL MINE — There’s a first time for everything. In the case of the Negaunee varsity softball team, that time was last year when it won its first district championship in program history.

Fast-forward one season later, and the Miners have prevailed in the district tournament again, this time shutting out Calumet 8-0 in Saturday’s MHSAA Division 3 District 65 title game at the Tilden Township Ball Field.

Negaunee (27-6) was backed by a two-game, 21-strikeout performance from pitcher Skylar Hall.

At the plate, Hannah Voskuhl led the charge on offense with two home runs on the day, which featured two semifinal contests ahead of the championship game.

The Miners topped Westwood 5-1 in the first semifinal before Calumet earned a 17-9 decision over Houghton in semifinal No. 2.

Negaunee head coach Randy Carlson said there was an added weight on his team’s shoulders to win the district tournament this season with Negaunee hosting the Region 17 tourney at LaCombe Field next weekend.

“Back to back,” he said. “I’ll tell you what, it feels great because it’s one of those things with us hosting regionals this year, you really wanted to get there.

“I think we’ve had that expectation all year, but it’s something that we knew was going to be tough. We didn’t want to be hosting regionals next week and not be there.”

Carlson also credited his ace in the pitcher’s circle, backed by a strong performance from the Miners’ defense.

Hall allowed just three hits while walking one and striking out nine in the championship game, complementing her semifinal performance where she tossed 12 strikeouts, allowed six hits and walked one.

“I think we played good,” Hall said. “We were all happy because we stayed ahead the whole time.”

Hall, likely the go-to pitcher in the regional round as well, added that it’s all about keeping up her practice routines.

“I just need to keep practicing, hitting my spots and working on spins and stuff,” she said.

The Miners jumped out to a 2-0 lead after one and doubled that total in the second. The most notable play came in the top of the third.

With Negaunee up to bat as the designated visitors, Voskuhl ripped a shot to left-center field that was attempted to be caught by Calumet outfielders Morgan Erkkila and Andrea Karaniemi. The players collided full-body and went down, allowing the ball to drop and Voskuhl to get an inside-the-park home run.

Despite the scary situation that left Erkkila and Karaniemi shaken, both were OK and remained in the game.

The Voskuhl homer put the Miners up 5-0, and the middle innings were fairly uneventful until the sixth, when a line drive from Morgan Carlson brought home Allie Ennett and Larissa Anderson to add two more runs.

Negaunee added its final run in the top of the seventh.

The Miners had seven hits off Calumet pitcher Elli Djerf, who went six innings striking out three and walking three. Molly Helminen finished the game for the Copper Kings in the seventh, allowing one run on two hits, striking out one and walking one.

“It was a good year for us,” he said. “We’re a relatively young team. Our No. 1 pitcher (Djerf) is only a sophomore. Our second pitcher is a junior and we’ve got some younger pitchers coming up as well as some other younger players who are freshmen and sophomores.

“We’ve got a lot to look forward to in the coming couple of years. We knew coming into this game, it was going to be a tough one, especially having to play the (semifinal) before and battling the way we had to battle. Negaunee is a great team and it’s well-deserving that they got the win. We played them tough, just a little too much.”

Negaunee faces Kingsley in the Region 17 semifinals at LaCombe Field at noon Saturday, while Gladstone will face Boyne City in the other half of the bracket at 10 a.m. The championship game is slated for 2 p.m., with the winner advancing to the state quarterfinals.

Perhaps the best game of the tripleheader was the first one. Slated for a 10 a.m. start under sunny skies in National Mine, the crowd came out for the battle of the Marquette County softball powerhouses.

Westwood, the tourney host, sat with a 19-4 record going into contest. With Hall on the rubber for the Miners, the Patriots rolled with their ace, Karlie Patron.

Hall fanned the first six Patriots hitters while Patron was forced to work out of a few jams as Negaunee stranded five runners over the first three innings.

Westwood, the designated visitors, struck first in the top of the fourth inning on an infield single from Patron, which scored Ellie Miller from second on the throw to first.

Down 1-0 with the bases loaded, Abby Nelson wasn’t going to leave her teammates stranded again.

The Negaunee senior hit a drive to right field scoring Hall, Sierra Hendrickson and Karki to make it 3-1.

Voskuhl hit a leadoff home run in the bottom of the fifth, this one over the left field fence, to make it 4-1. Negaunee added one more run in the inning on a sacrifice bunt.

Voskuhl talked about hitting the homer and the team’s frustrations with leaving runners stranded.

The Patriots put two runners on in the seventh, but Hall finished things off with two strikeouts to send the Miners to the championship.

For Westwood head coach Jared Koski, it wasn’t the way his team wanted to end a great season.

“It was a good effort by our girls,” he said. “They came out ready to play, they battled hard, they did everything we asked them to do. There’s nothing we can hang our heads about. Negaunee is a good team and we pushed them a little bit.

“We pushed them to have to generate some runs and they were able to do that.”

Koski also wanted to thank his seniors, Katie Wiljanen and Raija Stille, for putting up a fight in their final game in a Patriots’ jersey.

“We had two seniors who played in our lineup,” he said. “We had six hits and they had three of those. You’ve got to give a fighting senior all the credit in the world. Raija and Katie came out not wanting to go down (today). They played their hearts out for us and that’s all we could ask for.”

Stille went 1 for 3 while Wiljanen went 2 for 3. Patron, Miller and Madi Koski all added a hit for Westwood.

It was a close game between the Copper Kings and Gremlins for a little while, but Calumet came out on top for its first-ever district win.

Calumet jumped ahead 3-0 in the top of the first before the teams were knotted 4-4 after three.

The Copper Kings added four more runs in the top of the fourth before the Gremlins fired back with three in the bottom half, keeping Calumet at bay in a one-run game at 8-7.

Calumet all but put things away with seven more runs in the top of the seventh. Houghton added two runs in the bottom half, but were unable to finish the rally.

The Copper Kings finished with 16 hits to Houghton’s six. Djerf struck out nine Gremlins hitters while walking 10. Josie Connors had the rubber for Houghton, striking out five and walking four.