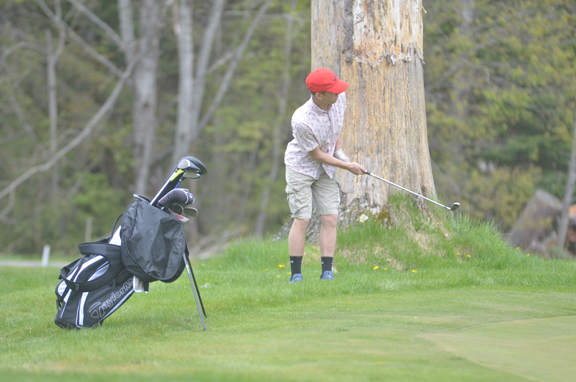 CHAMPION — While champions were crowned last week at the Upper Peninsula Finals in MHSAA high school golf, there was still one last grudge match to be settled on Monday afternoon between three western Marquette County schools.

The annual WIN — Westwood, Ishpeming and Negaunee — meet that was postponed from May 20 was contested at Wawonowin Country Club under cloudy skies, with players just beating the rain to complete their nine-hole rounds.

Negaunee claimed the girls team title by default, shooting 222, while the Miners boys edged the Patriots 191 to 200. Ishpeming competed as a co-op program with Negaunee for the second straight season this spring.

“It was great to wrap up the season with a win,” Annala said. “I’ll be looking forward to next year.”

Negaunee head coach Dustin Hongisto said the meet was a relaxing way for players from all three schools to finish off the school year, as well as the high school golf season after what would be considered a stressful week during the U.P. Finals.

“This is the first time in my coaching tenure that we’ve had the WIN meet after U.P. Finals,” he said. “It’s a grudge match between the two schools that we don’t want to skip. It was nice to get it in before the end of the school year.”

Hongisto also has several seniors on his roster who will be missed next season, and thanked them for their contributions.

“On both sides we’re going to be taking a hit,” he said. “With the seniors on the girls side from Ishpeming with Rylee and Brylea (Ranta), to Angelina (Porres) from Negaunee. All three of them are graduating and they were all in the top five (today).

“On the boys side next year, we’ll be missing Keegan (Erva), Luke (Stenfors) and Nolan (Corwin). According to our scoring averages, those are our top three guys on that side.

“It’ll be interesting to see who takes their spots. Hopefully we’ve got some seventh- or eighth-grade kids coming up in the future who will be nice additions to the team.”

Westwood head coach Marc Nutini was also pleased with his team this season and was satisfied to end the season on a more relaxed note.

“Overall we had a young team who all cut their scores down by the end of the year and improved,” he said. “Usually we end the year with U.P.’s, but it was nice to end with the WIN meet this year. It’s a relaxing meet and the kids all get along.”

Nutini also thanked his seniors for everything they’ve done.

“We have two girls and one boy who will be missed,” he said. “Colin Bjorne played for all four years. Haley Mattila and Aubrie Magnuson both played for three years. They were all in the top of our lineup.”

Ishpeming junior Marissa Neveau finished runner-up behind her Hematites teammate with 55, while Ranta joined them on the podium in third with 56. Porres shot 57 for fourth place while Westwood freshman Laci Moffatt rounded out the medal positions in fifth with 58.

For the boys, Annala was followed by Stenfors with 46. Annala’s teammate, junior Dylan Junak, was third with 47 followed by Corwin in fourth also with 47.