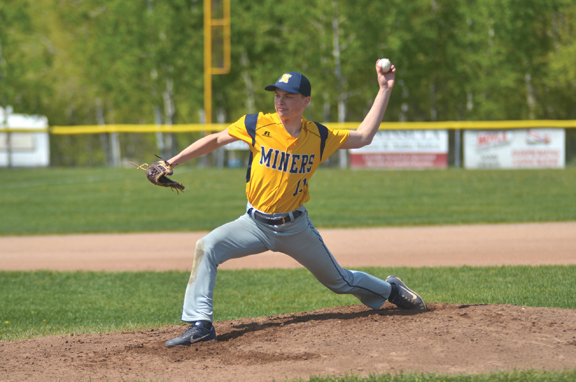 NEGAUNEE — Negaunee needed extra innings against a surprisingly tough semifinal opponent, then breezed through the championship game to capture the MHSAA Division 3 district baseball championship at home on Saturday.

Playing at its Iron Town Field, the Miners needed nine innings to fend off Superior Central 4-3 in the day’s first game, then had a lot fewer problems holding off Calumet 7-0 in the championship game.

Against the Cougars, Adam Ogea scored in the bottom of the ninth with one out to end the extra-inning affair.

That made a winner out of Miners reliever Alex Zampese, who pitched the top of the ninth and recorded a strikeout without allowing a hit or walk.

He came in relief of starter Tanner Peterson, who went eight innings and allowed three runs on just four hits and a walk while fanning 10.

The hard-luck loser was SC’s Zach Englund, who went the final two winnings and gave up two runs on two hits and three walks as he struck out three.

Logan Fish led Negaunee batters, going 3 for 4 with a double and two runs scored. Teammate Carter Richardson was 2 for 4 with two RBIs.

For the Cougars, Kyle Frusti was 2 for 4 with an RBI, while Eli Werner and Parker Maki each had a hit.

In the victory over Calumet, Alex Munson scattered eight hits in a seven-inning, complete-game shutout as he walked just one and struck out six.

Richardson, Munson and Gerald Johnson each had two hits.