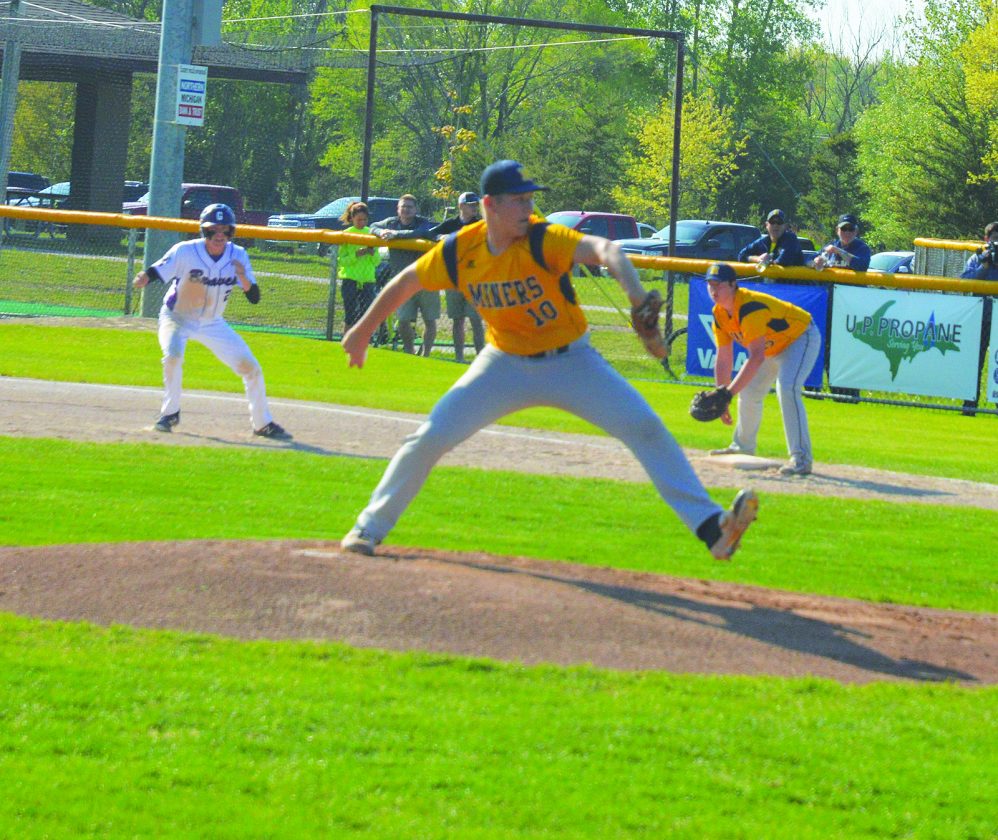 GLADSTONE — If there’s one thing coach Kelly Shea has preached to his Gladstone baseball team, its that it needs to get off to faster starts.

The Braves picked a good time to do that, jumping out to a 4-0 lead and riding it to a 6-0 shutout win over Negaunee in a Division 3 regional semifinal here Wednesday.

Cooper Cavadeas got the party started with a triple to rightcenter field to lead off the top of the second inning. Jared Crow then drove him in with a line drive single to left on a 2-2 pitch. Three batters later, Cole Hansen and Carson Shea delivered back-to-back RBI singles, and another run scored on a dropped line drive by MIners’ left fielder Gerald Johnson off the bat of Zach Hanson to make it 4-0.

“It takes the pressure off when you get some early runs like that,” coach Shea said. “Carson just did his thing with the lead. He’s a good pitcher, but he’s an even better pitcher with the lead .. so yeah, getting out early was huge for us.”

“You go by what their catcher is like, and I thought we could run on him,” coach Shea said. “You’re putting pressure on the whole team, really. That’s a big part of our game. We have speed, and we’re going to utilize it. We love to steal bases.”

Gladstone added two more in the fourth on RBI singles by Hansen and Hanson to make it 6-0.

Carson Shea was lights out on the mound, surrendering just four hits and one walk through 6 1/3 innings before being pulled in the seventh to be preserved for Saturday’s regional final.

“I just tried to locate out there,” he said. “I don’t have a lot of speed, but the key for me is to locate, locate, locate. With a defense behind me like this, it makes my job easier. They’re second to none, and they made a lot of great plays out there. I just can’t thank them enough.”

The Miners (19-8) put runners on first and second to lead off the bottom of the fifth, but Cavadeas picked off Negaunee’s Jadan Grobar at second base from his catcher position to stymie their momentum.

After Shea was pulled with an out in the seventh, Drake Forrest struck out Johnson before walking the next three batters to load the bases with two outs. Hanson was called upon to finish it out, and he got Jason Waterman to go down looking on a 3-2 pitch to end the game.

Hansen had two hits and two RBIs to lead the Braves, while Crow added a hit and two RBIs.

Tanner Peterson took the loss for Negaunee, allowing six runs (five earned) on eights hits while fanning three and walking two through 6 1/3 innings. Alex Zampese got the last two outs in the seventh in relief.

It was a rematch of a pair of doubleheaders in the regular season, in which Negaunee swept Gladstone on its home field in April, and Gladstone returned the favor with a sweep at Negaunee in late May.

“In my opinion, this is probably the best Negaunee team they’ve had in a while,” Shea said. “They really surprised us when they beat us here, and then when we beat them down there it obviously gave us a lot of confidence … but It was a little scary coming in here because it was 2-2, and anything could happen. I got to give them credit — they weren’t afraid of us. We mercied them both times down there, and they came back here with a lot of confidence. I have a lot of respect for that.”

Miners’ coach Jason Siik was complimentary of the Braves, and felt his team played them even in all but two innings.

“They’re such a good team from top to bottom,” he said. “Their baserunning was perfect, and it kind of rattled us a little bit. We were able to make that adjustment and kind of stop that baserunning, but in these kind of games, you have to be sharp the whole time. I thought we played pretty good baseball, minus two innings.”

Like any other coach, Siik was disappointed to see the season end.

“I wish it wasn’t over. The weather finally gets nice and now our season ends,” he said. “I’m extremely proud of this team — we’ve come a long way. I don’t think any of these kids expected this much growth this year, being this young. Between the coaches and the schools and all of the community support, I couldn’t be more proud to have this team represent Negaunee.”