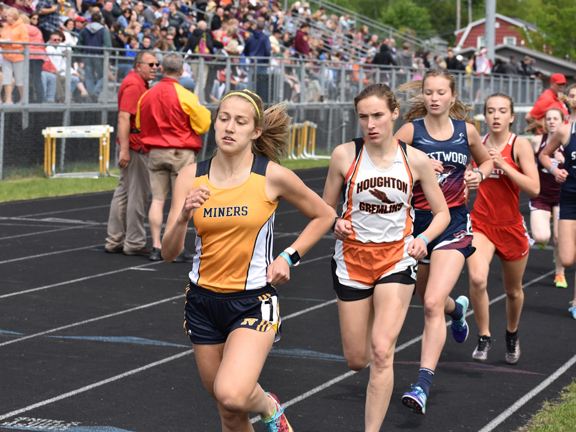 “I knew all that hard work she put in earlier in the year would pay off.” — Vickie Paupore, Negaunee girls track coach, on her daughter and Miners junior Emily Paupore

KINGSFORD — Typically it may be hard to find a strong one-two punch on a girls track and field team, but Emily Paupore and Chloe Norman easily fill that role at Negaunee.

The pair led the Miners throughout this season and kept Negaunee in the mix for the MHSAA Upper Peninsula Division 1 team title Saturday. Even though the Miners came up just short of repeating as U.P. champs, each girl had an impressive day.

Paupore, one of the best long-distance runners in the peninsula, put on a show at the finals, cruising to a repeat win in the 3,200-meter run and made a great charge to hold off challengers to win both the 800 and 1,600 for the second straight year as well. She set a U.P. finals record in the 3,200 last year, and came just short of breaking it again. 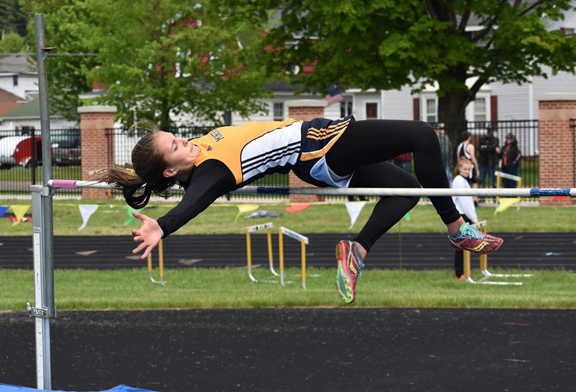 The most impressive part of Paupore’s performance was that she did it after coming off some recent issues with her legs.

“I was having shin issues so two weeks ago, I took a week off,” she said during the finals. “I just biked and swam and just tried to stay in shape. Last week, I started running again and incorporated it back in.

“I actually think it really helped. I think it was a good taper and having fresh legs today is really nice. I’ve never gone into the U.P. Finals with fresh legs, so that’s really nice.”

Paupore’s mother Vickie, who is also Negaunee’s girls head coach, was confident that her daughter would come through thanks to the large amount of work she’d put in during the season.

“She was nervous about her endurance and how she’d be able to do, but she did just fine,” Coach Paupore said. “She’s worked super hard, so I knew all that hard work she put in earlier in the year would pay off because she had some great races.”

While Paupore’s strength is endurance, Norman’s is all about getting air, specifically in the jumping events as she took first in both the high jump and long jump and repeated as the 300 hurdles champ.

When asked about her love of the jumping events, Norman said her siblings played a role in that.

“I have two older brothers and I grew up in a family with all boys,” she said. “All cousins and boys and I’ve always been in athletics and I just like jumping.”

Vickie Paupore said that Norman’s day was impressive and that she even surpassed expectations in one of her events.

“Chloe’s 300 hurdle race was phenomenal,” Coach Paupore said. “She was so far ahead right from the beginning and she was only 16 hundredths of a second off the U.P. record. I know that’s going to be on her mind next year when she comes back.

“She had an outstanding performance and she did very well again in the high jump and long jump, as always. She also had a good performance in the 100 hurdles. She was supposed to be fourth and she got second, so that was great.

“She’s just that natural athlete that you always hope for as a coach, but she also has got such a positive attitude, which makes her so special. She’s a good kid as well as a good athlete.”

When it comes to next year’s goals, the two juniors had different approaches. Norman’s is basic, saying she wants to get the records that were just out of her reach this year.

“I definitely want to get the 100 hurdles record and I tied the (Negaunee) high jump record, so I really want to beat that,” she said. “I got it in the first meet when I tied it, but I haven’t been able to get that quite yet. So I’m definitely aiming for that and just improving on all my other events.”

Paupore’s goals, on the other hand, were a bit more specific. As an NCAA Division I college recruit, she’s setting a high bar for herself in 2020.

“I really want to break 11 minutes in the two-mile (3,200 meters),” Emily Paupore said. “It’s been a goal of mine for a really long time and this year coming off a stress reaction, it wasn’t exactly feasible for me.

“I think next year, I really want to break 11 in the two-mile and then hopefully, this is a very lofty goal, but I want to break five minutes in the mile, too.

“I have big expectations for myself,” she added with a laugh. “It’s the best way to set yourself up, though, for success. Just looking into the future.”

“The thing that sets Emily apart is her determination and her drive,” Coach Paupore said. “She’s a talented athlete as well, but she just puts in so much work that a lot of people probably don’t realize. The amount of work she puts in is pretty amazing. I never have to ask her to do a workout for sure. She’s more than willing to.”