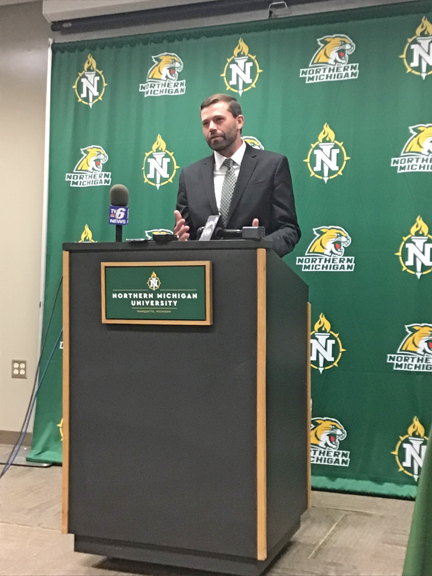 zak was named the 15th head coach in the long history of Northern Michigan University men’s basketball on Wednesday morning.

That’s when he was introduced at an introductory press conference in the Izzo-Mariucci Room on NMU’s campus with his first chance to make an impression on fans, players, area residents and the media.

Majkrzak comes to Marquette after spending a season as men’s head coach at Bryant & Stratton College, a junior college in the Milwaukee suburb of Wauwatosa, Wisconsin. A school that competes at the Division II level in the National Junior College Athletic Association, the Bobcats went 25-8 and had a No. 17 national ranking until Majkrzak’s mentorship last year.

Before taking the Bryant & Stratton position, Majkrzak was the top assistant at NCAA Division II Bemidji State from 2014-18.

The new bench boss has been in Marquette for only two days, but it already feels like home compared to his former coaching gig in Wisconsin’s biggest metropolis. 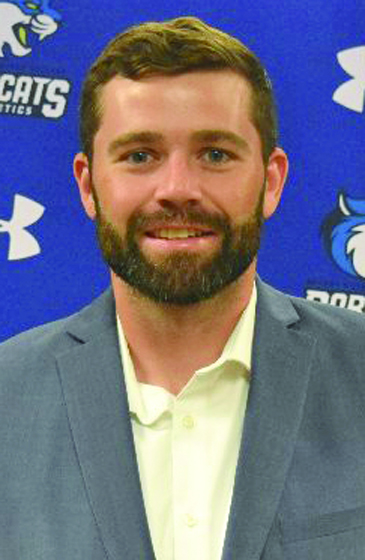 Likely some of the most important people to Majkrzak will be his players. The Wildcats are expected to return a dozen of them from last season’s roster, and the new coach had a chance to speak with them this week.

“Our program is going to be a players-first program,” Majkrzak said. “It’s not going to be about me. As excited as I was going into it, knowing that the team is coming off of a great season, the part that really stood out when I sat down and met with them, we didn’t talk that much about the basketball part.

“They mentioned community service, little kids out on the floor slapping high-fives before games and changing a culture. When most of these student-athletes came to Northern Michigan, it had a long history of success, and was in a very short history of decline. These guys changed it, and put us right back to contending for championships.”

The basketball part will definitely be important moving forward, however. Majkrzak preached speed, purpose and what it means to be a Wildcat.

“Everyone asks about style of play,” he said. “We’re going to try to play fast, but everybody says that in their opening press conference. I think there’s a Twitter clip where there’s like 67 head coaches saying ‘We’re going to start playing fast.’

“What we’re really going to try to do is play with purpose, which I think is a little bit different. We’re going to push the ball, everything we do is going to be aggressive. My team last year finished second in the nation in 3-pointers made and third in the nation in free throw percentage. We also led our region in turnovers per game. Those are going to be a big emphasis. Defensively, we’re going to attack you the same way we want to on offense.

“One of the things I want to bring to Northern Michigan is that they already have a great culture in place in the locker room. I want to define kind of what it means to be a Wildcat.”

NMU Director of Athletics Forrest Karr introduced Majkrzak. Karr stated that 70 candidates applied for the job, with 15 selected for video interviews before six finalists were welcomed for on-campus interviews over the last two weeks.

“Nobody on the search committee knew Matt before the process started, but almost every search committee member had him ranked first when we met last Friday morning to discuss (the candidates),” Karr said.

“Matt also made a great impression on the returning student-athletes and other groups and individuals during each stage of the search.”

“I’d also like to thank Coach Sall,” Majkrzak said. “I haven’t had a chance to reach out to him yet, but he did a tremendous job re-establishing the program to where it needs to be.”