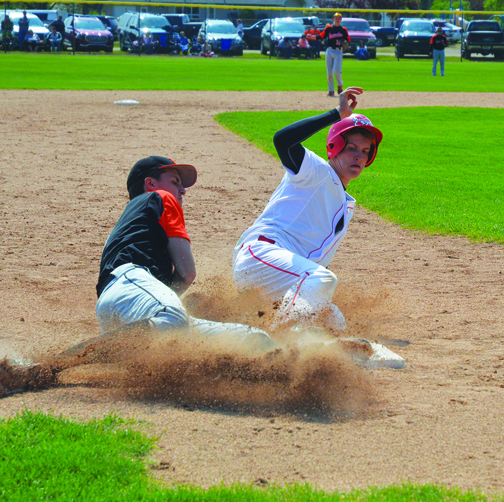 ESCANABA — Marquette fell to Escanaba 5-4 in its opening game of the MHSAA Division 2 baseball district tournament played in Escanaba on Saturday afternoon.

The Eskymos had reached the tourney semifinal after defeating Cheboygan 8-2 on Tuesday. Later Saturday, Petoskey won the district title with a 4-0 victory over Escanaba.

Marquette opened with two runs in the first inning, holding that lead until the fourth when Esky tied the game. The home team added three more in the sixth to take a 5-2 lead before a Redmen comeback fell just short in the top of the seventh.

MSHS scored twice in the final rally, leaving the tying run on third base when the game ended, according to Marquette assistant coach Randy Larson.

Jake Allard-Soucey started the seventh with a hit to left field before Peter VandenAvond reached on an infield hit. Jake Peterson grounded out to second, moving the runners to second and third before Blake Henriksen roped a double to left to send both runners home and make it a one-run game.

Henriksen then stole third before Jon Jason and Justin Wenk were retired to end the Redmen’s season.

“This game really kind of sums up our season,” MSHS first-year manager Spencer Larson said. “It seemed like we had runners in scoring position all the time but just couldn’t find a way to get them in. The boys played real hard and certainly were in this game right up until the end.

“We played real well in a lot of games but just made some errors or mental mistakes late in games that cost us. We have to do better at that next season. We competed in just about every game; as we develop we will start winning those close games.”

VandenAvond, Peterson, Henriksen, Jason and Allard-Soucey each had a hit, while All-Great Northern Conference pitcher Brendan Kaski went the distance on the mound, scattering seven hits and walking two.

“Escanaba managed five runs, but none of them were earned,” Larson said. “That says a great deal about Brendan and the type of performance he gave us today. I couldn’t have asked for anything more.”