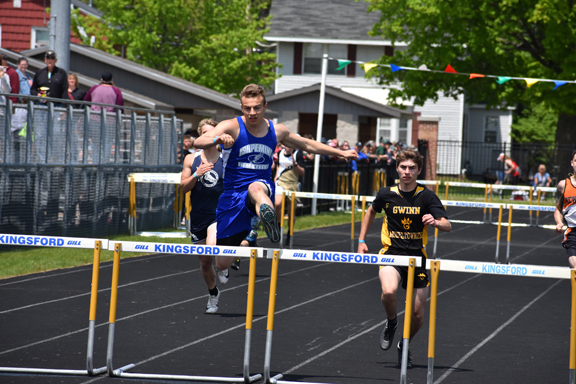 KINGSFORD — The Ishpeming boys track and field team may not have been the favorite at the Upper Peninsula Division 2 Finals on Saturday.

But by the end of the afternoon, the Hematites proved that meets are won on the track and not on paper as they repeated as U.P. champions.

Ishpeming finished with 128 points, while Newberry took second with 84 despite only winning one event, the 1,600-meter relay.

“We came in here on paper as the underdogs,” Hematites head coach P.J. Pruett said. “I’m missing two great sprinters. Some of the fastest kids in the U.P. are both hurt and they’re going to Michigan Tech on football scholarships (Hunter Smith and Matt Trawick). They’re great athletes, but everybody pulled together and did what we had to do.

“This one is my best win because we lost 25 percent of our team and we came back and won. So this is a really special one.”

The Hematites’ strength came in the running events as they won the 3,200 relay and Jonah Broberg took home titles in the 800 and 1,600. Gavin Sundberg also gave Ishpeming a win in the 400, while Coulton Prillwitz notched wins in the 300 hurdles and long jump.

Gwinn had an individual champion as David Duvall won the 110 hurdles and he came close to getting a second, but was edged out by Prillwitz in the 300 hurdles.

Manistique also found success as Alex Misniakiewicz won the 3,200 and Schyler Andersen picked up a victory in the discus.

Norway in the 400 and Ironwood in the 800 split the other two relays with the Knights also getting two individual wins from Mitchell LeGrave in the 100 and 200. Other individual champions were Hancock’s Austin Salani in the pole vault and St. Ignace’s Joe Kelly in the shot put.

In the girls meet, St. Ignace took control early and ran away from the competition, finishing with 130 points, well ahead of the runner-up Hematites. Elizabeth Becker was the star for the Saints, taking first in the 800, 1,600 and 3,200. Ally Schultz in the 200 and 400, Brooke Brandstrom in the high jump and Heather Lamb in the long jump also notched Saints’ wins.

St. Ignace may have rolled to the team title, but Marquette County teams still had some impressive days. Gwinn finished first in the 400 relay and both Emily Curtice in the 100 and Marissa Delmont in the shot put notched wins for the Modeltowners.

Manistique had a solid day, winning the 1,600 and 3,200 relays and got an individual victory from Ashley McDonald in the pole vault.

Bark River-Harris won the other relay, the 800, and Hailee Demers gave the Broncos a victory in the 300 hurdles. West Iron County took home a title as Jordan Shamion won the 100 hurdles.