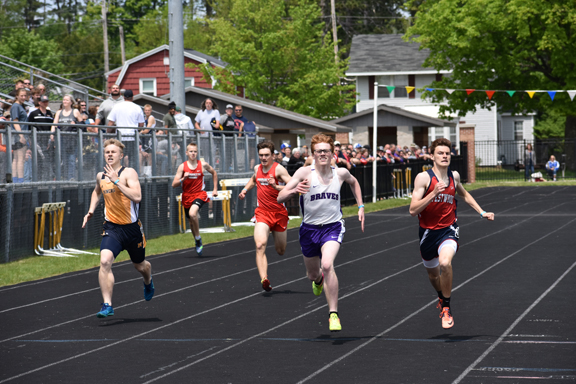 KINGSFORD — It’s been said that all good things must come to an end and that’s what happened to the Marquette boys’ winning streak at the Division 1 Upper Peninsula track and field finals.

The Redmen had a four-year run as champions before the streak came to end Saturday as Gladstone finished on top with 127 points. Marquette finished tied with Westwood for second with 97 points.

The streak may have come to an end, but Redmen head coach Kyle Detmers was in good spirits and proud of his team’s effort.

“It was a really good year with the coaching staff and the kids I had,” Detmers said. “We just ran into a really good Gladstone team and Westwood team.

“It’s what you want. You want good competition. There’s nothing in me that feels like ‘Wow, we just fell short.’ I just don’t feel that way. I just feel like we did our best and the kids always give me a perfect effort.

“We had a really good day. It’s just that Gladstone had a better day and Westwood was right there, too.”

It was quite a battle for second place as it looked like the Redmen had it locked up as the meet wound down, but the Patriots eked out a tie and head coach Scott Syrjala was ecstatic.

“You try to get your kids to do all they can and that’s what we did and we were rewarded.”

The two teams each earned wins in the relay events with Marquette getting a victory in the 3,200-meter and Westwood taking both the 400 and 800.

The squads continued to go blow for blow in the individual running events and in the field. Nathan Beckman in the 200 and Chad Pohlman in the 400 gave the Patriots wins on the track and Blake Hewitt brought home a win in the shot put.

Meanwhile, Mathurin Gagnon finished on top in the 800 and Raffy Millado notched two wins in the field — the high jump and long jump — for the Redmen.

The winning Braves found their success all over the course as Calvin Thibault earned victories in the 110 and 300 hurdles and Adam Bruce won two distance events, the 1,600 and 3,200. Not only that, but Gladstone got a win in the field as Blake Servant notched a victory in the discus.