Final showcase on the court 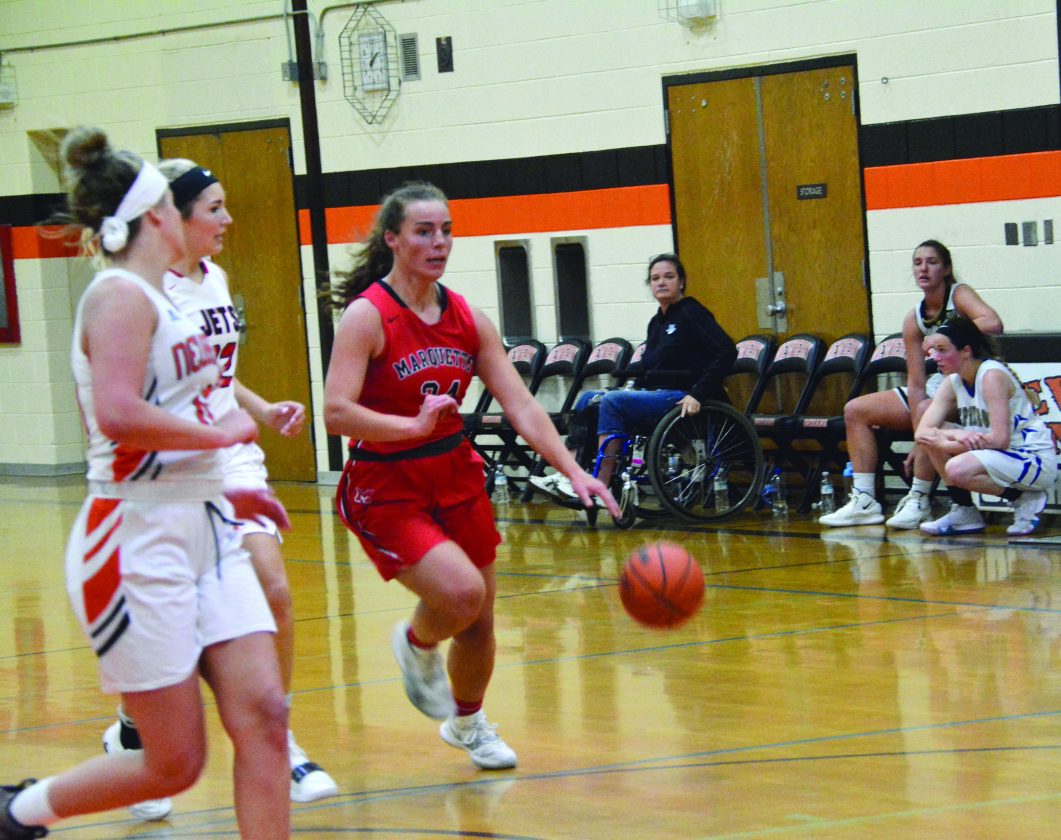 NEWBERRY — It was a final basketball showcase for the Upper Peninsula’s best recently-graduated seniors Saturday.

The North prevailed twice, winning both the girls and boys’ games at the 34th annual All-Star Classic, held for the first time at Newberry High School.

A shooting display which featured 12 3-pointers powered the North girls to a 72-48 win over the South stars. Marquette’s Sydney Kivi produced a double-double 23 points and 11 rebounds to claim Most Valuable Player honors.

“It’s a new experience, and a little weird teaming up with girls who were your main competitors and rivals during the high school season,” said Kivi, who plans to attend Northern Michigan University this fall. “It was fun, and we seemed to mesh well as a team.

“For me, everything felt really good today. I made a few threes early, and just tried to stay aggressive. I’ve been shooting around at the PEIF, and lifting with (current NMU guard and former Redette) Amber Huebner. I think that really helped.”

Kivi had four triples in the first half and scored 17 points as the North took a 31-28 lead at intermission.The North broke open a close game in the third quarter, outscoring the South 19-4.

“We came into practice yesterday, and I told the girls we’re just going to shoot, shoot and shoot some more,” said Westwood coach Kurt Corcoran, who directed the North team. “They caught fire and our shooting won the game today. Sydney hit four threes in the first half, and then Madison heated up in the third quarter. The shooting became contagious, and we kind of busted open the game.

“We had some uncanny chemistry with this group of players, who didn’t really know each other all that well. It was good fun, laughs and a real good time. I’ve coached against a lot of these girls quite a few times before, like Kivi, Pruett, and (Negaunee’s) Kenzie Karki. It’s nice when they’re on my team for once, and not causing headaches for me.”

“I told the girls just wear your uniforms one more time for the school on the front, and cherish every second,” said South coach Dorene Ingalls of St. Ignace. “Every single one of them played hard, and they were good representatives of their schools and the U.P. I love this event. It gives the kids one more chance to get together, and meet some new people. They get to know each other a little better.”

Coveyou won the girls’ 3-point shooting contest before the game. She is still recovering from recent surgery to correct exertional compartment syndrome.

“For me, coaching Emily one more time meant a lot,” Ingalls said. “It was sure fun to watch her play over the years. Today, I had to keep her stints short and she’s still not at full strength. She still had some big points and rebounds. She’s a warrior and only plays one way, and that’s all-out.”

Calumet’s Matt Ojala was the star of the boys game, leading the North to a 107-93 win over the South.

The boys game was a classic shootout, with the teams trading baskets throughout. The North led 52-52 at halftime, opened a lead in the third quarter, and held off the South down the stretch.

“Of the 10 guys we had, they all brought something to the table,” North coach Chad Hewitt said. “Matt really came to play today. He did a great job of representing Mid-Pen (and) West PAC basketball.

“It’s a great day to showcase U.P. basketball talent. I’ve coached many of these guys before in travel basketball, and coached against a lot of them as well. When you bring them all together, it’s a great weekend, and I would recommend it to any coach who is asked to do it.”

The North had plenty of firepower besides Ojala. Houghton’s George Butvilas tossed in 26 points, while Westwood’s Nathan Beckman scored 12 points and Marquette’s Bryce Brazeau added nine to lead the team.

Castor, an NMU recruit, was one of several players who also competed in the Border Bash all-star game last week in Ironwood.

“It was kind of bittersweet as a last ‘high school’ event for me,” Castor said. “It was fun to be here, but we lost the game. It was a good game, but towards the end, our team seemed more tired. They got into the paint, and then dished it out to their shooters. We weren’t able to get help out on their shooters quick enough.

“I’ve been working out a lot on my own, putting time in the weight room trying to get ready to go to Northern,” Castor said. “I know I need to get a lot quicker with my feet on defense to compete with the athletes in Division II in the GLIAC.”