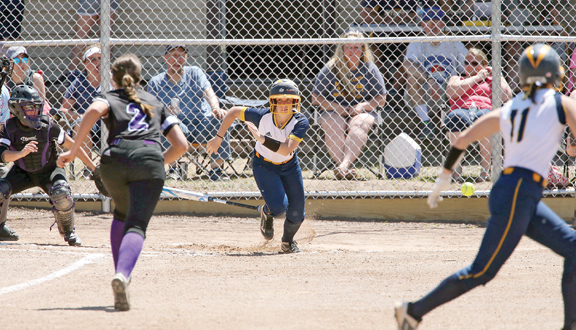 Negaunee’s Kenzie Karki, center, sprints for first base after laying down a bunt in the second inning of the championship game at the MHSAA Division 3 regional softball tournament held at Negaunee on Saturday. (Photo courtesy Daryl T. Jarvinen)

“This is a unique team. There’s really not a lot of defined roles because we have such good depth.” — Randy Carlson, head coach, Negaunee softball

NEGAUNEE — Who needs to wait for the third time to be the charm, when the second time will do just nicely for the Negaunee High School softball team this week.

The Miners play in the quarterfinals of the MHSAA Division 3 tournament for the second straight year after dispatching downstate Kingsley and Upper Peninsula rival Gladstone in the regionals on Saturday.

Negaunee (29-6) faces Standish-Sterling (30-12) in Gaylord at 5 p.m. Tuesday. A win there would advance the Miners to the state semifinals to be played at Michigan State University in East Lansing at 5:30 p.m. Friday against the winner of a quarterfinal between Marine City and Millington. 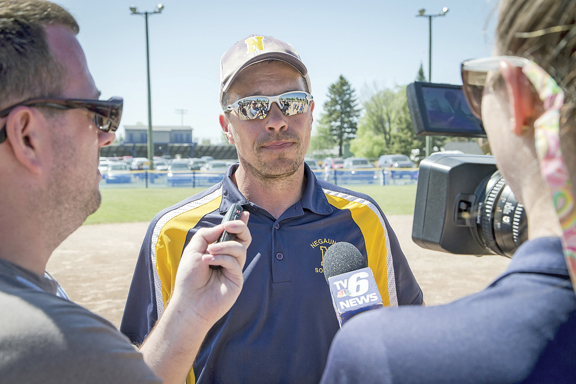 Saturday’s state championship game will also be played at 5:30 p.m. at MSU with the opponent to come from four teams in the other half of the bracket — Grandville Calvin Christian, Schoolcraft, Dundee or Riverview Gabriel Richard.

Negaunee head coach Randy Carlson said Sunday evening that he didn’t yet know much about Standish-Sterling.

“I’ve got some contacts downstate that I’m going to be getting with, but I see they defeated Sanford-Meridian in their district, the team we played in the quarterfinals last year,” he said. “And I also noticed they’ve played a lot of low-scoring games, so I’m thinking they probably have some pretty good pitching.”

Kind of like the Miners do with their stalwart duo of senior Abby Nelson and junior Skylar Hall.

“They’re interchangeable, since I have a lot of faith in both of them,” Carlson said. “There’s a definite style difference between them, their whole mentalities are different.

“Skylar is more of a thrower, she just likes to throw the ball and not analyze everything.

“Abby is very calculating — she really likes to think things through. Her success is partly based on being very knowledge

Negaunee’s Kenzie Karki, center, sprints for first base after laying down a bunt in the second inning of the championship game at the MHSAA Division 3 regional softball tournament held at Negaunee on Saturday. (Photo courtesy Daryl T. Jarvinen)

able. She’s just such a competitor.”

But that doesn’t mean Hall is just lucky to have found success.

“Skylar is probably the most unique individual I’ve ever coached,” Carlson said. “I don’t ever see her get rattled. She doesn’t treat a big game any differently than any other game. I guess you could call it an inner calm.

“The last two years, she’s pitched in the regional final against Gladstone and given up a total of one run in those two years.

“She’s never nervous — at least she doesn’t show it. A lot of players get so amped up when they’re in these important games, and it really affects their performance. Not Sky.”

The Negaunee team is far from being a two-girl show, though. Actually about as far away from that as is possible.

“This is a unique team,” Carlson said. “There’s really not a lot of defined roles because we have such good depth. One girl could be batting anywhere from (No.) 2 to (Nos.) 7 or 8 in the order.”

His one concern has been the ebb and flow of the offense.

“It’s been that way,” he said. “Some games we’ve started fast and other games we’ll go a few innings where it’s pretty quiet with the bats.

“But we have the capability of scoring quickly because we have that depth in our lineup.”

The depth includes the defense, too.

“Everyone is capable of hitting well, and there’s no real holes in our defense, either. Some teams you worry if a runner gets on if a fielder is going to be able to make a play. Not with this group.

“We’ve played pretty good ball all year defensively. In the regionals, we made like one error, and there were a lot of balls put in play that day.”

He did say that senior Hannah Voskuhl is his most valuable hitter after she earned an all-state honorable mention a year ago from the Michigan High School Softball Coaches Association.

“She’s been our best hitter this season and been one of our best players over the past three years,” Carlson said. “But again, we’re solid 1 through 9 in our batting order and on defense, too.”

He attributes at least part of the quality depth to several factors.

“A lot (of our players) have played some travel ball,” the coach said. “I think these are the first group of kids that played travel ball all the way through (to high school).

“And there’s a lot of three-sport athletes on this team, a lot of them with basketball, tennis and volleyball.”

Negaunee’s run through the MHSAA tourney started with a 5-1 win over Westwood and 8-0 shutout of Calumet at the district level in National Mine on June 1, then a 14-1 trouncing of Kingsley and four-inning, 15-0 blasting of Gladstone in the regionals at LaCombe Field on Saturday.

Standish-Sterling sneaked by Pinconning 1-0 in its opening district game on May 28, then took care of Tawas 10-0 in six innings and Sanford-Meridian 3-1 to finish the districts on June 1. In Saturday’s regional at Clare, the Panthers defeated Hesperia 9-0 and Clare 6-1.