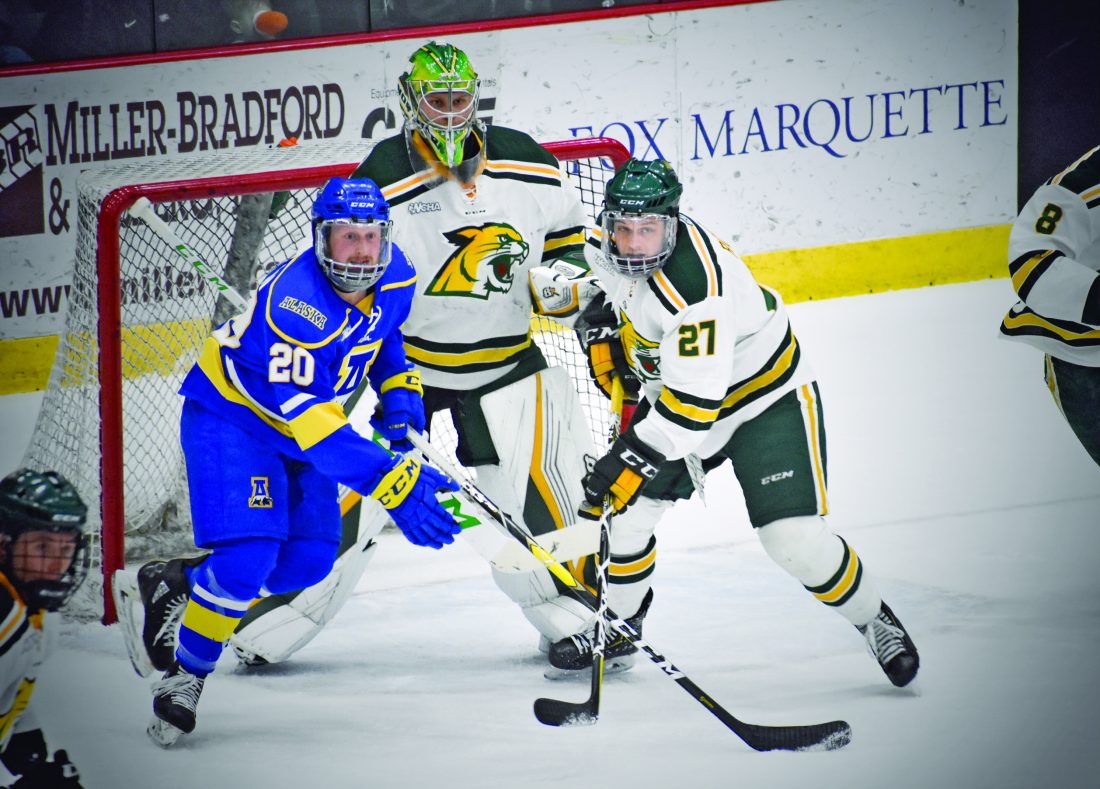 MARQUETTE — If you’re looking to find a guy who stands out on the Northern Michigan University hockey roster, defenseman Adam Roeder definitely fills that role.

It’s not due to his size, or how he plays the game, it’s where he’s from. The Wildcats roster is stacked with players hailing from hockey hotbeds like Michigan, Minnesota, New York, Colorado and of course, Canada. Last year, there were even two Californians on the team with Vincent de Mey and the now-departed Troy Loggins.

Roeder, on the other hand, hails from Missouri, a state where hockey may not be the first sport that comes to mind when you think about it. However, that probably changed a couple weeks ago when the St. Louis Blues won their first Stanley Cup.

Unlike states like Michigan or Minnesota where high school hockey is a sanctioned sport and run by an organization like the MHSAA or the MSHSL, hockey in Missouri is not.

In a recent phone interview, Roeder said that he always wanted to play high school hockey, especially because it gave him the chance to play with his older brother.

“I played both Triple A club and I also played high school as well,” he said. “I think St. Louis has a great high school league as well. I played for a high school called Chaminade College Preparatory and it was a great high school for me. I played four years of varsity hockey there and I got to play two years with my brother there. So that was something I looked into doing and I know my club coach didn’t want us to play high school hockey, but it gave me a chance for me to play with my brother and that was one of the main reasons why I got into hockey. I just wanted to play a couple years with him and to try to win a state championship in Missouri.

“There are some very good high schools. There’s two different leagues and the league that we played in was called the Challenge Cup, which was the top high school league. There are some high schools that are kind of well-known in the Midwest area. CBC (Christian Brothers College) is well-known. Chaminade is well known. SLUH (St. Louis University High School) and De Smet are usually your top four teams. The kids around the St. Louis area, a lot of them have played Triple A end up playing high school hockey because the high school hockey in Missouri is just great. The students come out and support and in the championship game, you get to play in the Enterprise Center (where the Blues play). Usually around 5,000 to 10,000 fans will be there to watch the state championship. It means a lot in St. Louis and it’s a huge rivalry between certain schools.”

Eventually, Roeder did have to move north, and to a smaller town. He suited up for the North American Hockey League’s Janesville (Wis.) Jets where he felt that he developed his game and it’s also where he caught the eye of NMU head coach Grant Potulny.

“I think the biggest thing that made me choose Northern was our coaching staff,” Roeder said. “From the get go, Grant called me right away and showed heavy interest in me right out of the Robertson Cup tournament. I talked to him a while and he told me everything that I wanted to hear. Also talking to (assistant coach) Byron (Pool) was huge because I knew him a bit from a couple of the guys I used to play St. Louis Triple A with and I talked with them and I kind of figured out that this was probably going to be the best coaching staff to help me develop my game and reach my goal, which all of us want to reach and that’s the pro level. Whether that’s the NHL or AHL or ECHL or whatever, it’s going to be the be the best opportunity for me to develop and move on to the next level. It was a pretty easy choice once I figured out that Grant was the new head coach at Northern and that he was going to turn this team around. I think he’s done that in two years since I’ve been here.”

Roeder’s path hasn’t been entirely smooth since he’s been here as he admits that things weren’t working with him early on last year, but that changed when he got put on the same defensive line with now-captain Phil Beaulieu.

“I think the biggest thing I’m going to take away from last season is that you’re going to have ups and downs,” Roeder said. “I was in and out of the lineup at the beginning of the year. For some reason, it wasn’t clicking for me right away and I just can’t get down on myself. I think the biggest thing is that when you’re going through a hard time, you look for teammates and you look to yourself to help pick you back up. And you work really hard in practice, and when you get that next opportunity, you have to take advantage of it. That’s what Grant was reiterating to me. That really stuck with me and I think toward the middle of the season, I just started saying that this is my opportunity to show that I can play at this level and be a big guy for this team going into the future and that’s what I did. I think it helped going into the second half of the year with Phil and I becoming D partners and we’ve really shown what we can do together.”

Roeder started seven of NMU’s last 10 games last season and four of them were during the Wildcats’ six-game winning streak. He feels that his connection with Beaulieu off the ice has also played a role in his success on it.

“He’s (Beaulieu) probably my closest buddy here and having that chemistry off the ice has really helped with our on-ice chemistry,” Roeder said. “When you trust someone and you know that he’s going to have your back, it really helps improve your game into the on-ice session. We just have a lot of fun together and it’s easy when you know someone’s is always going to be there and that’s Phil. I know that he’s got my back and I have his back. If he’s having a bad period or a bad shift or something, I pick him up and if it’s the other way, he picks me up.”

Roeder may have developed a friendship with Beaulieu, but when Game 7 of the Stanley Cup Final rolled around, he found himself all alone in the Blues cheering section.

“I was watching it with a bunch of the guys in Marquette,” he said. “We had probably about eight of us on the team at one of our teammate’s house. They were all rooting for Boston. So it was one St. Louis fan versus all Boston fans. It was like being in enemy territory, but the Blues pulled it out and I couldn’t be happier for the St. Louis community.”

When asked why the other Wildcats weren’t backing the underdog Blues, Roeder wasn’t sure, but he thought it was they were worreid over how he’d react of St. Louis won.

“I really don’t know,” he said. “I think the biggest thing is that they just didn’t want me to rub it in their faces. I guess some of them are Minnesota fans and Minnesota and St. Louis have a pretty good rivalry. The (Vancouver) Canucks had lost to Boston in Game 7 back in the day (2011), so they just wanted Boston to look better and it would make the Canucks look better then. There’s all these stories that they wanted to tell me, but the biggest thing was that St. Louis got it done in the end. I didn’t rub it in anyone’s faces. I was just starstruck by what happened.”

Roeder said the Cup means a lot to both St. Louis and Missouri, and especially his family, who have been backing the Blues from day one. He also said he was going to head down for the Blues’ parade and victory celebration last week.

“To be honest, I was at a loss for words,” Roeder said. “I’m 23 years old now and I’ve been a Blues fan my whole life. My parents took me to Blues games my whole life and I’ve been going to them my whole entire career that I’ve played hockey. It was something special to see a great group of guys win a Stanley Cup this season. The fans in St. Louis have been dying for this, 52 years in the making, and they finally got what they deserved and what they wanted. I still am starstruck by it and I can’t wait to get back home and kind of celebrate with my family.

“I actually fly out tomorrow morning to head back to St. Louis and I’ll be able to go to the parade. I’m pretty amped for that. I can’t wait to be down there and celebrate with my guys and just see what the city of St. Louis is all about when it comes to rooting for certain sports teams because there’s going to be a good 100,000 to 120,000 fans (the actual crowd total was closer to 400,000) in St. Louis rooting for the Cup and the Blues team that finally brought it home.”

Maybe now that Roeder’s long wait for a Cup has come to an end, maybe he’ll be the good luck charm that will help NMU get back to the NCAA Tournament this season.