Back atop the Upper Peninsula: Marquette girls pull out victory in last event at U.P. Division 1 track finals 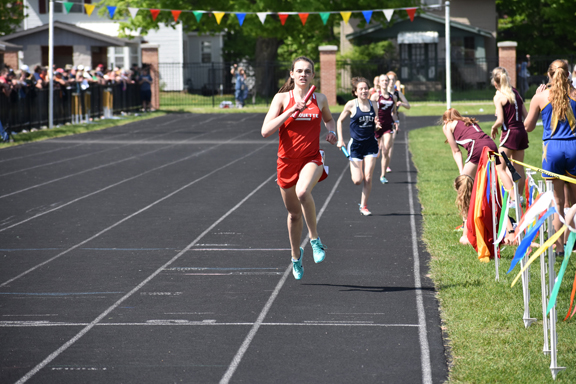 “I just wanted us to win so badly and we did.” — Delaney Sall, 1,600-meter relay anchor, Marquette girls track and field

KINGSFORD — The Marquette and Negaunee girls track and field teams have had quite a battle the last three years at the Upper Peninsula Finals with the Miners ending the Redettes’ seven-year run as Division 1 champions last year.

On Saturday, Marquette was looking to reclaim its crown, but to pull it off, it needed to have a good performance in the final event of the afternoon, the 1,600-meter relay.

The pressure may have been high, but the Redettes came through, winning the event and the meet, edging the Miners 106 points to 100. It was part of Marquette’s sweep of the four relays.

“I knew it would be a battle,” Redettes head coach Natalie Messano said. “I didn’t think it would be this close. We did have a couple of our field event places didn’t finish necessarily as high as we expected. A couple of things, the 100 didn’t go exactly as I’d hoped it would, but they’re (the Miners) always tough. We compete against them all year long and we go back and forth. It’s always a battle.

“It’s been a great season and it’s been a great ride. Sadly, we are going to lose a handful of girls, but we also have a few freshmen that are here this year and several sophomores, so we still have a strong core that will be left behind.”

The win was extra special for Delaney Sall, who ran the anchor leg of the 1,600 relay. This will be her last year with the Redettes as her father, Bill Sall, recently left his position as the head men’s basketball coach at Northern Michigan University. Sall is now the head coach at Calvin College and Delaney will compete downstate next year.

“I’m so happy. We were ahead of Negaunee by only three, so we had to win. I’m moving this summer, so this is my last race in Marquette. I just wanted us to win so badly and we did. It’s such a good way to close out being here.”

For the Miners, it wasn’t the outcome they were hoping for, but it still was an impressive day as the two teams were neck and neck all day.

“To say I’m proud of these girls is an understatement,” Negaunee head coach Vickie Paupore said. “It’s amazing what they’ve accomplished in this meet and this season. We graduated some quality seniors last year and I didn’t think we’d be on the radar for a possible U.P. title again at the beginning of the year.

“And these girls have come on so strong and I’m inspired by their performances today.”

Negaunee was led primarily by Emily Paupore and Chloe Norman, both of whom won more than one event. Paupore took first in the 800, 1,600 and 3,200 runs, while Norman finished on top in the 300 hurdles and high jump. Abbie Tollefson also added a victory to the Miners’ total as she won the discus.