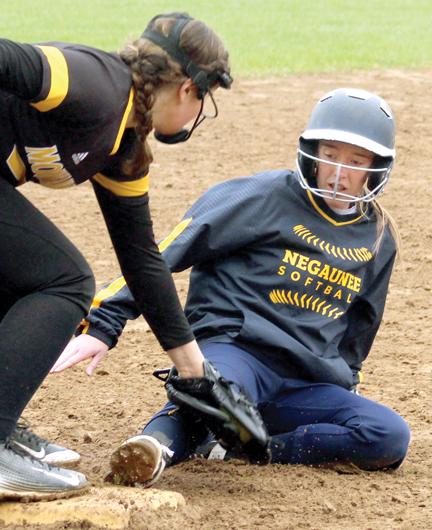 NATIONAL MINE — The conditions weren’t ideal for softball Wednesday afternoon, but the Westwood Patriots still managed to put several runs on the scoreboard in a doubleheader sweep of L’Anse.

Westwood won the first game 12-2, then took the second game 10-5 in five innings.

Patriots head coach Jared Koski was happy with his team’s performance, especially dealing with a heavy mist throughout the afternoon.

“We played in 46-degree weather in a misty rain, but we got our work done and getting two wins is a solid day,” he said. “I give the L’Anse kids credit. They came out on a not-so-nice day and they came to play.”

In the opener, the Patriots got on the scoreboard quickly with two runs in the top of the first inning. Westwood added another run in the second, but the Purple Hornets got two runs back in the bottom of the third.

However, the Patriots wouldn’t be denied as they pushed across two runs in the fourth and kept rolling.

Karlie Patron got the win in the pitching circle for Westwood, throwing a one-hitter with four walks and 11 strikeouts. Josie Rice took the loss for L’Anse after giving up 14 hits with six walks and four strikeouts.

In the nightcap, Westwood scratched across a run in the bottom of the first, but the Purple Hornets answered with three in the third.

However, the Patriots racked up five runs in their half of the frame to take control and padded their advantage with four more in the fourth to break the game open.

Allie Radcliffe got the victory for the Patriots, giving up five hits with three walks and two strikeouts, while Kailyn Voskuhl was handed the loss for the Hornets after surrendering seven hits and four walks with three strikeouts.

Ellie Miller went 3 for 3 at the plate for Westwood, while Koski hit a two-run double and Prophet went 1 for 3 with an RBI.

At Iron Mountain, the Miners used some smart hitting and solid pitching outings from Skylar Hall and Abby Nelson to sweep a doubleheader.

“We have had a couple of girls that have hit well all year but different girls continue to step up. We’re solid from No. 1 through 9.”

In the first game, the Miners got on the scoreboard with two runs in the bottom of the first and added another in the second. Up 3-0 in the third, Negaunee pushed across six runs to build up a nine-run lead and cruised.

Hall got the win for the Miners, giving up just two hits and one walk with nine strikeouts, while Claire Mongrain was handed the loss for IM. She gave up 13 hits and two walks with zero strikeouts.

In Game 2, the offenses got off to good starts. After each team scored twice in the first inning, Negaunee took the lead with a run in the second before plating two more in the third.

After IM got one run back in its half of the third, the Miners busted loose with six runs in the fifth to take control.

Nelson earned the victory in the circle for the Miners, giving up four hits and eight walks with eight strikeouts. Hannah Proudfit took the defeat for IM after surrendering 10 hits and nine walks with zero strikeouts.

Saylor Swartout had two hits for the Mountaineers.