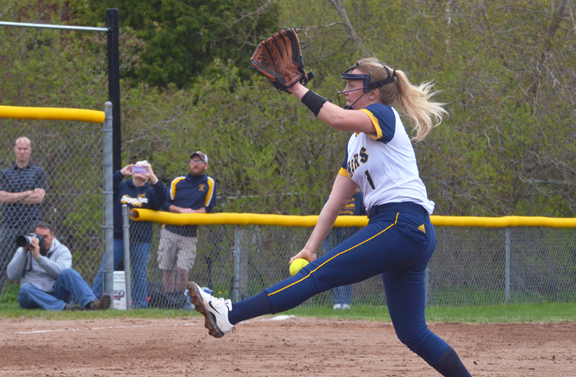 “It’s something that, odds are as things go along, we’re going to need both of them.” — Randy Carlson, Negaunee softball head coach, on Miners’ pitchers Abby Nelson and Skylar Hall in the MHSAA tournament

NEGAUNEE — The Negaunee High School softball team had one more opportunity to work out its kinks ahead of the district tournament on Saturday.

The issue, or nonissue in the case of the Miners, is that there weren’t too many kinks to work out at all.

Negaunee allowed just three hits while the pitching duo of Abby Nelson and Skylar Hall combined for 12 strikeouts and just two walks in a 4-1 victory in just the single game played at LaCombe Field.

The Miners’ lineup managed just six hits, but the offense was timely.

Negaunee finishes the regular season with a record of 25-6 going into an MHSAA Division 3 district semifinal tilt with Westwood on Saturday.

NHS head coach Randy Carlson credited his pitchers for their late-season performance, noting that their services will most certainly be needed in any kind of extended playoff run.

“Both of them looked good and sharp,” he said of Nelson and Hall. “It’s really nice to have two pitchers like that. It’s something that, odds are as things go along, we’re going to need both of them. It’s great to have two (pitchers) and I feel very comfortable with either one of them out there.”

Hall also contributed at the plate, ripping a ball toward first base which deflected off of Flivvers first baseman Tori Kowalkowski and into center field, allowing Miners base runners Mykenna Kontio and MacKenzie Karki to come around to score, making it a 3-1 game with two outs in the bottom of the fourth inning.

“Skylar, who hasn’t batted much all year, came up with a big two-RBI hit with two outs,” Carlson said. “Overall, though, we left way too many runners on base, especially the last two or three innings.

Despite leaving runners stranded, Carlson was pleased with his team’s overall performance against a worthy Flivvers squad.

“Kingsford’s got a good team so it was a really good tune-up before the districts to play a good opponent like that. It forces you to make good plays. Sometimes you can get away with not the greatest execution, but (Kingsford) is a solid team and forced us to execute.”

Negaunee struck first in the bottom of the second. After an attempt to throw Payton Drew out on a steal at second base, Allie Ennett came home from third to make it 1-0 Miners.

Kingsford scored its lone run in the third on a double to center field from Liz Cross, which scored Paige Jacko to knot things up 1-1.

After Hall’s two-run hit made it 3-1, Negaunee added insurance in the fifth on a bunt by Nelson. She reached on the attempt to throw Karki out at home that was ruled not in time to make it 4-1.

Hall earned the win in the pitcher’s circle, relieving Nelson after the third. Nelson finished with three strikeouts and a walk, while Hall ended the night with nine K’s and one walk while allowing two hits.

Cross led the Flivvers, going 1 for 3, while Maggie Strehlow was tabbed with the loss in the pitcher’s circle, going four innings and allowing three runs on two hits, fanning one and walking four.

Negaunee faces Westwood (19-4) in the Division 3 district at 10 a.m. Saturday, while Houghton and Calumet follow with their semifinal at noon. The championship is set for 2 p.m. with all games to be played at the Patriots’ Tilden Township Ball Field in National Mine.

“Westwood is a very good team and it’s going to be very similar to this one,” Carlson said. “You’ve got to pitch well, you’ve got to play good defense and try to score some runs to beat them.

“That’s why I was happy (on Tuesday) playing this kind of competition.” 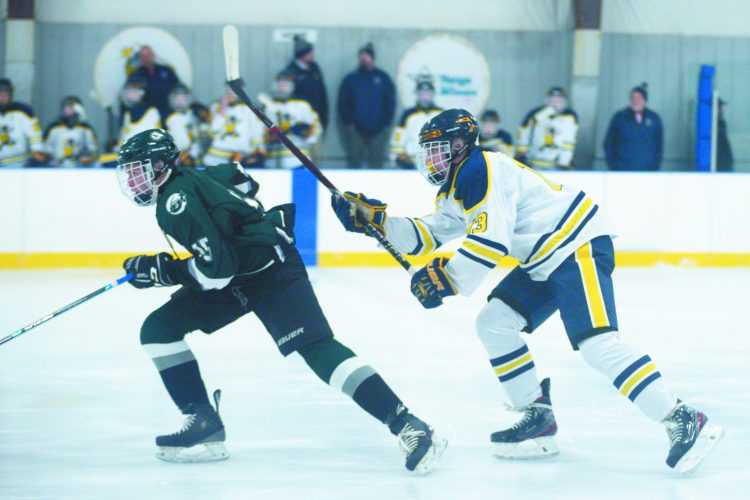