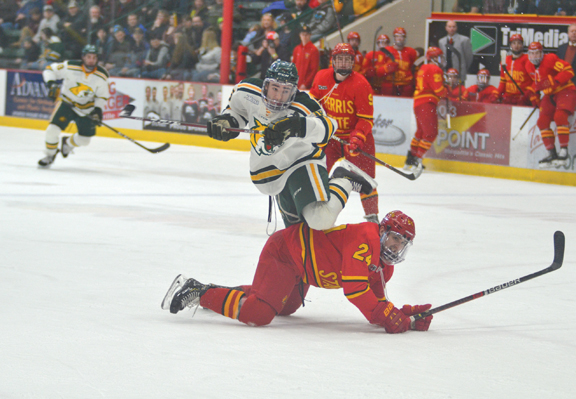 Northern Michigan University’s Rylan Yaremko jumps over Ferris State’s Craig Pefley in an attempt to get the puck on Dec. 15 at the Berry Events Center in Marquette. (Journal photo by Trinity Carey)

Northern Michigan University’s Rylan Yaremko jumps over Ferris State’s Craig Pefley in an attempt to get the puck on Dec. 15 at the Berry Events Center in Marquette. (Journal photo by Trinity Carey)

MARQUETTE — The college hockey season is months away, but the Northern Michigan University team took its first step toward that this week.

The Wildcats have announced their 2019-20 schedule and it’s an interesting slate. NMU opens the year with an exhibition game against the United States Under-18 National Team Development Program in downstate Plymouth on Oct. 5.

Northern head coach Grant Potulny said he made a promise with then-U.S. National Junior Team general manager Jim Johannson to bring the Wildcats down for a game and he’s fulfilling his part of the deal.

“I remember when I did it,” Potulny said. “We were walking in Buffalo (New York) at the World Juniors and he said ‘It would mean a lot to me if you’d bring your program in to play us at home.’ He said ‘We’ll obviously come back to play you,’ but I said I’ll do it and I’m going to honor that promise I made to him. So that’s kind of how that game came about.”

Northern then opens the regular season with a home series against Big Ten opponent and former CCHA rival Michigan State on Oct. 11-12. The Wildcats split with the Spartans last season in East Lansing, losing the first game on a late goal and an empty-netter, but winning the second on a power play tally by forward Darien Craighead.

“They’re a quality program that plays in a quality league that’s going to get quality wins against other quality teams,” Potulny said. “Getting them up here on the competition side is important for us, but also, it’s an old rival to our fans and an old rival for our program. I think the community will enjoy seeing Michigan State up here again.”

After that, NMU heads out for its first road series as it takes on Boston University Oct. 18-19. The Wildcats won their lone national title back in 1991 with a triple overtime win over the Terriers, so the series will be a special one. BU underachieved a bit last season, falling in the Hockey East semifinals and missing the NCAA Tournament.

“Their coach is a friend of mine and when I had gotten this job, we talked about playing each other,” Potulny said of BU’s Albie O’Connell. “He was the assistant coach there at that point and you don’t always have full control of the schedule at that point, but when he did, he called me last summer and said ‘Hey we’re open. Do you guys want to play?’ and it ends up kind of falling on the anniversary of the 1991 (national championship) team.

“I thought it’d be great to see those guys (the 1991 team) the following year come back to Marquette. To invite all the guys back from the team and kind of have a celebration of their team and their championship against BU in our building, I thought that would be fun.”

The Wildcats then go to WCHA foe Ferris State Oct. 25-26, who they swept in Marquette last year, before returning to the Upper Peninsula for three straight home series.

Northern begins the homestand with Alabama-Huntsville Nov. 1-2 followed by two games against NCAA Tournament participant St. Cloud State Nov. 8-9 and then Alaska-Fairbanks Nov. 15-16. The ‘Cats took three points from the Chargers in Huntsville last year, but were swept by the Huskies in Minnesota. NMU faced the Nanooks in the first round of the WCHA playoffs and emerged with two wins in a hard-fought series.

“They (St. Cloud) were playing at a level that was almost a perfect storm last year for them,” Potulny said. “They were a motivated team that was returning almost everybody. They had lost in the first round (of the NCAA Tournament) and that gives you motivation initially. Then with the addition of a new coach, I think any time that there’s a good change in coaches, there’s a little more of a bump of intensity and attention to detail.

“I kind of told our guys that I don’t know if I’ve seen a team in all my years, whether it was Boston College or North Dakota or Wisconsin or whoever you want to say, that was playing as well as they were that early in the season. They did that to everybody. They did not lose one game at home all year. The message I tried to send is that you just wash this one and hopefully, we’ll get a chance to see them at the end. It’s just impossible to play at that level throughout the course of the year.

“They’re going to be as tough of a (series) as we’ll have all year. That will be the fastest game that we will have since I’ve been part of our program. We’ll be at home and they play on an Olympic sheet, so they’re not going to be surprised by the ice. So that game, I think, will be the definition of a track meet.”

NMU closes out the month with a home-and-home series with rival Michigan Tech Nov. 22-23 (Saturday game at home) and then a road series at Huntsville Nov. 29-30. After a week off, the Wildcats end the first half of the year with two games against Minnesota State in Marquette Dec. 13-14. NMU went 3-1 against their fiercest U.P. rival last year, but things didn’t go well against the conference-winning Mavericks. Mankato swept the Wildcats in Marquette, including an 8-2 blowout defeat Saturday night.

The Wildcats return to action Jan. 3-4 with a series against Bowling Green State, which eliminated Northern in the WCHA semifinals last season, and then a home matchup with Alaska-Anchorage Jan. 10-11. NMU took all four games against the Seawolves last year.

Northern has its last nonconference series of the year Jan. 17-18 against Cornell. The Big Red made the NCAA Tourney last year and shut down the Wildcats in a sweep at the Berry Events Center, holding NMU to only 13 shots in one of their wins.

“That was kind of in that stretch of the year where it was a funny time for us,” Potulny said. “It kind of started with the St. Cloud thing and it was kind of hanging over us a little bit. We were winning some games and we were beating teams, but we hadn’t found our stride yet. Getting them at home was an opportunity for that, but we played better on Saturday.

“Going to their arena is going to be a challenge, but what I really like about that series is the timing of it. You get a chance to really get your fingers into your team and be able to fix some things under the hood. So you’re kind of fine-tuned by that point and it gives you another chance to get some nonconference wins versus a quality opponent.”

The road trip continues with a long jaunt to Alaska to face the Nanooks Jan. 24-25 before the Wildcats return home to face Ferris Jan. 31 and Feb. 1.

Then they head to Mankato Feb. 7-8, but come back Valentine’s Day weekend (Feb. 14-15) for their last two-game home series of the season, this one against Bemidji State, who the Wildcats split with at home last year.

The season wraps up with a road trip to Lake Superior State Feb. 21-22 and another home-and-home with MTU Feb. 28-29, the Friday game at home.