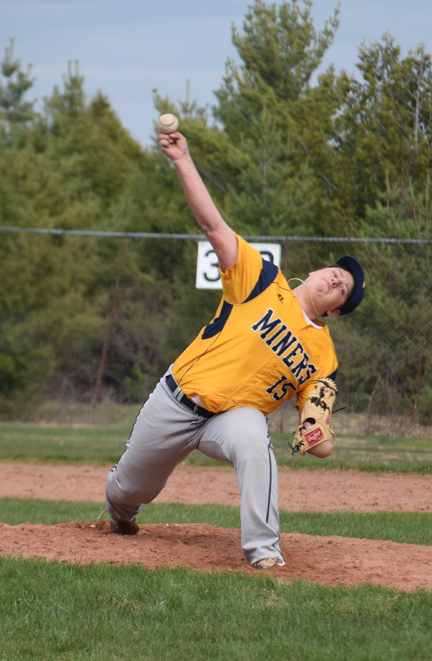 KEARSARGE — The Negaunee High School baseball team has been working hard in the batting cages over the last few weeks, honing their skills at the plate.

The Miners’ hard work paid off on Tuesday as they slugged their way to a sweep of Calumet at Wolverine Field. They won the first game, 12-2, on the mercy rule and the second one, 4-0.

“I thought it was the best baseball we’ve played all year,” said Miners manager Jason Siik. “We’ve been working hard on hitting and even our outs were hard hit balls. We played good, clean baseball.”

Negaunee’s hit parade began in the first inning of the opener as Eric Anderson led off with a single. First baseman Alex Munson came up two batters later and punched an RBI line-drive double to left center. Three batters after that, third baseman Adam Ogea smacked a double up the middle, and when the inning ended, the Miners scored four runs.

Calumet (5-11) got one back in their half of the first, but the Miners tacked on two more runs on four hits in the second to make it 6-1.

The Miners put Alex Zampese on the mound while the Copper Kings went with hurler Isaac Bennetts.

Zampese and second game starter Jadan Grobar did what any high school pitcher should do. They put the ball across the plate.

“I really liked our starting pitching,” Siik said. “They threw strikes. Neither are overpowering, but they hit the corners and put the ball in play. Our catchers did a great job of calling the game as well.”

While Calumet was able to put the ball in play, it had a hard time penetrating Negaunee’s tough defense.

Adding to their problems, Calumet struggled in the field.

“We had too many fielding errors and missed too many fly balls,” Calumet manager David Yeo said. “You cannot do that and plan to win games.”

The first game ended in the fifth inning on the mercy rule as the Miners went up by 10 runs.

The hit parade continued in the second game as Negaunee put up two runs as Anderson, Logan Fish and shortstop Carter Richardson all got base hits in the first inning and crossed home for a 3-0 score.

In each games, the Miners were quick on the basepaths. Once they arrived on first base, it became apparent they would steal second.

“Everyone has got the green light,” Siik said. “Again we work hard at that. Our players were getting good reads and great jumps. I think we’ve stolen more than 60 bases this season so far.”

Meanwhile, the Copper Kings were having a hard time making it to first base. The Miners shut them down in the field and made two double plays in the second game.

While Yeo was wondering what happened to his hitters in the second game, he was pleased with the work of starting pitcher Dan Tarnowski. In short, he threw strikes.

“Pitching in the second game was good, but we couldn’t get any runs to back us up,” Yeo said. “It is something we are going to have to work on.”

Calumet was not able to put anyone across the plate as Negaunee’s Grobar tossed a complete-game shutout.