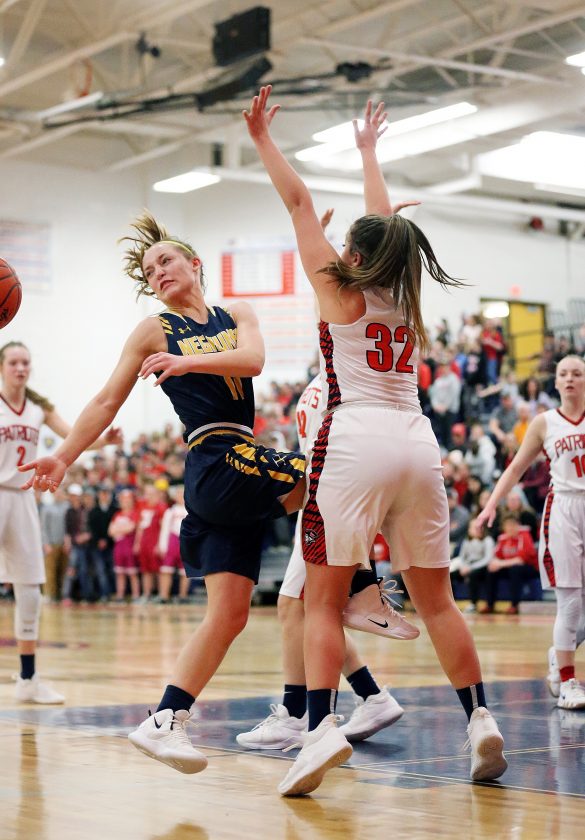 Negaunee's Hannah Voskuhl, left, quickly dumps off a pass after running into the defense of Westwood's Karlie Patron in the second quarter of their MHSAA Division 3 district tournament game played at the Patriots' gym on Monday, March 4, 2019. (Photo courtesy Daryl T. Jarvinen)

LANSING — The Michigan High School Athletic Association has made some important changes to the playoff rules in its high school postseason football and basketball tournaments.

Both sports will see changes in the way teams are seeded or selected.

The changes were approved at the spring meeting of the MHSAA’s Representative Council held Sunday and Monday in Gaylord.

The Representative Council is a 19-member legislative body of the group’s more than 1,500 member public and private schools, which includes 750 senior high schools.

The council considered 26 committee proposals dealing with eligibility, tournaments and operational issues, according to a Wednesday email from the MHSAA.

In boys and girls basketball, every team will qualify for the tournament as has been done in the past. Starting this winter, though, seeding of the top two teams in each district tournament will guarantee those squads won’t meet before the district championship game.

Those top two teams will be determined using a Michigan Power Ratings computer formula based on regular-season results against other MHSAA tournament-eligible teams and opponents’ strength of schedule. That will mean games against non-Michigan nor non-MHSAA member schools will not count in the formula.

Brackets will be drawn two weeks before the districts start, placing the top two teams on opposite sides of the bracket, then randomly selecting the other teams’ positions.

The process won’t guarantee seeded teams receive byes or play at home. And it is only used for the districts, not for later rounds, including regionals.

A seeding proposal has been touted by the Basketball Coaches Association of Michgan for several years.

This past winter, the MHSAA switched placement of teams from Classes A through D to Divisions 1 through 4. Because nearly every member school plays basketball and the classes and divisions are each divided into four groups, nothing changed for the vast majority of schools.

Several area schools were affected, however. Negaunee moved up to become a small Class B this school year, but because of the divisions, still remained in Division 3, the equivalent of Class C.

The same was true for Munising, which became Class C but remained in Division 4 (equivalent of Class D) in basketball.

The MPR is being used this spring for the boys lacrosse tournament and will be used for Lower Peninsula soccer tournaments beginning this fall, too.

The new football tournament rules won’t take effect until the fall of 2020.

In 11-player football, they are designed to reward teams that play more successful opponents.

The eight divisions will now be determined before the season begins with 32 playoff qualifiers coming out of each.

Instead of automatic qualifiers granted for all six-win teams — or five wins for teams playing eight games — the MHSAA will go back to a playoff-points average system similar to what was used before the field was doubled in 1999.

The adjusted playoff points formula is similar to what has continued to be used to determine first-round matchups, along with home teams in the first three rounds of the playoffs.

In effect, bonuses can be earned for a “good loss,” a proposal the MHSAA’s Football Committee believes will take away the incentive of not playing the most successful opponents to insure six wins.

That has been a common reason cited for the breakups of leagues and conferences around the state.

In eight-player football, a set enrollment limit of 215 students has been set to be eligible for that tourney, rather than requring schools to Class D-sized, a enrollment number that changes annually.

What will remain is a one-year grace period for schools that exceed that limit, in case of a one-time enrollment bump that doesn’t last.

In addition, the council approved adding limited video review of potential and actual scoring plays and potential and actual turnovers at the MHSAA football championship games in both 11-player and eight-player tourneys. TV coverage at those state finals uses enough cameras to be able to implement this feature.

Several other changes in football include some involving safety by revising definitions and limits on contact allowed at practices. The changes, which take effect this fall, are a collaboration between the MHSAA, Michigan High School Football Coaches Association and “Practice Like Pros,” a national movement dedicated to safety in high school football.

Other more technical aspects of rules in many sports were approved, such as setting a maximum allowable score of 12 on any golf hole to help improve pace of play.