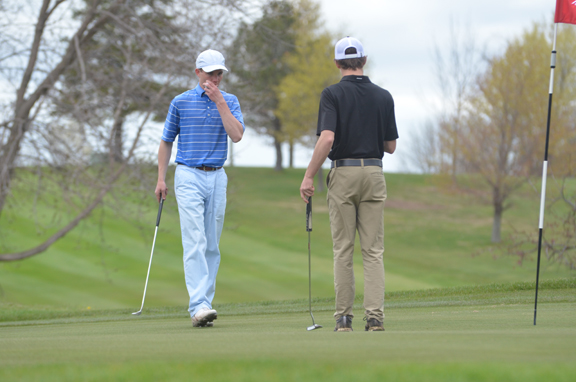 Marquette senior Jordan Jurmu, left, and Escanaba junior Trevor Denome consider their next shots on the green at the third hole on the Marquette Golf Club’s Heritage course during the Great Northern Conference finals on Thursday. (Journal photo by Ryan Spitza)

MARQUETTE — Great Northern Conference golf teams were able to get one final tune-up in ahead of next week’s MHSAA Upper Peninsula Division 1 finals.

While Thursday’s 18-hole finale at the Marquette Golf Club’s Heritage course was the last before Wednesday’s U.P. Finals, there were still trophies, medals and accolades to be awarded in the GNC finale.

The Menominee girls picked up the tournament win with a team score of 418, giving the Maroons the season championship as well.

Marquette did the same on the boys side, shooting a team 328 on the day while also earning the season title.

The Esky boys were runners-up in the tournament by five strokes to Marquette with 333, followed by Gladstone with 356, Menominee with 413 and Kingsford, which did not compile a team score.

The Redmen claimed the boys season title with 28 GNC points to the Eskymos’ 26. Kingsford was third with 12 followed by Menominee with 11 and Gladstone 10.

GNC First and Second Team accolades, as well as GNC Player of the Year accolades, were also presented.

Escanaba senior and Northern Michigan University commit Paxton Johnson earned girls Player of the Year for the second season in a row, compiling 75 individual points. Esky’s Nathan Rousseau took Player of the Year honors on the boys side with 66.5 points, edging Gladstone’s Rudy Peterson with 65.5.

“It feels really great,” Johnson said. “Especially as a senior. Just being able to do it two years in a row.

“I wasn’t playing super well (today) but I kind of grinded it out. I think that’s really important for my mentality, and I’m going to try to keep the same mentality for U.P.’s.”

Johnson shot 84 on the day for the Eskymos, earning girls medalist honors.

Rousseau shot 79, good for second place in boys medalist slots. He was edged by Gladstone’s Cam Ballard, who led the boys field with 78.

Much like Johnson, Rousseau stated it wasn’t his best day on the course. He also kept things real when asked about the Player of the Year accolade.

“It feels good,” he said. “I played solid the whole year but I never really jumped out or won anything. I just kind of stayed there. It was nothing flashy. No blowups or crazy rounds.

“I struggled (today) actually. Pretty heavily. I had a lot of bogeys, a lot of bad swings, and a little mistake on (hole) 11. Other than that, I made a couple of birdies and came through at the end a little bit solid.

“I didn’t win (today), but I played well enough to win the conference, so that’s pretty cool.”

The Menominee girls were led by Emma Hofer, Arikah Bellisle and Josie Hofer, who finished second, third and fourth on the day, respectively, with rounds of 98, 99 and 100. Madison Derusha rounded out the top 10 with 121 for the Maroons, while Olivia Badker was 12th with 124.

“It’s much better to be on this side,” he said. “It’s the same as it’s been all season. We have different girls playing well. All five of them contributed big parts all year and did it again (today). Emma and Arikah and Josie were our top three (today), but that’s fluctuated all year round.”

Looking ahead to the U.P. finals, where the Division 1 girls teams will play at Sweetgrass Golf Club in Harris, Hofer said it’s a goal to keep their undefeated season alive.

“This was one goal,” he said. “For the girls, it’s kind of nice. They’ve gone undefeated so far this year, so they’ve got that to play for and continue. They’re excited because they get to play a course they’ve never played before in Sweetgrass. We’ll get a practice round in and try to learn a little bit about it.”

Morgan Rhoades was the top girls finisher for Marquette in fifth place with 101. Kingsford earned two top-10 finishes, with Kate Cook finishing in sixth shooting 110 and Haley Gabriel in eighth with 117.

The Marquette boys were led by seniors Tyler Bergwall and Jordan Jurmu, who finished third and fourth, respectively, with 80 and 81. Peterson also tied Jurmu with 81 while Joe Luke was sixth for the Redmen with 82. Karsten Kamps was the final top-10 finisher for Marquette in eighth with 85.

The Marquette boys also took a backseat to Escanaba in the GNC title race last season, finishing in a tie with Gladstone in the runner-up position and falling to the Eskymos by three points.

“It feels good,” MSHS head coach Ben Smith said about the season title. “Esky has been really solid, not only in the conference play we’ve had in the last few years, but their U.P. finals finishes have also been really good. They’re coming off of a U.P. championship and returning basically their whole team.

“All year that was who we were looking at, because we knew they were bringing back the players they were.”

The two teams have flip-flopped wins all season in the nine-hole meets, evening things up for a winner-take-all 18-hole finale.

After competing in the Marquette Invitational under rainy skies Wednesday, Smith believes that moving from poor to fair conditions helped his team Thursday.

“The weather was worse, conditions were soggier and just trying to avoid the rain (Wednesday), I was hoping it would prepare us a little bit better for the conditions (Thursday),” he said. “It was pretty nice out there to start. The wind picked up and got a little cooler and the course was definitely playing tough.

“All the kids battled through it. They’re used to it. The whole spring has been this way. As a team you like to throw in a low score or two, but our consistency for the last week or two has really been where it needs to be.”

The Redmen landed three players on the All-GNC First Team, who were Bergwall, Jurmu and Luke. Peterson and Rousseau joined the Marquette trio in the honor.

Menominee led the First Team accolades for the girls with both Hofers along with Bellisle earning honors. Rhoades and Johnson also made the First Team.

Derusha and Badker made the Second Team for the Maroons, as well as Cook and Gabriel for the Flivvers and Macie Carlson of Escanaba.

The U.P. Division 1 golf finals take place on Wednesday, with the boys competing at the Escanaba Country Club.