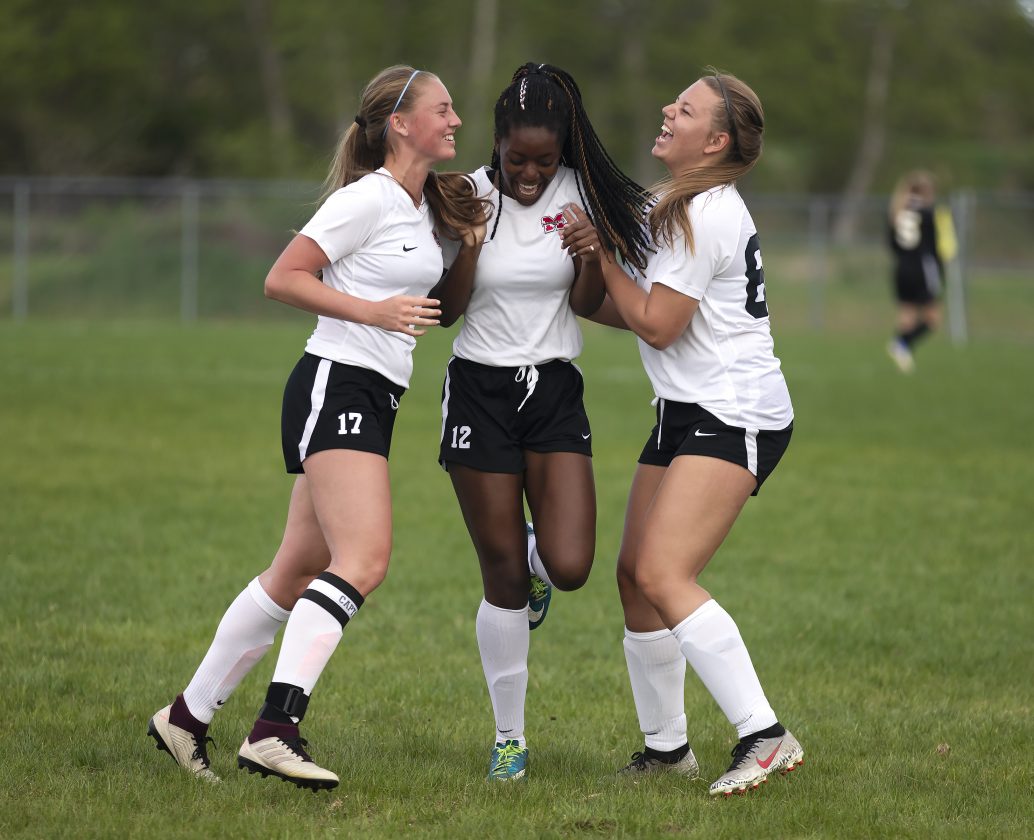 KINGSFORD — A second-half goal stemming from a penalty kick was enough for Iron Mountain to hold off Marquette 2-1 on Tuesday evening.

The Mountaineers (5-3) got the winning goal from Reagan Lundholm, who scored on a rebound from her own penalty kick in the second half.

“She had the rebound, took her time and didn’t panic,” IM head coach Steve Hodgins said. “She’s a smart player. I had faith in her that she would put it away.”

Marquette tied the game earlier in the second half with a long kick from Ketlove Gray, who was moved up from the defensive line. She was substituted onto the field just seconds before her tying goal.

“She normally plays defense but she got sick toward the middle of the season, so she wasn’t playing for awhile,” Marquette head coach Anna Bauers said. “I know, because I’ve coached her before, she has a rocket of a shot. I was like ‘You played outside for me before. Let’s put you out there.’ Ten seconds in … it’s funny because she’s played there for me two times before and the last time, she scored 15 seconds in after putting her out there. She did what I wanted her to do.”

Gray kicked the ball from well beyond the 18-yard stripe. A deflection off a Mountaineers defender sent the ball into the net.

“There was some unfortunate calls in the beginning of the second half. That kind of makes me a little bittersweet, but Iron Mountain is a good team.

“I’m looking past that and I’m looking to what the season was. The girls exceeded my expectations every day. That’s what I’m focusing on. I enjoy playing Iron Mountain because they do give us a good battle every time.”

IM’s seniors left the Commemorative Field pitch for the final time as winners, while Marquette players posed with the conference championship trophy.

“Almost another year. With not having Riley Poupore around, we just let some close games slip away,” Hodgins said of the senior out with an ACL tear. “She was a big factor (for us) last season being our main scorer. Something to aim for next year is get that trophy back.”

It was a midfield game with ball possession fought across the middle third.

Olivia Stanchina gave IM the early advantage with a goal in the first half.

Marquette applied pressure to start the second half, with multiple scoring chances narrowly missing the goal. The Mountaineers weathered the pressure until Lundholm was fouled inside the 18 with about 10 minutes remaining. The penalty kick was initially saved and deflected straight up. Lundholm played the ball off her chest and booted in the rebound.

Marquette kept the pressure with more close scoring chances down the stretch. Gray nearly had a second long kick go in the net, but the ball drifted just beyond the crossbar.

“If they have pressure and it doesn’t turn into shot-making, that’s what we’re OK with,” Hodgins said of enduring Redettes’ offensive pressure. “With pressure, we just have to collapse on them and make it difficult for them to get a good angle on the goal and get a good shot off on the goal. I think our girls did that. Even their goal, the girl had a good shot.”