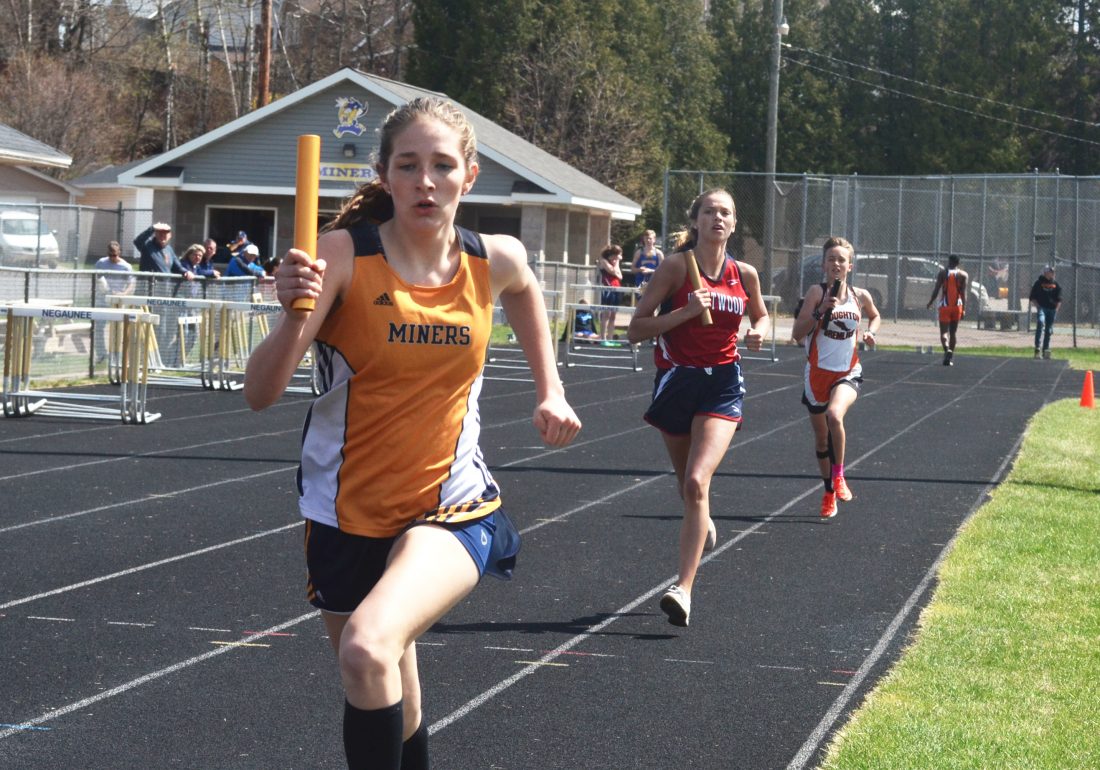 NEGAUNEE — The goal for teams is to get as many athletes to qualify for the June 1 Upper Peninsula track and field finals when competing at MHSAA Upper Peninsula regional meets.

It’s one of the rare occasions where winning a team title gets put to the side, but two local teams came out on top anyway Thursday at the Division 1 regional as Westwood won the boys championship, while Negaunee won the girls.

“You want to qualify as many kids as you can,” Patriots head coach Scott Syrjala said. “It’s nice to see our kids competing hard.

“We’ve got some veterans, some juniors and seniors, but we have a lot of freshmen and sophomores too that are running for us and they’re learning how to compete. We’re doing pretty well so far.”

The top four individuals in each event and top four teams in the relays qualify for U.P. Finals. In those boys relays, the Patriots won two of the relays (800- and 400-meter), while Houghton took the 3,200 and Kingsford the 1,600.

The 400 relay was a particularly competitive race as Calumet had the lead, but Westwood’s Nathan Beckman caught up to the Copper Kings’ anchor runner and caught him a few yards in before the finish line as the Patriots edged Calumet for the win, 46.25 to 46.49 seconds.

“I think we’re having a good day as a team so far,” Beckman said. “We’re doing what we need to do and coming up big in a couple of spots. We’re just getting the job done. I like our relays right now. I think we have a really good shot there (at U.Ps).”

Charlie Gerhard picked up two wins for Iron Mountain in the two hurdles events, 110 and 300, while Negaunee and Calumet also took home two victories each.

In the girls meet, Negaunee notched seven victories from just two athletes. Emily Paupore won the 800, 1,600 and 3,200, while Chloe Norman won both hurdles, the high jump and the long jump.

Paupore, who is getting looks from some NCAA Division I programs, got to run the 800 for the first time in awhile and was excited about it. She’s also grateful that she gets a chance to run this year.

“Today’s going pretty well so far and I’m excited to run the 800,” Paupore said. “It’s something that I haven’t ran a lot this year, so I’m excited to see what I can do in it and push myself as hard as I can.

“I’m more of a long distance runner, but I wanted to do this for my team. We have a good chance of winning today, so I wanted to get as many points as I could for them.

“I’m just happy to run again after coming off a stress fracture and everything. I feel so blessed that I have the ability to do that.”

While Paupore loves to run distances, Norman, on the other hand, is all about jumping, which is important considering the events she competes in.

“Hurdles are definitely my favorite because it’s all versatility,” Norman said. “It’s not just a dead sprint. You have a little mix and I really like to jump. All of my events have jumping and that’s fun.”

Calumet won the other relay (400) and Westwood’s lone win came in the pole vault, which was won by Katelyn Anttila.

The Patriots may only have picked up one individual victory, but head coach Eric Hill wasn’t focused on the wins. He was looking at having as many of his kids as possible get to Kingsford for U.P. finals.

“I think we’re doing fantastic,” he said. “We qualified our 4-by-800 and Allyssea (Smith) qualified in the hurdles, Tessa (Leece) in the mile and Elizabeth (Williams) in the 400.

“We knew that Negaunee and Houghton would be tough today. We were just trying to get as many kids as possible because that’s a fun thing to do. I feel like we’re starting to peak at the right time.”

For the full list of U.P. Finals qualifiers from this meet, see page 2B.