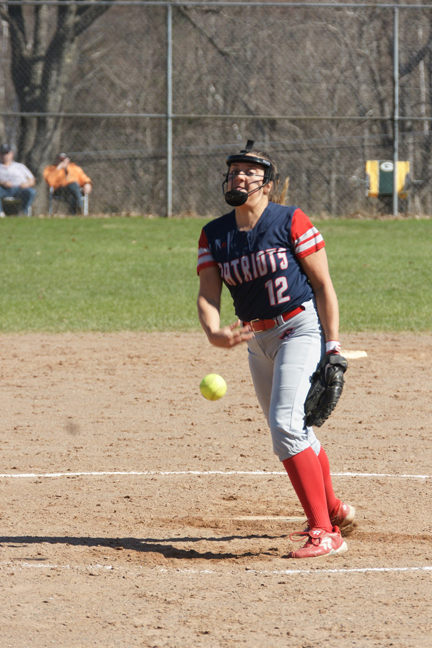 Westwood junior pitcher Karlie Patron pitches in a home doubleheader versus Iron Mountain at the field in National Mine on Monday afternoon. (Photo courtesy Sandy Maki)

ISHPEMING — It was a nice day to play softball, so the L’Anse High School team made the drive to Ishpeming for a doubleheader on Monday afternoon.

The games were scheduled over the weekend after a scheduling mix-up left the Hematites high and dry after Kingsford had to cancel its Monday twinbill in Ishpeming.

The teams that did play split the double dip, the Hematites winning the opener 9-3 before the Purple Hornets came back for a 14-3 victory in the nightcap.

Ishpeming trailed until putting together a five-run fifth inning in Game 1 to take a 7-3 lead.

“We gave up three runs in the first inning, then we played outstanding defense after that,” Hematites coach Ben McGuire said.

A key play that kept Ishpeming within striking distance came in the fourth inning after L’Anse had loaded the bases with one out. Leftfielder Tia Mattila caught a fly ball for a possible sacrifice fly, but her throw to plate cut down the Hornets runner to end the threat.

Madison Pruett doubled and Korey Kaukola singled to spark the Hematites’ fifth-inning rally that continued after a couple of L’Anse errors.

Kaukola finished 2 of 3 with a double and two RBIs, while Pruett was 2 for 2 with two runs scored.

They helped make a winner of freshman pitcher Hailey Hytinen, who went the distance and allowed six hits and five walks while striking out three.

Kailyn Voskuhl took the loss for the Hornets, also going all seven innings while scattering nine hits and three walks as she fanned three.

Berkli Asgaard added a triple and Willow LaChapelle a single for the winners, while Voskuhl cracked two doubles for L’Anse.

Hornets’ teammate Maija Rice was 2 for 4 with a double and RBI as Summer Dudo and Jailyn Shelifoe each singled.

In Game 2, L’Anse led 5-3 after five innings before putting the game out of reach with a nine-run sixth.

“We were OK until things fell apart in the sixth,” McGuire said.

Ishpeming had just gotten back in the game with all its runs in the bottom of the fifth after Pruett, LaChapelle and Kaukola led off with consecutive doubles and were followed by Maija McNab singling.

Josie Rice earned the win on the rubber for L’Anse, going all six innings and giving up six hits and seven walks while K’ing four.

Josie Rice was 2 for 3 with a double and two RBIs, while Dudo had two hits and an RBI and teammate Jaylyn Foy knocked in two runs with just a single.

Pruett paced the Hematites, going 2 for 3 with a double and run, as both LaChapelle and Kaukola had a double, RBI and run.

L’Anse hosts Negaunee at 4 p.m. today, while Ishpeming is off until Thursday when it plays at Westwood, also at 4 p.m.

At Westwood, freshman Natalie Prophet led the way for the Patriots with a big day at the plate that included an inside-the-park home run and a second home run over the fence, both coming in Game 2.

“Natalie went 6 for 7 at the plate across both games and also made some great defensive plays,” Patriots head coach Jared Koski said. “It’s nice to have a freshman on the scene who can give you that kind of game.”

It took awhile for the bats to come alive for Westwood, however. Holding a narrow 6-4 lead in Game 1 going into the seventh, the Patriots strung together five hits and scored five runs to pull away.

Westwood got off to a quicker start in Game 2, putting together a six-run second and adding nine more in the third. The mercy rule went into effect in the fifth.

The Patriots finished with 31 hits.

Junior Karlie Patron took the mound for Westwood in Game 1, allowing just seven hits while striking out 10 and walking two.

In Game 2, sophomore Allie Radcliffe went the distance without allowing a walk and fanning four.

Freshman Jillian Koski also went 5 for 7 at the plate for the Patriots.

At Gwinn, Miners pitchers Abby Nelson and Skylar Hall each twirled three-inning one-hitters in games that ended early due to the mercy rule.

Elizabeth Sterba singled in each game for Gwinn.

Nelson struck out five and walked three in the opener, while Hall had four Ks and no walks in the nightcap.

Katelyn Lammi went big in the first game, going 4 for 4 with eight RBIs after clubbing a grand slam homer in the second inning.

Shaylee Menhennick, who had a double and two RBIs in Game 1, added a three-run homer in the second game. Teammate Payton Drew was 2 for 2 with two RBIs in the nightcap, too.

Brooke Mannor took the pitching loss for the Modeltowners in the opener while Kimber Shelafoe was tagged with an “L” in Game 2.

Gwinn is off until noon Saturday when it plays at Calumet in the West PAC tournament.

At Marquette, top Upper Peninsula pitcher Gabi Salo twirled a five-inning no-hitter in the opener, the only baserunner she allowed was a walk issued to Marquette’s Sofia van den Ende in the fourth.

“Salo is one of the best pitchers in the state,” MSHS coach Paul Seibert said. “She had good command and throws in the mid-60s (mph).”

Van den Ende also knocked in the Redettes’ lone run in the nightcap, singling home Jordan Haynes in the bottom of the first. Each of those players finished the game 2 of 3 as Marquette managed eight hits in six innings off winning hurler Emily Moore.

Amanda McIntire took the loss in the opener, going all five innings while scattering six hits and six walks as she fanned two.

Moore walked none and K’d three for her win in Game 2, defeating Marquette’s Rayna Warchock, who went all six innings and allowed 10 hits and 11 walks while fanning one.

Salo was 2 for 3 to support her effort in Game 1, collecting three RBIs. Lexi Challier was 3 for 5 with a sixth-inning grand slam, a double and five RBIs in the second game.

The Redettes host Rapid River in a 4 p.m. Wednesday doubleheader.