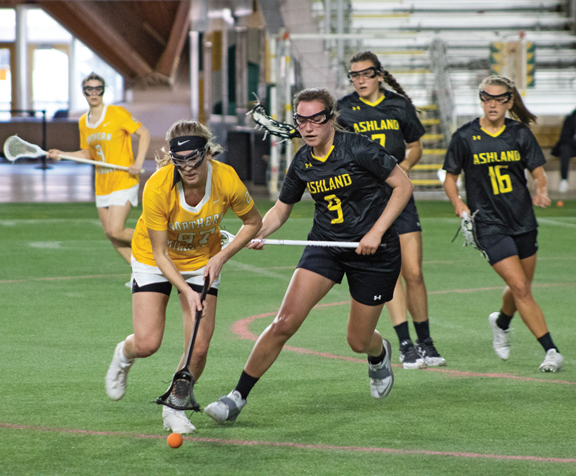 MARQUETTE — The Northern Michigan University women’s lacrosse makes its first-ever appearance in the GLIAC Tournament this afternoon with a 5 p.m. EST game at No. 3 tourney seed McKendree University.

Fans can follow the action using video and live stats. Follow @NMU_Wildcats on Twitter for continuous coverage. Video is available at https://www.glvcsn.com/mckendree/, while live stats can be found at https://mckbearcats.com/sidearmstats/wlax/summary.

The Wildcats secured their postseason berth with a 24-6 victory over Ashland on April 20. NMU jumped out quick with a 15-4 lead and finished by outscoring the Eagles 9-2 in the second half. Northern had a dozen players score a goal in the game. Two days before that, the Wildcats fell 23-0 to No. 12 Indianapolis, which finished the regular season with a perfect record in the league.

The win over Ashland set several records for the young program. The 24 goals were the most in a game for NMU in program history, beating 22 scored over Notre Dame College (Ohio) in its inaugural season. The 18-goal difference was also the largest margin of victory in program history, besting an 18-1 victory over Northland College in 2017.

This season, the team set other program marks by winning their first-ever GLIAC road game, winning multiple GLIAC games as well as making the conference tournament for the first time.

NMU junior Graison Ringlever became the first player in program history to achieve 100 points in her career with the game’s first assist against Concordia St. Paul on April 10. Against Ashland, she became the first player to score 100 goals in her career with her sixth goal of that game. After finishing the game with seven goals, the junior now has 101 goals and 16 assists for 117 career points.

Ringlever’s 40 goals this season are a season high in program history as well.

Freshman goalkeeper Cam Stilson is now 25th in the country with 157 saves this season. Her 10.47 saves per game is 17th nationally. In the GLIAC, she is first in both saves and saves per game. She has also allowed the fewest goals in a season in program history with 58 fewer goals than last year.

This year’s also set a record for season assists with 39, bypassing last year’s mark of 32. Leading the way is sophomore Tess Kostelec, who has set a record with nine. Freshman Emily Renfrew and Ringlever each have seven assists while sophomore Bianca Kinder has six.

Led by Ringlever’s school-record goals and Kostelec’s school-record assists, this year’s team has set a record for goals and points in a season. This year’s squad has 154 goals, topping last year’s 137. This year’s team features four players with 20 or more goals — Renfrew and freshman Jessica Daniels each have 24, while freshman Aleya Speas added 20. Thirteen players have scored a goal.

The Wildcats entering the GLIAC quarterfinals looking to add another program first by defeating McKendree. Earlier in the season, the Bearcats defeated NMU and hold a 4-0 all-time advantage over NMU. McKendree has made the past three GLIAC championship games.