Feeling comfortable in the Dome 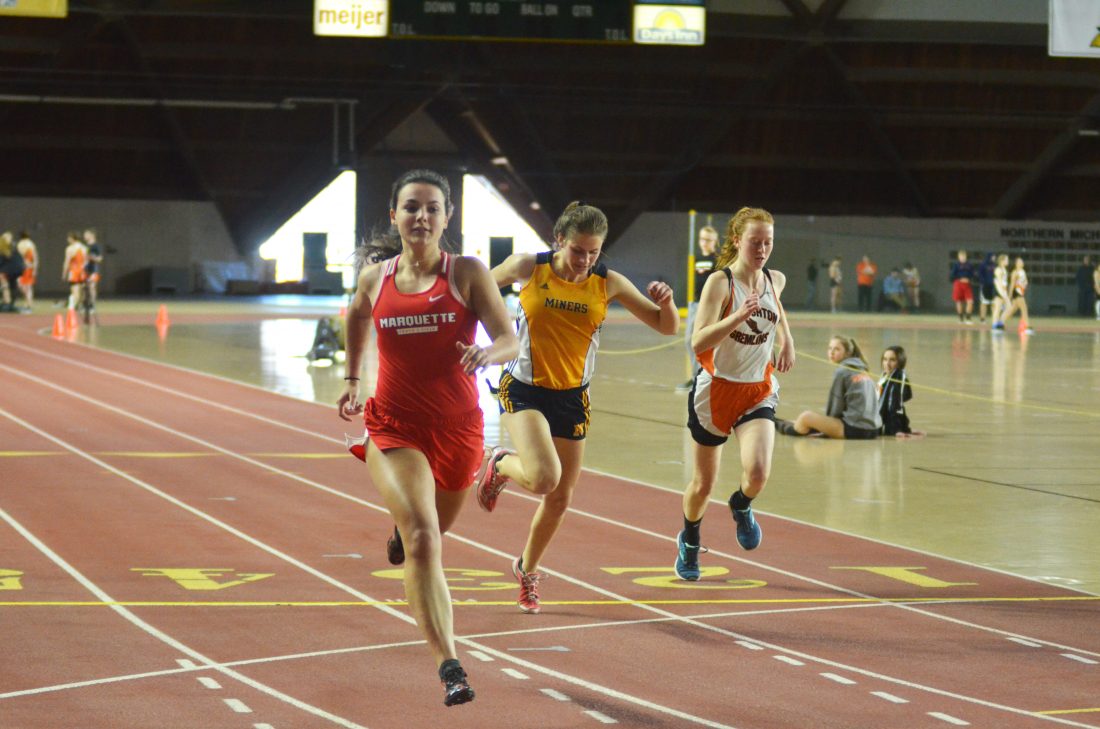 Marquette claimed both team titles, with the Redmen accumulating 127 points and the Redettes earning 120 points.

Following Marquette on the boys side were Westwood with 107, Iron Mountain 54, Negaunee 48, Calumet 47, Houghton 42 and Kingsford 6.

It was the first meet of the season for some teams, while others have already competed two or three times.

For Marquette, it was the second meet of the season after competing at the Northland Pines Invitational two weeks ago, which was also held indoors.

“We never know what the weather is going to be like, so we always try to get these (indoor meets) in,” Redmen head coach Kyle Detmers said. “You have a lot tighter turns indoors, and that’s my one worry because the guys run so hard. It’s a lot of torc on your knees and ankles.”

Marquette girls coach Natalie Messano agreed with the sentiment of being able to compete again, and with the weather finally warming up, her athletes got some outdoor practice as well.

“We were able to practice all last week out on our track,” she said. “It’s nice, especially for my sprinters to get some actual 200’s (meters) in or a 300, versus running in the hallway or the parking lot. They’re getting the feel of being on the track again.”

Raffy Millado also took two of the field events for the Redmen, claiming both the high jump and long jump.

The Redettes won five events, while runner-up Houghton claimed the 1600 run with Anabel Needham putting in a time of 5:36.07. The Gremlins also claimed a wide array of podium finishes.

Ahnika Puskala won the 55-meter hurdle event for Marquette with a time of 9.60 seconds and Clarissa Remillard claiming the 55-dash at 7.84.

Maria Millado also claimed the long jump title with a jump of 15-6.

For the Westwood boys, the Patriots won two field events to go with the 800 relay. Elliot Lemire and Rocco Carlson went 1-2 in the pole vault with Lemire earning a mark of 12-0 and Carlson a mark of 10-6.

Blake Hewitt also won the shot put for the Patriots with a mark of 43-0.

It was the third meet of the season for the Westwood boys, who bring a young and talented roster to the table, according to head coach Scott Syrjala.

“We have a really young team, but we also have some really good seniors,” he said. “Those seniors do a great job leading for us, but we’re still kind of young overall. Being the third meet, it’s still early and we’re still trying to figure a lot out. We haven’t even been on our own track yet.

“You’ve got to look at this as a meet, but as a practice at the same time.”

The Westwood girls earned two victories, coming at the hands of Tessa Leece and Kaitlin Ackland. Leece won the 800 run with a time of 2:40.43, while Ackland claimed the pole vault with a mark of 8-6.

“It’s nice to get on a track and run,” Westwood girls coach Eric Hill said. “It’s nice to be able to give the kids a chance to compete on a track as opposed to hallways or parking lots. I’m proud of our girls. Our distance runners are doing pretty well, our hurdles did pretty well and we’re happy to take places right now. Any time you can finish top six against the bigger schools we’re up against, it’s always a good thing.”

The Negaunee girls won three events with Emily Paupore dominating the 3200 with a time of 11:49.32, beating out Houghton’s Maria Velat by over one minute.

Chloe Norman took the high jump title and also tied a school record with a mark of 5-3, while Leah McCracken was victorious in the shot put for the Miners with a mark of 31-11.50.

The Miners boys took two events, both won by Drew DuShane. He won the 55 dash with a time of 6.81, while Westwood’s Nathan Beckman took second at 6.91. Marquette’s Tanner Judd rounded out the podium.

DuShane also won the 200 dash with a time of 24.23, edging out Marquette’s Raffy Millado and Beckman.

Negaunee boys head coach Kevin Bell said he was happy with his team’s fourth place finish in its opening meet of the season.

“I’m happy with the start,” he said. “You’re in the hallways and gyms and those kinds of things. We’ve been able to get outside and do a few things, but it’s nice to finally do everything on a track and get times on everybody.

“I like our progress so far. We weight-lifted and trained hard early in the spring, and I’m really seeing the benefits from that.”