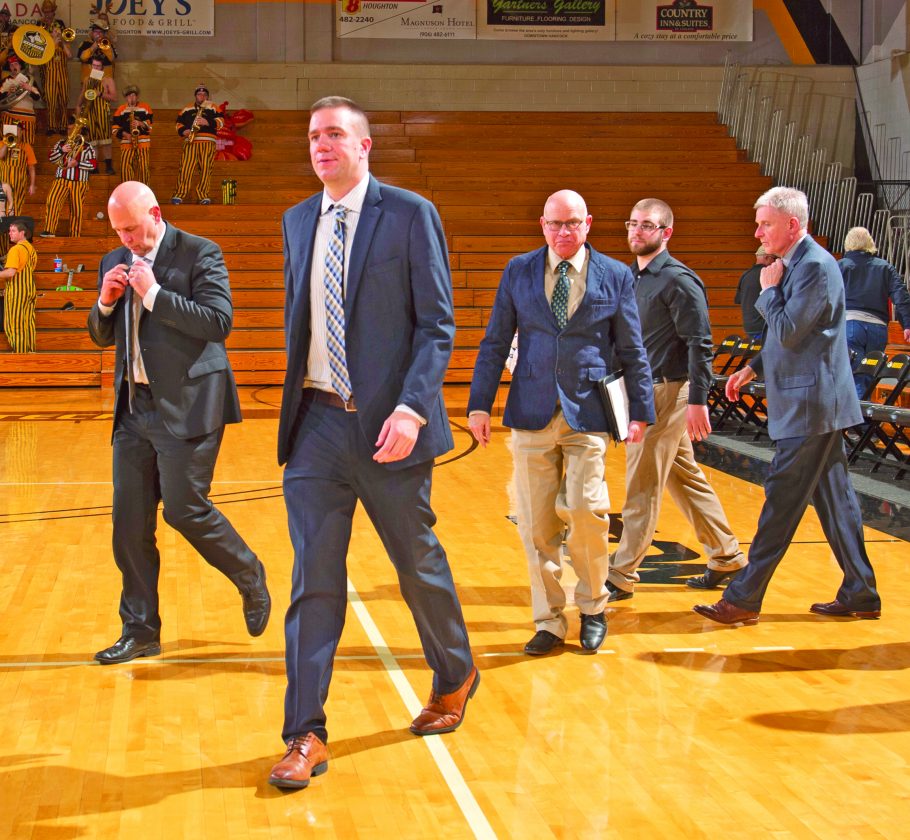 HOUGHTON — It is a Tuesday morning on the second floor of the Student Development Center and Rae Drake is watching television.

His TV is not set to “Good Morning America” or the “Today Show.” It is, instead, the Grand Valley State University vs. Davenport basketball game. He is taking vigorous notes on the opposition.

“Among other things, we look at what our opponent is going to do after a timeout or how do they run their in-bound play,” said Drake, who is in his second stint as an assistant coach with the Michigan Tech men’s basketball team this season. “There is a lot to look for in each game. It is tedious and time-consuming.”

Drake has come a long way from when he first started coaching seventh- and eighth-grade basketball in the early 1980s in Iron Mountain.

“I was a pretty good basketball player in high school (Iron Mountain) and had some offers to play in college but decided to work right out of high school,” he said about his experience at Northern Michigan University, where he graduated in 1980. “I was in construction and the novelty of digging foundations and laying out drywall wore off after about six months. So I went to school and got a degree in special education and have been teaching and coaching ever since.”

After serving as a coach in Iron Mountain from 1982-96, he took his first high school head coaching job in 1996 with the boys team in West Iron County. In nine seasons, he compiled a 121-72 record with the Wykons, including seven conference championships and two district titles.

“We had some very good teams back then,” he said.

After a move to the Hancock School District in the mid-2000s, he worked part-time with the MTU men’s and women’s teams. Then he came to NMU as an assistant to Wildcat women’s coach Troy Mattson in the 2012-13 season.

He became Westwood High School head boys coach in 2014, but had to resign from the position before he had a chance to coach a game due to family issues.

That same year, his father, Rae Drake Sr., died at age 88 after coaching football as an assistant and head coach at NMU in the 1960s and ’70s.

Since then, Drake was able to reconnect with Tech men’s head coach Kevin Luke, who offered him an assistant coaching position.

“I’m grateful to Kevin for that opportunity because it is difficult to get into college coaching if you haven’t played in college,” he said. “There is a reason that Kevin has been around for so long and won more than 400 games. There is a method to his madness.”

As for the play on the court, Drake would characterize Tech basketball as defensive-based.

“We have to stop our opponent first, play tough and limit our turnovers,” he said. “While we have solid players, often times, we do not have a lot of room for error. We cannot be a step late or they walk all over us. We win games when it is a team effort and our defense is stellar.”

That certainly has been the case this year as the Huskies have upset the defending national champions, Ferris State, and a very tough Grand Valley State squad. In both games, multiple players scored in double digits.

Drake is no stranger to the women’s game either, serving as an assistant coach to MTU women’s head coach Kim Cameron in 2010-11.

That year, the Huskies went to the national title game. While they lost to Clayton State, Drake said it was an incredible team, one which will not be forgotten.

“It was surreal,” he said. “That team was so driven, and you had players on that court who wanted to prove to the community that they were good, and they were very good.”

Drake added that Tech is unique in its high standards in academics and athletics.

“The program (here) is not for everyone,” he said. “You have to be good in both and that is what I like about this place. You have some very driven athletes that are great to coach.”

Just prior to rejoining the Tech men’s team, Drake put together the Bay College women’s basketball program and served as their head coach last year. Bay College is a two-year community college in Escanaba.

“My goal in starting the program was to have as many Upper Peninsula girls as we could get. I wanted to get as many fans in the stands as we could get,” he said. “And we did we had some decent crowds and went 14-11.”

He said one of the things that surprised him as a new head coach at that level was the intensity of the game preparation that he and his girls would go through to be ready to play each night.

“I didn’t think it would be that intense and demanding at junior college,” he said.

As he looks back on nearly four decades of coaching, he is grateful for an understanding wife of 30-plus years who has put up with a lot of late nights of him away coaching.

At age 61 and now back at MTU, he has no regrets that he has not reached the head coaching spot at the NCAA men’s or women’s level.

“I have never been one for titles,” he said. “Call me head coach or assistant coach. Either one will work. I’m living a dream as I simply love coaching basketball and working with kids.”