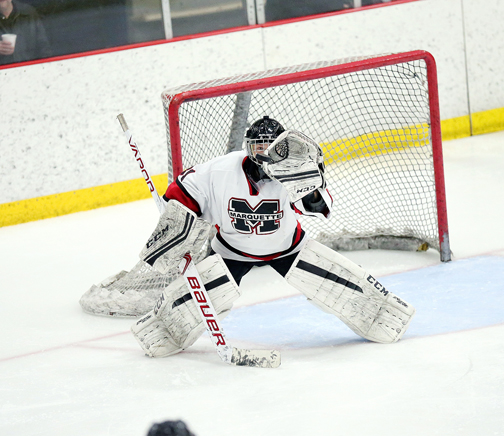 Marquette’s Tyler Bergwall makes a glove save on a quick shot off a faceoff in the Redmen defensive zone during the third period of a high school hockey game played against Hancock at Lakeview Arena in Marquette on Wednesday. (Photo courtesy Daryl T. Jarvinen)

“Confidence…. When you feel good about yourself, you’re playing looser and things are happening and going your way and you’re getting the breaks.” — Doug Garrow, Marquette head coach, on the key to the Redmen unbeaten streak

The Redmen have since been riding a 15-game unbeaten streak and were looking to make it 16 when they faced the Bulldogs again on Wednesday night.

Marquette did exactly that, this time dominating the Bulldogs (7-16) for a 7-0 victory at Lakeview Arena and improving to 17-3-2 on the season.

Asked about any negatives after a dominant performance, MSHS head coach Doug Garrow couldn’t think of many.

“I don’t think there were any negatives,” he said. “I thought we played well, but I thought at times maybe we turned the puck over a little bit too much up the middle of the ice and gave them (Hancock) some opportunities we probably shouldn’t have.”

Garrow credited senior netminder Tyler Bergwall for his shutout performance. Despite only facing 13 shots, Bergwall came up with big saves when they were needed.

“I thought Tyler had a hell of a game,” he said. “He stopped everything we needed him to and it’s nice to get out of here with a win and nobody injured.”

Asked what changed since the first meeting with the Bulldogs, Garrow needed just one word.

“Confidence,” he said. “Our confidence as a team…. Anytime you play with confidence, you’re doing stuff out there that maybe you wouldn’t have done if you were losing.

Later in the period, senior forward Kobie Guidebeck scored right off a faceoff win from teammate Hogan Nemetz on a power play.

MSHS doubled its lead in the second period with two more goals, the first coming from junior forward Gaetanno Cammarata. The play was set up when senior forward Sean O’Connor made a move to the net that was initially saved by Rios, but Cammarata waited on the back door for the easy rebound.

After that, Guidebeck notched another, nearly going the length of the ice on the right side and moving in on Rios to sneak it by him.

Marquette added three more in the third, with Cammarata getting his second of the night on a shorthanded 2-on-1 break.

After the Cammarata goal, a scrum went on behind the Hancock net. With the Bulldogs visibly frustrated, that’s when Garrow hollered to his team to stay out of it.

Garrow commented on discipline being important throughout the unbeaten streak.

“Hancock has had a tough year and they’ve lost quite a few games,” he said. “It’s hard when you’re on a team that’s losing, you just get frustrated and they can drag you into it.

“I didn’t want to have our guys get sucked into that kind of stuff because then we’re playing power play-penalty kill, not everybody gets to play and I just think it’s better for us.”

Guidebeck finished with a three-point night while Cammarata and Fedrizzi had two each.