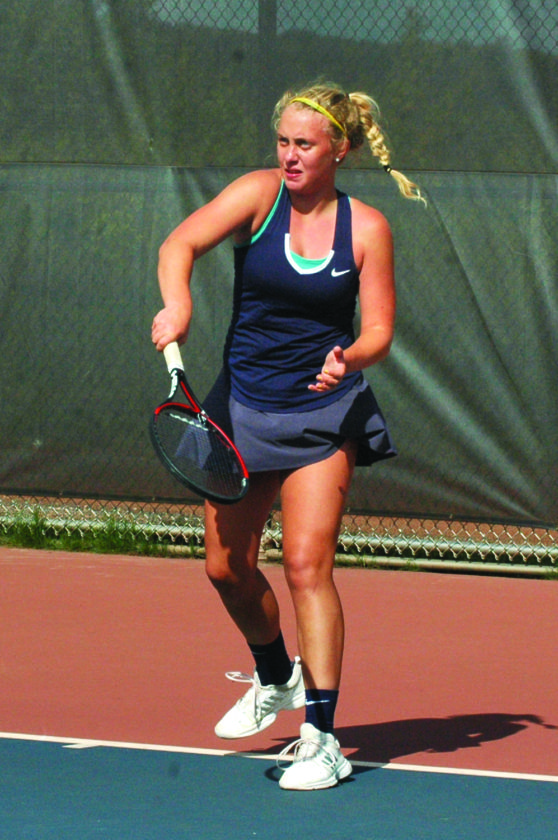 The meet kicked off in the morning with Finals beginning in the early afternoon. Negaunee swept all four singles matches and took three out of four doubles matches to claim the M-PC crown. Westwood also sent four girls to singles finals and had four pairs reach doubles finals, almost setting up what felt like a dual match for NHS head coach Kyle Saari.

“We knew (today) was going to be interesting and that Westwood would be a challenge,” he said. “The finals turned out to be close to a dual meet and each flight did a great job responding in their match. Lexi (Taavola) and Shelby (Yesney) seemed to flip a switch in their second set and never really looked back. Abby (Nelson) was terrific in both matches and fought hard for every point. Jillian (Skewis) also did a great job of pushing through some tough moments to put together a solid third set.

“We’re proud of (today) but still understand we need to play better as we head toward next week.”

“Going into this meet Negaunee had six out of the eight 1-seeds,” he said. “We lost earlier in the season twice to them but there were a lot of close matches. We were optimistic that some of those close matches could turn a little bit. It doesn’t get any better than having a team like Negaunee in your conference to simulate anything that you’re going to get in a U.P. situation. Up to this point they’ve proven that they’re the best team in the U.P., so us being able to stand up to them (today) should be a confidence booster.”

Jackson added that his team is much improved since August.

“I feel like our girls have improved over the season,” he said. “They have a great mindset and they’ll leave it all on the court.”

In the doubles matchups, Iron Mountain took a victory in the No. 1 slot with the team of Saylor Swartout and Claire Mongrain topping Westwood junior duo Karlie Patron and Katelyn Anttila 6-2, 6-1. Negaunee had victories in the remaining three doubles matches with Taavola and Yesney topping Westwood seniors Aubrie Magnuson and Haley Mattila 4-6, 7-5, 6-3 at No. 2, sophmores Morgan Carlson and Katelyn Lammi beating Westwood sophomore Ellie Miller and junior Meghan Johnson 4-6, 6-4, 6-3 at No. 3 and junior Shaylee Menhennick and sophomore Lexi Mason beating Patriots sophomores Jenna Wealton and Claire Gilles at No. 4 6-2, 6-4.

In doubles, the team of junior Berkli Asgaard and senior Willow LaChapelle took a third place finish at No. 2.

Ishpeming head coach Erl Langness said the meet was important to try and better your seeding.

“You’re trying to better your seeding position if possible,” he said. “You’re trying to get yourself at least seeded third or fourth so you’re not playing agains the No. 2 or No. 1 seed right off the bat.”

Earlier in the day, Langness said his team was playing right on pace.

“We’re kind of playing where I expected we would be,” he said.