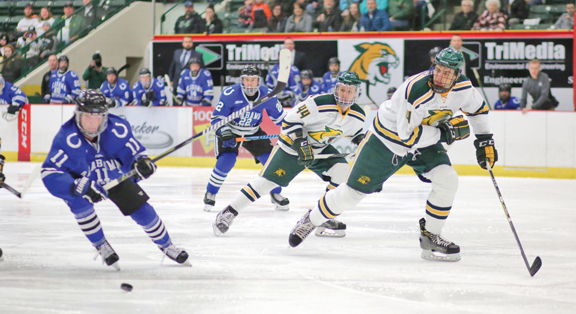 Alabama-Huntsville’s Levi Wunder, left, who is an Escanaba native, skates with the puck while pursued by Northern Michigan University’s Connor Frantti, right, and Ryan Black, second from right, race after the puck in the third period of a WCHA first-round playoff series on March 4 at the Berry Events Center in Marquette. Frantti and Black are among the seniors NMU coach Grant Potulny says he will will rely upon to help bring along the team’s large freshman class. (Journal file photo)

MARQUETTE — The regular season may still be a couple weeks away, but the 2018-19 WCHA college hockey season unofficially began Monday afternoon with the league’s annual media teleconference.

During the extended phone call, coaches around the league as well as WCHA Commissioner Bill Robertson talked about their respective teams and the conference as a whole.

The Wildcats (25-15-3) finished second in the regular season and were one game away from earning their first NCAA Tournament bid since 2010 before falling in the WCHA championship game to rival Michigan Tech. 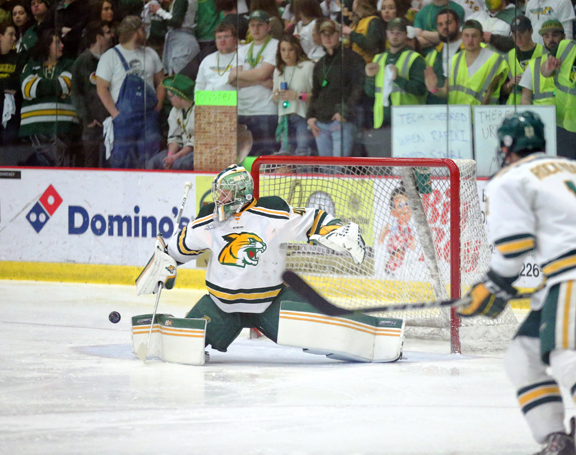 Northern Michigan University’s Atte Tolvanen makes a butterfly save during the second period against a Michigan Tech shot during the WCHA playoff championship game played at the Berry Events Center in Marquette on March 17. (Photo courtesy Daryl T. Jarvinen)

With all that hype, it might be difficult for a coach to keep a talented squad like that focused on the season, but Potulny said that it isn’t.

“They’re a mature group, number one, and I think the biggest thing that you do is that you communicate about it,” he said. “We had this call last year and I think we were picked to finish seventh or eighth and we didn’t have any of those guys on the preseason teams.

“None of that really matters and the same goes for this year. You feel good for the players in that they’re getting recognized for their past accomplishments, but none of that has any bearing going into this season.

“The guys who have received those preseason accolades are competitive hockey players. They push themselves and obviously as coaches you want to work with them and push them, but our leadership group is great. The guys that are on those teams have gone to NHL development camps and those are great honors and are great parts of your career, but you have to prove it every year.

“They don’t hand out awards at the beginning of the year, they hand them out at the end.”

Still, Potulny did acknowledge that he has two rising stars in Rockwood and Loggins, both of whom had breakout seasons and have a connection on the ice that is exciting to watch. Rockwood led the nation in assists and earned a spot on the All-WCHA Second Team, while Loggins made the First Team and led the nation in shorthanded goals.

“They’re the only two guys who played together from the beginning of the year to the end,” Potulny said. “Going into the season last year, those are the two guys that I probably had the most history with, watching Adam from the opposing bench when he was playing for Wisconsin and watching Troy in the USHL.

“Adam is a guy who has elite vision. He’s always looking to make a play and he can kind of make something out of nothing. Troy has an excellent release and he also has the innate ability to find open ice.

“Those two guys, they just have a connection. I think with most times that you have a shooter like that, that’s a left-handed shooter, that you would hope to have a right-handed centerman where he’s looking at him and looking at him to make a play, but because of Adam’s stick skills and his ability to see the rink, he can get pucks to Troy and put it in his wheelhouse where Troy can release it. So the connection there is great.

“I think what’s kind of gone a little bit unnoticed is that those guys kind of took off when Denver (Pierce) came to their line. Denver adds that north-south, heavy, gritty hockey to them.

“It gives them a little bit of room to operate. Denver is a guy who had a very good year last year and we look forward to him continuing to build his offense.”

Potulny didn’t just talk about his stars, though, as he also brought attention to his strong senior corps and how his team has gotten better on both sides of the puck.

“Obviously, I’m excited about our group,” he said. “We return a lot of our offense and our depth has improved. I think that we have some freshmen that are going to come in and compete for some ice.

“There’s been days, like all freshmen, they’ll look like the players you recruited and you get very excited about them, and then there’s days where they look like freshmen. We’ll have to bring them along a little bit, but we’re going to rely heavily on our seniors.

“We have a large senior class and I think if you look at the history of college hockey and teams that have been successful, most of the times, they have seniors and those seniors have great years. That’s going to be very important for our group.

“Our defense is returning the majority of the guys that played. We do have to replace Jordan Klimek, but we brought in Tony Bretzman, who was a graduate transfer from Notre Dame and playing for coach (Jeff) Jackson, he’s been coached and been in a program that’s been successful.

“So he’s going to be bringing a little different of an identity to our blue line back there. He’s going to give us somebody who has played a different system and is maybe a guy who we can bounce some things off of on-and-off coming from a program that I respect so highly.

“Up front, I like where our group is at. We will definitely have much more competition this year. I think at times last year, maybe some guys got some ice because of where our numbers were and maybe not as much as I would like them to earn that ice.

“This year, that’s not the case. Those two groups are improved and having Atte back is obviously a huge piece to our team. With the graduation and transfer of (fellow goalie) Mathias Israelsson, we will have a freshman (Nolan Kent) back there backing (Tolvanen) up.

“Hopefully, Atte can stay healthy and play the majority of the year, but if not, Nolan will go in there and we have full confidence that he’ll do a nice job.

“When we talk about our team, I’m excited about our group. Our depth is there and I think we have some guys at the top of the lineup that can make some plays and generate some offense for us. That being said, I am excited about where our group is.”

One group that is definitely excited about this year’s team is the Marquette community and Potulny said he’s noticed how much the area has embraced the Wildcats.

“As the year kind of grew last year, I feel like we had an opportunity to earn their trust back,” he said. “I hope we did that, and the one thing that I tell all of them is that if you come to the game, I can’t promise you that we’re going to win, but I can promise you that you’re going to be entertained.

“I think entertainment value is something that maybe goes unnoticed in a hockey game, but we’re in the entertainment business. You’re in the business to win games and entertain people. Hopefully, we can continue to have the success that we’ve had at home and continue to keep people leaving the rink happy.

“That’s just a piece (of) it. Our guys have done a great job of being part of the community, whether it’s hosting youth hockey with the pasta party or whether it’s reading to the kids at school or going to birthdays or helping out over at Marquette Junior Hockey or in any way they can.

“We have to keep doing our job of showing the community that we appreciate their support and then we’ve got to play well. Hopefully, we can continue to do those things.

“We’ve gotten to the point where toward the end of the year, every time you come out, you see more and more people in the rink. It was probably like six weekends in a row leading up to the playoffs and it continued to build through that through the playoffs.

“Hopefully, we can see that from the beginning of the year because any athlete, it gives you that extra pop in your step when you come out and the building is full.”

NMU opens its season on the road on Oct. 12-13 at Michigan State, then follows it with another road nonconference series Oct. 19-20 at St. Cloud State before returning home to see if those stands will be full when it hosts Bemidji State Oct. 26-27.

Those are all Friday-Saturday series as will every series be through Thanksgiving. A Tuesday road game at Notre Dame right after the turkey holiday is the only interruption to the Friday-Saturday pairs all season.

Seven of those weekend pairs will be at home, along with two home-and-home series with Michigan Tech in early December and at the end of the season in early March.

Alabama-Huntsville’s Levi Wunder, left, who is an Escanaba native, skates with the puck while pursued by Northern Michigan University’s Connor Frantti, right, and Ryan Black, second from right, race after the puck in the third period of a WCHA first-round playoff series on March 4 at the Berry Events Center in Marquette. Frantti and Black are among the seniors NMU coach Grant Potulny says he will will rely upon to help bring along the team’s large freshman class. (Journal file photo)

Northern Michigan University’s Atte Tolvanen makes a butterfly save during the second period against a Michigan Tech shot during the WCHA playoff championship game played at the Berry Events Center in Marquette on March 17. (Photo courtesy Daryl T. Jarvinen)