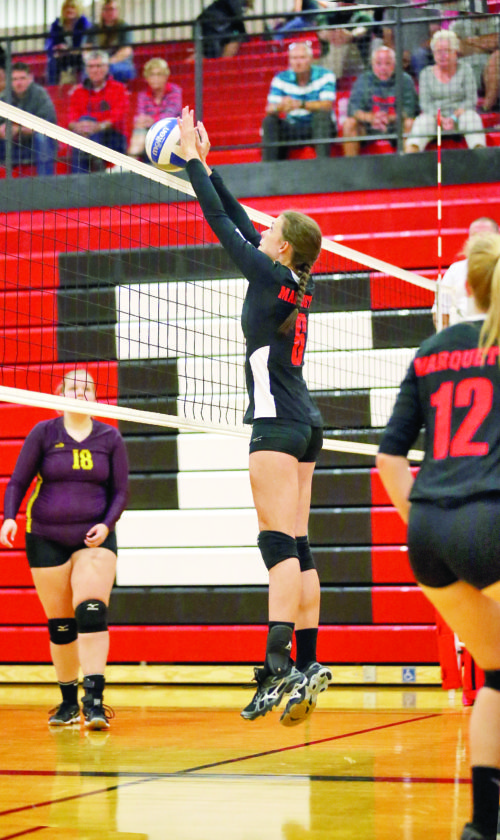 Marquette's Delany Sall blocks at the net during the second set of the Redettes' high school volleyball match against Menominee at the MSHS gym on Tuesday, Aug. 28, 2018. (Photo courtesy Daryl T. Jarvinen)

MARQUETTE — Marquette Senior High School got off to a great start in its Great Northern Conference volleyball campaign on Tuesday night, winning its first league match over visiting Menominee in three sets.

“We took a little time to get our legs in the match,” Marquette head coach Mike Morgan said. “Our serving and defense were very good. It is such a pleasure to have so much balance in the team, which really allows for everyone to contribute. This team has so much potential.”

The Redette JV and freshman team each won their matches 2-1.

“It was an awesome match and overall our girls are continuing to improve,” Munising co-head coach Ann Crandell-Williams said. “It was a hard-fought battle right down to the last point. Manistique played well and we just didn’t come out on top tonight.”

Michaela Werner and Daryn Johnson led the Mustangs’ attack, between them accounting for 37 of the team’s 44 kills as Werner had 19 and Johnson 18.

Werner also had four aces and Johnson two. Teammates Kaila Cotey and Megan Mattson each had two, while Emily Contreras made 35 sets.

Munising is back in action at 7:15 p.m. Tuesday at home against Bark River-Harris, while Manistique doesn’t play again until Tuesday, Sept. 11, in a home match against Gwinn.

“This year we have a young, but very talented varsity team,” Modeltowners coach Toni Roberts said. “We have unfortunately already been bitten by the injury bug but we are moving players into new positions to find our best lineup.”

She mentioned three players out and another two who are just coming back from injury.

Roberts lauded setters Megan Ruoklainen and Marissa Delmont, along with Larissa Wixtrom for her defense.

The Modeltowners return to action at home against L’Anse at 6:45 p.m. Tuesday.