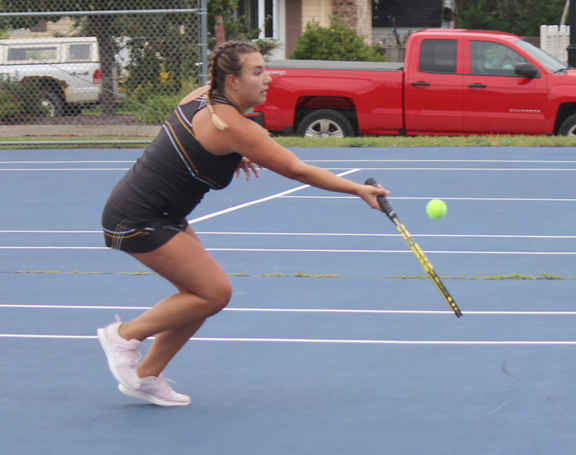 NEGAUNEE — Negaunee showed its dominance on the area high school girls tennis scene by brushing back one of its top opponents, Westwood, without dropping a match on Wednesday.

The Miners improved to 6-0 with the 8-0 blanking of the Patriots, only dropping one set along the way.

“The girls have done a solid job of coming in each day and wanting to prove themselves,” Negaunee coach Kyle Saari said. “They’re not complacent and that’s important because we realize we still have improving to do.”

The only match that went to a third set came at No. 2 doubles, where the Miners’ Lexi Taavola and Shelby Yesney prevailed over the Patriots’ Haley Mattila and Aubrie Magnuson, 6-3, 2-6, 6-2.

Saari noted the performances of No. 3 singles player Jillian Skewis, a 6-1, 6-1 winner over Kaylee Larmour, and No. 2 singles player Maci Aho, a 6-2, 6-2 victor over Tessa Leece.

“Jill is playing with a lot of confidence right now,” her coach said. “Her game has grown the most out of anyone and it’ll be exciting to see that continue.

“Maci moved the ball around well … too and that helped her a lot.”

Both teams are back in action today for their last matches before the holiday weekend, Westwood playing at Ishpeming at 9 a.m. and hosting Ironwood at 11 a.m., while Negaunee travels to Marquette.

At Gladstone, a chilly north wind off Lake Michigan and a light mist made for tough conditions, but the shorthanded Modeltowners managed a win in singles while defaulting two doubles matches.

The Modeltowners came closest to a second win at No. 4 singles, where the Braves’ Abby Rouleau prevailed 6-4, 6-1 over Gwinn’s Megan Brinker.