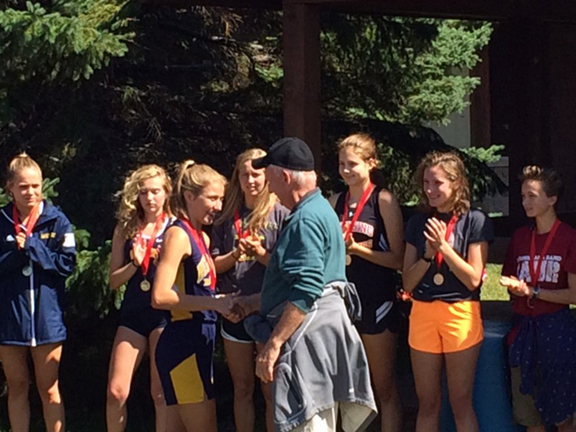 MARQUETTE — All through the week, clouds and rain have lingered over the Upper Peninsula, but on Thursday, the skies cleared and the sun broke through at Presque Isle Park in Marquette, where the Dale Phillips Invitational was held in the late morning.

In the end, it was the Marquette girls and Ishpeming boys who emerged as the brightest teams in the sun, both winning comfortably.

In the girls meet, the Redettes finished with 73 points, while Chassell was second with 99 and Gaylord a close third with 101.

Marquette head coach Kyle Detmers was pleased with his squad and said its deep roster played a role in the victory. He also said right now that the Redettes are focusing on developing a good base before things get a little more intense when the U.P. Finals loom in mid-October.

“Right now, we’re just working a lot on base and not a lot of speed work because we want to peak at the end. We’re off to a good start, but we have to keep in mind that October is what we’re shooting for.”

“I am in cross country mode, but the course was a little long today so that was a little disheartening,” she said about a course that somewhat exceeded the standard 5K of a high school meet. “I was on pace to get a time that I was proud of, but then I crossed the finish line and was like ‘What?’

“It was disheartening right when I finished, but then I found out a bunch of other people said the course was long, too, so it made more sense.

“I’m feeling really good, though. My summer training went super well and I feel really strong. I’m doing a half-marathon this weekend just for a confidence builder and for fun. I just love running long.

“I feel like I’m getting better. I’m more confident every year, which is good and I’m putting more time into training and trying to keep myself healthy; just focusing on the little things that will make me faster and be the best runner I can be at this point in my career.”

In the boys meet, the Hematites finished with 59 points to take the top spot, 12 ahead of runner-up Gaylord, while Marquette finished third with 82. Ishpeming is already off to a great start with two wins in the bag.

“This our third meet (of the season) and this is probably the biggest win of my career with 19 teams and taking first against a downstate team that is a good running team,” Ishpeming head coach P.J. Pruett said. “Never in our history has Ishpeming won this meet, so this is a big win.”

Gladstone’s Adam Bruce easily took first in the individual competition with a time of 17:01.3, while Gaylord’s Andrew Quaal was a distant second in 17:50.7 and Ishpeming teammates Jonah Broberg (17:58.6) and Spencer Giroux (18:04) finished third and fourth, respectively.