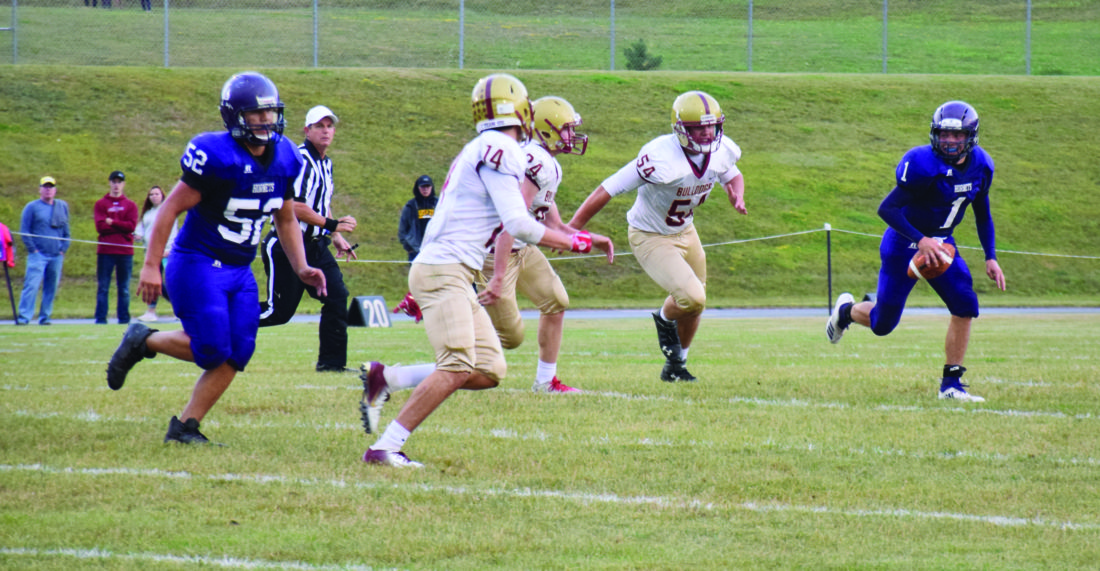 L’ANSE — A better opening night couldn’t come along for the high school football season than the thriller that took place under the lights of Volunteer Field in L’Anse on Friday night.

Visiting Hancock returned home with smiles after the Bulldogs squeaked out a 28-27 victory in the final two minutes over the host Purple Hornets.

“Despite a good effort where our kids played hard, we just had too many mistakes,” he said. “When you lead most of the game and then lose like we did, it is a hard pill to swallow.”

With 2:09 left, the Bulldogs took over on offense at their own 44-yard line. Quarterback Colton Salani led the charge with an 18-yard pass play to move into L’Anse territory. Several runs moved the ball to first-and-goal, and one more run tied the score at 27-27 with 22 seconds remaining. The extra-point kick gave the Bulldogs all the advantage they would need.

“That’s how these kids practice,” Hancock head coach Ted Holmstrom said. “We never stop and nothing is going to prevent us from winning.”

Until those last few minutes, it looked like L’Anse would win as the Hornets led most of the game. At halftime they were ahead 21-7.

Despite that, Hancock opened the scoring with a 4 1/2-minute drive in the first quarter.

The Purple Hornets countered with their own 80-yard drive that included four first downs and some fancy footwork from L’Anse senior quarterback Reese Waara. Running back Jonah Dowd scrambled his way into the end zone avoiding a number of tackles to even the score at 7-7.

The Purple Hornets dominated the second quarter, starting with a Waara interception on a Bulldog short-out pass. He got help again from Dowd, who split the defense with a 13-yard run. Waara then piled his way into the end zone from the 5 to make it 14-7.

The hosts got their third TD before halftime after Hancock turned the ball over on downs. Waara moved L’Anse 65 yards, a big play a pass to Rajala before Rajala also scored the TD.

The Hornets countered an early third-quarter score by the Bulldogs with a 78-yard drive and short TD run by Dowd. But for the first time, their extra point failed on a block of the kick by Hancock’s Evan Larson, making it 27-14.

It quickly became a one-score game when the Bulldogs’ Austin Salani returned the ensuing kickoff 76 yards for a TD and with the extra point, Hancock was within 27-21.

“That got our boys going,” Holmstrom said. “Interestingly it was our normal kick returner, Conner LeClaire, who told me to have Salani take the ball and I listened to him and look where it got us. The kid (LeClaire) made the call.”