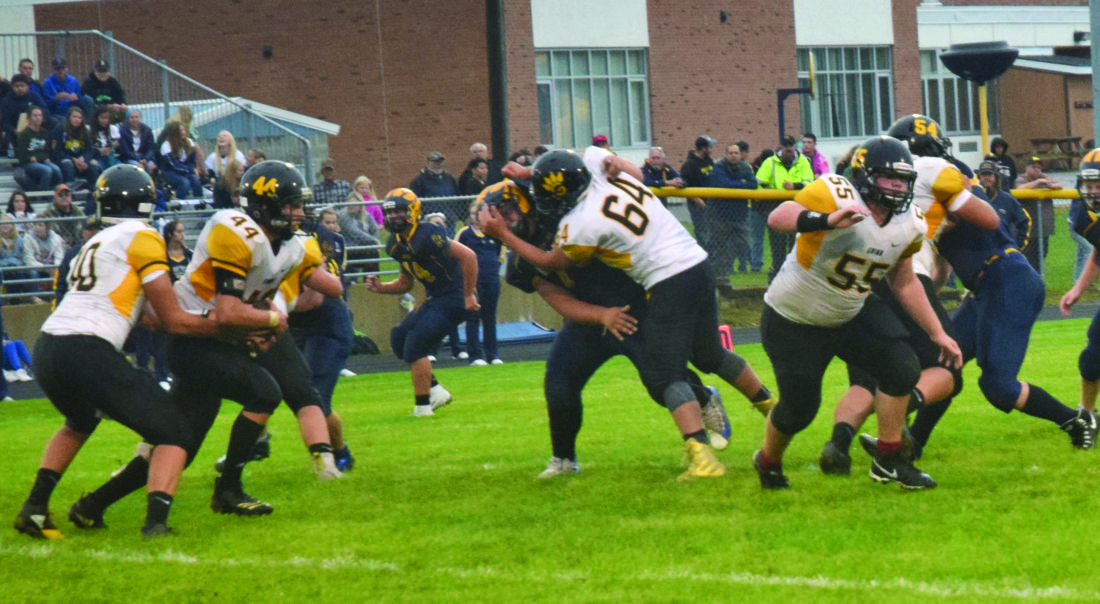 Aho rushed for 235 yards and four touchdowns to lead the Modeltowners and avenge last year’s loss to the Broncos.

“He is a workhorse and a competitor for us,” Gwinn coach Dion Brown said. “Seth has been working hard in the weight room and it showed tonight.

“He can run, he can block, he can catch the ball out of the backfield; he’s the complete package.”

Aho showed his mettle in the fourth quarter after BR-H closed to within a score. Heavy rain at times made no difference to the Gwinn ground attack also keyed by junior quarterback Caleb Anderson.

Broncos running back Aiden Johnson scored on a 10-yard run to cut the margin to eight points, 28-20, early in the fourth quarter.

Then Aho and his offensive line took control of the game with a sustained drive lasting more than five minutes to put the game away.

Aho tallied 70 yards in the 80-yard, eight-play drive — tight end Tucker Taylor had the other 10 yards — capped with a 19-yard Aho burst for a score.

“The tandem of Aho and Taylor is tough to handle,” BR-H coach Al Stenberg said. “They are the two biggest and strongest players out there and when they get the ball you have to tackle low.

“And we didn’t tackle well tonight. Aho tore us up last year and we were fortunate to beat them late in the game. He has great vision, patience and a great burst.”

Gwinn led 20-8 at the half before the rain pelted the teams throughout the second half.

BR-H mounted its comeback with a variety of running backs after the Modeltowners shut down senior Eric Viau, limiting him to 16 yards on nine carries before halftime.

“We are a grinding team and we put together two good drives tonight and our offensive line did a good job,” Stenberg said. “We have to block well up front and they were stacking up on Eric (Viau).”

Gwinn was very happy with the opening-game victory and the combination of a road win and starting the season was a good combination.

“It is always good to win that opening game,” Brown said. “We’ve got lineman that are still out and will be back for us Week 3. We now have a short week and play Manistique Thursday. Getting this first one was a good one.”