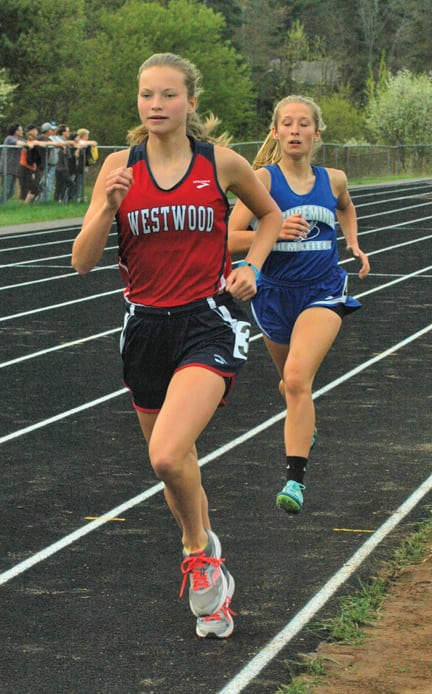 Westwood's Tessa Leece runs ahead of Ishpeming's Kayla Koski for the lead in the girls' 800-meter run during the Mid-Peninsula Conference high school track and field meet held at Gwinn High School on Thursday. Leece won the event and Koski was second. (Journal photo by Steve Brownlee)

Westwood’s Tessa Leece runs ahead of Ishpeming’s Kayla Koski for the lead in the girls’ 800-meter run during the Mid-Peninsula Conference high school track and field meet held at Gwinn High School on Thursday. Leece won the event and Koski was second. (Journal photo by Steve Brownlee)

Negaunee, crowned champion for the ninth consecutive year, doubled up the 81-point total of runner-up as Ishpeming was third with 76.

“I was very happy with our performance,” Negaunee coach Vickie Paupore said. “Our long jump surprised me. We also had one girl (Talon Prusi) go under 6 minutes in the 1,600(-meter run) for the first time and Abbie Tollefson had an excellent showing in discus.”

In a much closer boys meet, the Hematites won with 115 points, followed by Negaunee with 101 and Westwood with 94 1/2.

“We’ve been running strong,” third-year Ishpeming coach P.J. Pruett said. “We made a few changes before the (Upper Peninsula Division 2) regional and they’re working. The guys are focused. They were quiet on the bus coming here. 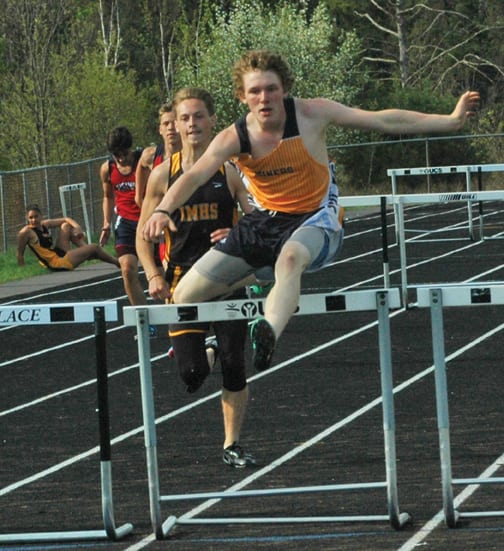 “We went up against three good (U.P. Division) 1 teams and came out on top. This is the biggest victory in my coaching career. We can’t ask to be in a better position going into the U.P. Finals. We weren’t perfect, but got good results.”

“You’re so focused on the (U.P.) Finals, which makes it hard to get up for the M-PCs,” said Emily Paupore, who indicated she was disappointed in her 3,200 time. “We had some hard practices this week. I wanted to run solid races, but didn’t want to burn myself out. I’m trying to keep my head up and stay positive.”

Sophomore Chloe Norman added firsts in the 300 hurdles in 48.31 and long jump at 15 feet, 3 inches, beside helping the winning relay, and Tollefson was runner-up in the discus with a personal-best throw of 102-5.

“Emily and Clara have been steady all year,” Coach Paupore said. “Our seniors have been fantastic leaders and role models all season and Chloe ran a season-best in the 300s.”

Manistique junior Ashley McDonald had every reason to smile after taking pole vault with a personal-best clearance of 9-feet, 1 1/2 feet higher than in the U.P. Division 2 regional at her home track last Friday.

“I held the pole about a foot higher and changed my steps,” said McDonald, who also anchored the winning 1,600 relay (4:29.7). “My confidence had been down since the regional, then I had a real good practice Wednesday and that gave me some confidence coming into today’s meet.”

“We had probably our best handoffs all year in the 800 relay,” she added.

Emeralds’ coach Dylan Jaskolski said he was generally pleased with the team’s effort.

“Today we’re taking our lumps, but the girls are doing OK,” he added. “We had some good performances. Both teams (boys and girls) are running well. We have a good system in place and been getting good results.”

Manistique sophomore Schyler Andersen was runner-up in the shot with a personal-best toss of 41-4 and disc with 114-3.

Senior Darin Johnson provided Gladstone with its lone first in the long jump (20-1 1/4).

“That was a good jump for Darin,” said Braves’ coach Gary Whitmer. “We’ve been hit with the flu bug. We had a lot of guys sick. We had to revamp our relays and hold some kids out of events. I’m glad it happened now and not at the (Division 1) Finals.”

“I wasn’t too worried about time,” he said. “I just ran for place. I ran four races and was a little tired in the end. It was very humid, but our coach (Kevin Bell) said you can’t let the conditions dictate what you do.”