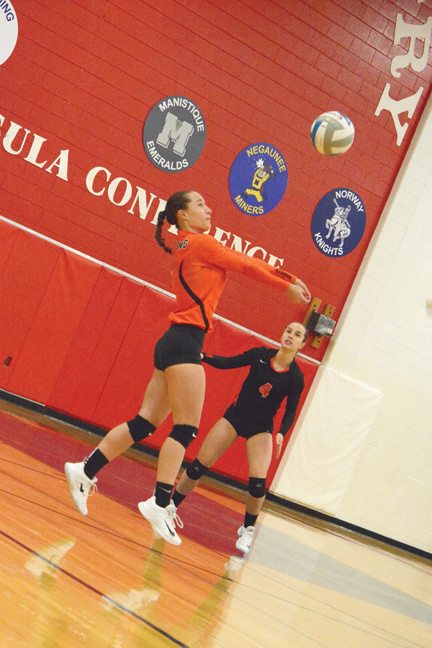 MUNISING — Last week Westwood High School was considered the center of the Upper Peninsula volleyball “universe,” what with the school hosting one MHSAA regional tournament and the Patriots themselves participating in another one.

That universe has moved to Munising this week with the Mustangs and their school involved tonight in the only two remaining high school volleyball games left to be played in the Upper Peninsula this season.

The Munising team travels to Bonifas Gymnasium at Manistique High School to face Rudyard in the Class D quarterfinals at 6 p.m., while the Munising High School gym is hosting a Class C quarterfinal at 7 p.m. between Calumet and Houghton Lake.

Tickets for all ages are $5 per person for each of these matches.

Both combatants in Class D lost a day of preparation when their respective regional championship matches were pushed back a day due to wintry weather on Thursday.

The Mustangs faced adversity for the first time in the regional finals at Westwood, losing the opening two sets to Carney-Nadeau before storming back to win in five.

With a three-set sweep of Lake Linden-Hubbell last Tuesday, Munising has lost just two sets in its five-match tournament run so far.

“We have to stay with what has got us here,” MHS head coach Ted Williams said about making adjustments for Rudyard. “We want to play our own game foremost.

“We’re looking at some things, but basically we have a game plan and it’s worked for us so far.”

A major part of that plan is the star power of senior Kianne Wendt, who has shown in the postseason why she was named Skyline Central Conference Player of the Year.

With an attack percentage approaching .500 during the regular season, Wendt made 19 kills in the short match against the Lakes and 30 kills in the five-setter on Friday.

“Her abilities are going to be tough to fill after this season,” Williams said. “You know it’s something incredibly special when you have a talent like hers.”

His wife and associate coach Ann Crandell-Williams has been a big help as she was a star at Brimley High School and played at Lake Superior State, mainly in the 1990s.

“She’s brought vision, fundamentals and teaching to these girls,” said Ted Williams, who was head volleyball coach at Munising from 1999-2005, stepping down when he took an administrator’s position at the time.

“I’ve been working with these girls since they were in the seventh grade,” he said as he’s been a middle school basketball coach for several years since he returned to the classroom.

Despite his experience, he admitted to being caught up in the moment as the Mustangs were trying to work their way back in the regional finals.

“It was hard enough just to keep myself focused,” Ted Williams said soon after the match was over. “I think I lost it a few times during the (match), but it’s one of those things where your team plays like their coaches.

“I tried to regain my composure and maybe they saw that. We were down in that fourth set and just kept chipping away at it.

“All of a sudden, we found ourselves tied with them. It’s just about staying focused and playing the game and trying to find a spot to put the ball.”

He also credited an end-of-the-regular-season upset at Superior Central as helping in the postseason.

“It got us refocused and they remembered that they can’t just show up to play,” their coach said. “You have to be there every night.”

The winners of tonight’s matches advance to the state semifinals later this week at Kellogg Arena in Battle Creek.

State titles will be decided at Kellogg on Saturday. The Class D state championship match begins at 10 a.m. while Class C follows at noon.