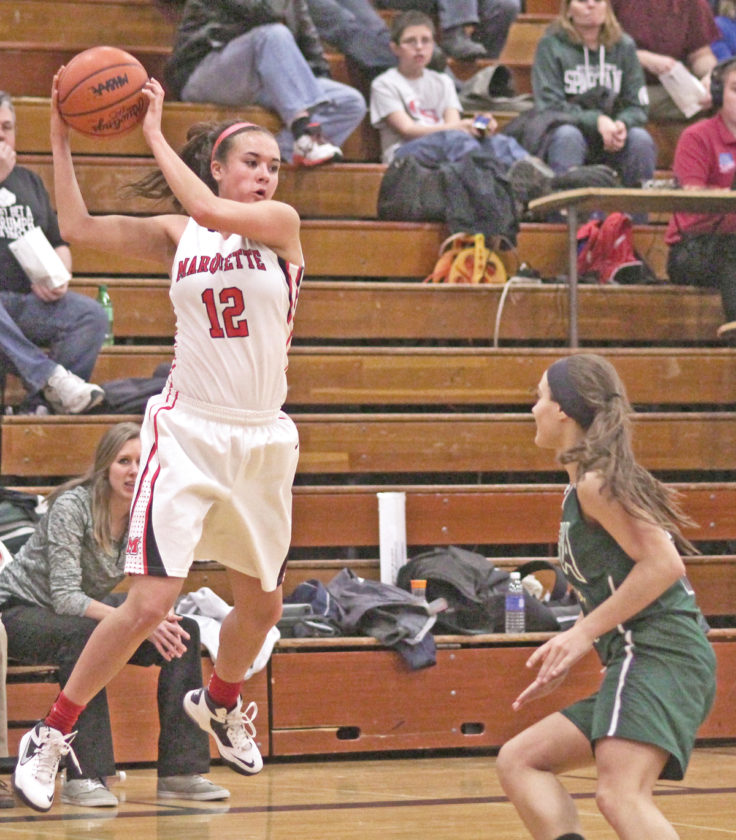 “When it’s not going well on offense, you have to play extra hard and dig in extra deep on defense. — Amber Huebner,

Whether setting up the Marquette girls offense or leading a fast break, Huebner has a look on her face that says she won’t be denied — she rarely is.

On defense, Huebner displays a glare that tells the opposing point guard that she has no chance of getting by her.

Even Redettes head coach Ben Smith made note of that when making the case for Huebner to make the All-Upper Peninsula Dream Team saying that “her defensive intensity, quickness and strength make it hard for whoever she is guarding” and that “with her competitiveness, she is able to affect the game with or without the ball.”

That may be her reputation, but when asked about her intense nature on the court, Huebner laughed and had a hard time describing why she plays like she does.

“I just try really hard and then I get really into it,” she said with a laugh. “When it’s not going well on offense, you have to play extra hard and dig in extra deep on defense to make it carry over, and that’s what I try to do.”

That extra effort helped Huebner become a unanimous choice for the Dream Team as she also got votes for Class ABC Player of the Year.

Her explosiveness with the ball and lock-down demeanor have helped get her attention from college coaches, and a couple of months ago, she announced she’ll be taking her talents to Northern Michigan University.

“Making Dream (Team) has been a goal that I had at the beginning of the season, but I knew that there were a lot of great players in the U.P., especially in the smaller classes, so I’m kind of surprised too,” she said. “I came in as a freshman not really knowing stuff, I mean I played when I was younger, but I feel like I’ve grown a lot since my freshman year.

“The coaches taught me so much and high school basketball is something I’ll always cherish. It’s definitely going to be a lot different in college, but I’m looking forward.”

Huebner started playing hoops with her sister Shayla — who now runs track and field for NMU — and she ended up playing on Shayla’s travel team as a third-grader. She feels that playing up in age with her sister helped her as she moved up to each grade level. She’s also glad that she remained playing guard each year.

“I’ve always been a guard, which is weird because I’m kind of tall for that position,” she said. “I actually was scared that I’d be made a post player in high school, but I’m glad they didn’t.

“I think I’ve always been a guard because in third grade and by high school, there was no possible way that I could play a post.”

Heading into this past season, Huebner became the Redettes’ go-to player after sharpshooter Terese Ledy graduated but said that the pressure to be the sole leader wasn’t too bad. It clearly wasn’t as she led Marquette to a undefeated season in the Great Northern Conference and earning the league title.

When she started looking for colleges, Huebner, who is also a great runner, got her most prestigious offers from NCAA Division I track programs like Western Michigan and Eastern Michigan. However, she decided to stick with basketball and will suit up for the Wildcats this fall, completing a wish she had as a kid.

“Basketball is my first love and even though you can play basketball the rest of your life, you don’t get that game intensity,” she said. “I can run for the rest of my life. Also, my game isn’t at its best yet and I want to see how much better I can get.

“Growing up, I watched Northern play and I really looked up to them and wanted to do that. It’s cool that it gets to become a reality.”

All that determination and intensity has clearly paid off in the end.