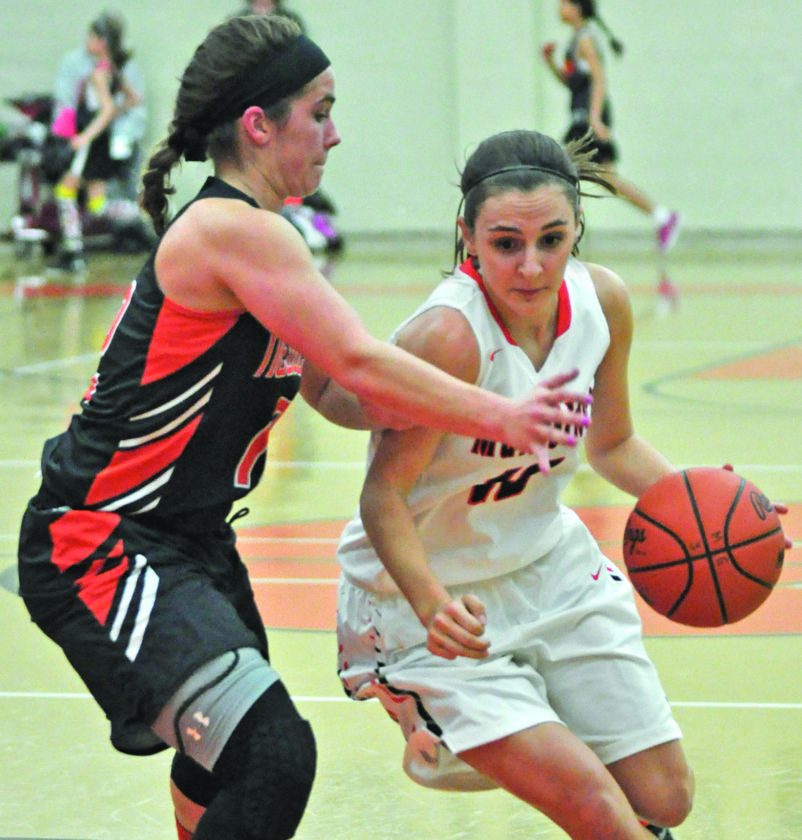 Munising’s Marissa Immel, right, dribbes around her Newberry opponent Taylor Bryant during a game at Munising High School Tuesday evening, Dec. 22, 2015. (Journal photo by Elizabeth Bailey) MARQUETTE — At the end of the Wednesday’s Upper Peninsula Sportswriters and Sportscasters Association meeting, a Miner and a Mustang emerged with a big award.

Negaunee’s Aleda Johnson and Munising’s Marissa Immel each earned spots on the All-U.P. Class A-B-C First Team thanks to some strong performances to close out their senior seasons.

For Johnson, the season wasn’t what she was hoping for. The 5-foot-6 shooting guard suffered a season-ending injury with seven games to go in the regular season that might’ve cost her spot on the Dream Team.

Johnson still had a good year before that, averaging 15.6 points per game, good for second highest in the Mid-Peninsula Conference. She led the M-PC in 3-pointers and in free throw percentage, making 81 percent of the latter. This is her second First Team award and she also was an Associated Press Class C All-State honorable mention as well as a four-time All-M-PC member.

“Aleda is definitely a Dream Team player and is arguably the best player in the U.P.,” Negaunee head coach Brandon Sager said.

While Johnson’s career ended too soon due to injury, Immel’s ended too early in the postseason as the previously undefeated Mustangs lost in the first round of the Class C district in Negaunee.

However, Munising’s success depended heavily on Immel at times, especially when teams focused their defensive efforts on teammate Frankie Mattson. A 5-foot-6 point guard, Immel averaged 13.8 ppg and scored more than 1,000 points in her career. She is a three-time All-Skyline Central Conference first teamer and came through in the clutch down the stretch for the Mustangs.

“Marissa is a four-year starter and she really did everything for us,” Munising head coach Matt Mattson said. “She can score whenever we need it and there were a couple of games later where she stepped up for us.”