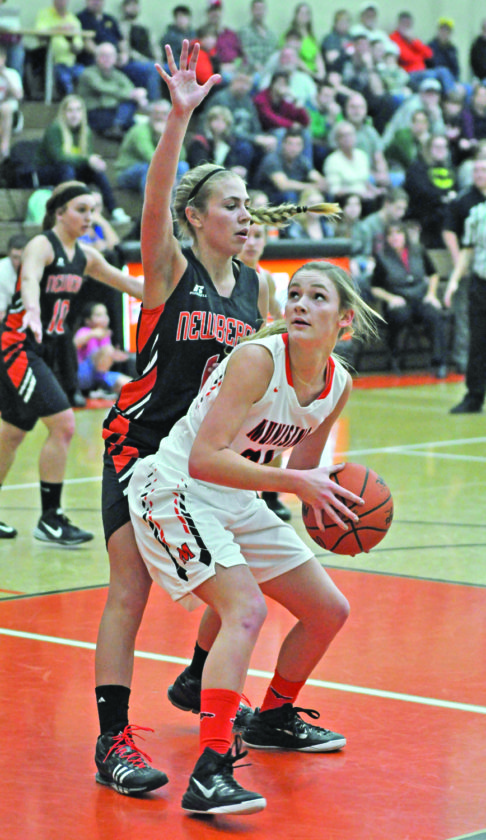 Munisng's Frankie Mattson, right, tries to get a shot in while her Newberry opponent Bridget Stoetzer blocks her during a game at Munising High School Tuesday evening, Dec. 22, 2015. (Journal photo by Elizabeth Bailey)

Marquette’s Amber Huebner, Munising’s Frankie Mattson and Newberry’s Taylor Bryant each earned a spot on the coveted All-U.P. Dream Team with Huebner being a unanimous selection.

After making the All-U.P. First Team last season, Huebner jumped to the most elite of U.P. honors after becoming the Redettes’ go-to player on both ends of the court this year.

“Amber always gives a full effort every time she hits the court and is a tireless worker that everyone in the program looks up to,” Redettes head coach Ben Smith said. “Her defensive intensity, quickness and strength make it hard for whoever she is guarding. With her competitiveness, she is able to affect the game with or without the ball.”

She also earned her fourth straight appearance on the All-Skyline Central Conference First Team and also is a two-time league Player of the Year. She averaged 18.9 ppg in leading the Mustangs to an undefeated SCC title.

“Frankie really does everything well,” Munising head coach Matt Mattson said. “She sees the court really well and she got even better as a senior. She’s had just a fantastic year and career.”

Finally, there’s Bryant, who finishes up her time at Newberry with another big honor. After winning Class D Player of the Year last season, she was edged out this season for the award as the Indians moved up to Class C.

However, she still ended up being a Dreamer once again and is reportedly getting looks from some NCAA Division I programs after earning multiple Class D all-state honors from The Associated Press.

Bryant averaged 19.5 points, 10.5 rebounds and six assists and she set the Indians’ all-time scoring record and recorded numerous triple-doubles and even one quadruple-double in her time with the Indians.