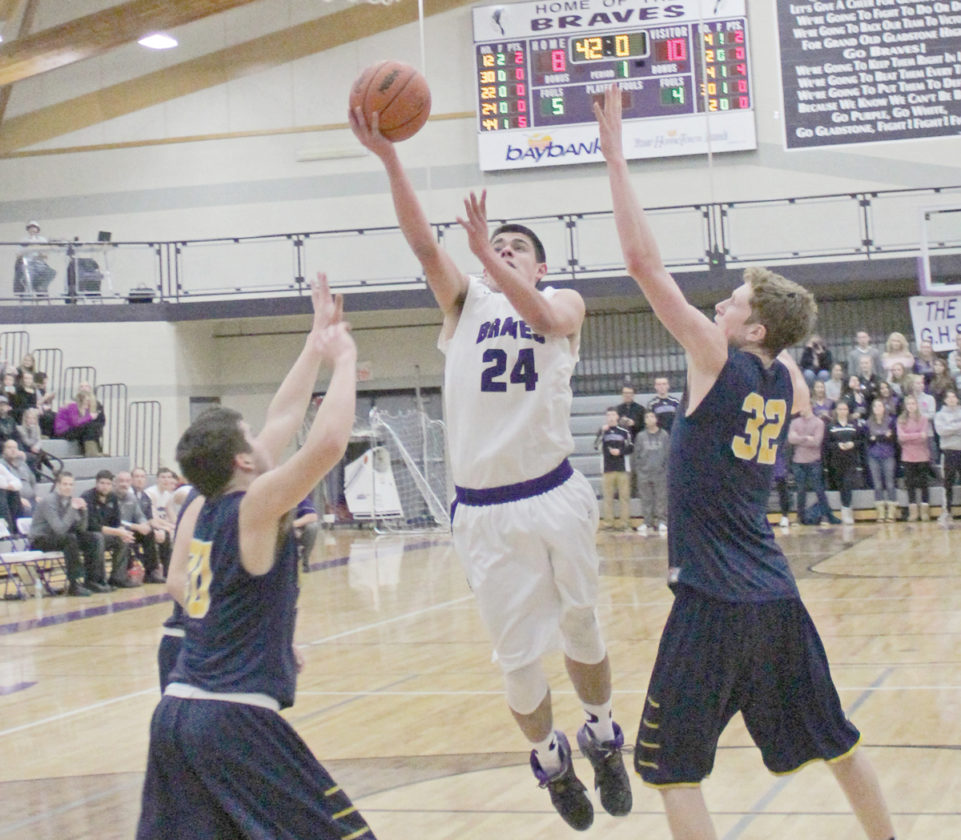 GLADSTONE — If you wanted to see a high-intensity high school boys basketball game with plenty of intrigue, this was the one to attend.

Negaunee needed overtime to overcome Gladstone 75-71 Tuesday night in this nonconference game played at the Braves’ gym. Both teams now stand at 12-3.

“I thought we played great,” Negaunee coach Dan Waterman said. “Our big focus is competing like a champion.

“We figured we had to be tough and play good defense and be disciplined on our offense set. I thought we did a phenomenal job of that.”

Despite the loss, Gladstone coach Clayton Castor was happy with his team’s play.

“I was proud of the way they responded,” Castor said. “I was proud of our kids for battling back. They matched Negaunee’s physicality and intensity.”

The Upper Peninsula’s No. 5 Class ABC team, the Miners came out strong as they opened up the game on a 8-0 run. The No. 4 Braves battled back and tied the score 10-10 by the end of the first quarter.

It was much the same story in the second quarter. Negaunee sprinted out on a 10-2 run to start the quarter before Gladstone battled back to tie it in the final minute. Then Negaunee junior Jacob Ennett made a shot at the buzzer to re-establish the Miners’ lead at 26-24 at halftime.

Yet again, Negaunee came out strong to open the third quarter, but the Braves kicked it into gear to take the lead heading into the fourth quarter, 44-40.

The Miners retook the lead in the final eight minutes of regulation, going ahead by as many as four points heading into the final minute.

A big basket and two free throws by sophomore Reece Castor brought the Braves within two with just under 20 seconds to play.

Junior Brad Spindler drove to the basket and scored the tying basket with five seconds left to send it into overtime.

“That game’s a 50-50 game in the end there in regulation,” Coach Castor said. “I’m really proud of the way our kids hung in there and battled.”

Negaunee hit a 3-pointer early in OT and never looked back. Gladstone had to foul just to try to stay in the game. The Miners shot 13 of 14 from the free-throw line to wrap up their victory.

“I though we showed tremendous poise,” Waterman said. “We were aggressive but patient at the same time. We had a great offensive possession to start that overtime that kind of set the tone for the last three minutes.”

“We knew heading into the season we had two (U.P.) Dream Team players,” Coach Waterman said about Tuominen and Bell. “Dre’ stepped up. He handled the ball, he made clutch free-throws and he pulled (down) rebounds.

“Trent gives us an inside presence. I was just proud of those two seniors.”

Reece Castor led the Braves with 29 points and seven rebounds. Spindler added 22 points and 10 rebounds before fouling out halfway through OT.

“We really believe that we have two of the best players in the U.P.,” Coach Castor said. “We wanted to come out tonight and showcase that and I thought Brad and Reece did that.”