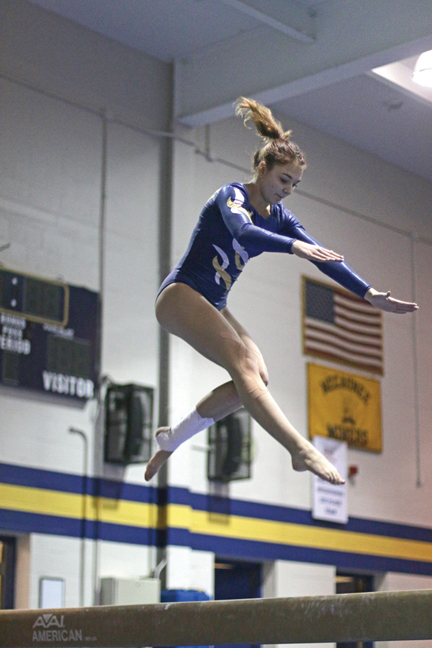 Miners head coach Eyre Becker said she was proud of her team’s rebound from a loss last Friday to the Superior team based out of Lake Linden-Hubbell.

“Tonight was a nice vindication after last week,” Becker said. “We had some tuneups and made some changes, and our scores indicated that we’re … improving each week.”

Negaunee was led by team captain Kelsi Cox, who placed first in both the balance beam (8.3) and the floor exercise (8.35), helping earn a winning all-around score of 30.85.

Becker said Cox continued to prove why she is the team’s senior leader.

“She leads by example, which is a beautiful and rare quality with high school students,” Becker said. “She brings team spirit to every meet, and is always working hard in the gym, not just on herself but also helping improve everyone else as well.”

The Miners had the top four all-around scores, the first three separated by less than a point.

May Waters came in second with at 30.70 while finishing atop vaulting with a 8.35 score, while Kylar Kallioinen finished third all-around with 30.65.

Skylar Taavola was fourth with 28.55 all-around score, while teammate Lexi Caya topped the bars with a 7.5 score.

“Our team has nice depth, with strong athletes from freshmen on up,” Becker said.

Kiah Staley led Marquette with a 28.35 all-around, good for fifth, and had her best performance on the balance beam with a 7.7 to take second.

With Staley as the Redettes’ only senior, Marquette head coach Kris Lakenen said she is looked up to by her teammates.

“Staley’s really stepped up her game and into her role this year,” Lakenen said. “She’s coming out to be an amazing gymnast. She’s showing good leadership in the gym and it’s carrying (over) into her routine, and her confidence is there.”

Marquette’s depth has taken a hit this season with just five girls able to compete Thursday. Lakenen said her team is fighting through the adversity.

“We’ve hit a couple rough spots with injuries and have lost some girls,” Lakenen said. “Despite the small roster, the girls are competing and putting in amazing efforts while overcoming a lot of obstacles.”

The young Marquette team has six more meets to qualify for districts, with the next one at home on Jan. 26 against Superior 7.

“We need to move forward,” Lakenen said. “Our girls need to get healthy. Hopefully we can get some confidence to our younger gymnasts and help them learn the sport. We have a real positive group of girls, and they’re coming together to make a great team.”

For the Miners, the chance for redemption will be on the line when they get a second crack at Lake Linden-Hubbell, this time in the Negaunee gym at 6 p.m. Tuesday.

“We want to continue our momentum,” Becker said. “We want to prove how capable we are, and we’re hoping these girls stay hungry and are ready for the challenge.”