GWINN — Gwinn earned its second girls basketball victory in a row Monday night, a 62-43 victory over Manistique keyed by a third-quarter surge.

The Modeltowners, who opened the season with 12 straight losses, held a modest 25-18 lead at halftime before dropping in 22 points during the third quarter to put it out of reach.

Brooke Mannor and Kia Evans each scored 12 points for Gwinn, while teammate Tierra Taylor tacked on 10.

“Our inability to make shots has been hampering us,” Olsen said. “We turned it around tonight and made a ton of shots.

“Early on, Manistique had more energy than us, even though we had a halftime lead. I challenged the girls to be more aggressive and get after the ball more, and that was the difference maker for us.”

At Ishpeming, the Hematites had balanced scoring with four players reaching double figures in their Mid-Peninsula Conference victory.

Ishpeming led 26-18 at halftime, tacking on 22 more in the third quarter.

“The game started off a bit slow, but we were able to kick it into gear in the third quarter,” Ishpeming coach Ryan Reichel said. “Any night you get four girls in double figures, you have a good chance to win.”

At Felch, the host Nordics picked up their first win since mid-December to improve to 3-10 overall and 2-5 in the Skyline Central Conference.

“Pretty excited about it, we had a great team effort,” ND coach Rick Faust said. “We had struggled throughout the year with a lot of tougher teams.”

At Republic, the Hawks were unable to keep a lead they built in the first quarter as Ontonagon held a 36-18 scoring edge in the middle two quarters combined.

“The girls worked really well together and just struggled after halftime,” Radcliffe said. “Ontonagon had a good press that we couldn’t break with all of the pressure. We had sloppy passing, and they attacked our outside shooters.”

At Baraga, the Vikings had a comfortable 11-point lead after three quarters before Chassell cut the lead to just one, 41-40, with about two minutes left.

Then Baraga’s Carsyn Osterman got into the act despite her scoring just five points in the first three quarters. The senior made a 3-pointer from the top of the key with 1:54 remaining to propel the Vikings.

“They are going to be (difficult) in the districts,” he said. “They are still going to win a lot more games this year.”

It was a big night for Baraga junior Chelsea Pittsley. Starting the year on the JV, Pittsley had her biggest scoring game, netting 11 points through the first three quarters on the strength of three 3s.

“We had a game plan with Chelsea and it could not have worked out any better,” Willis said. “She had her best game of the year.”

Osterman and the Vikings (11-2, 8-1) ran a patient offense in the game’s final two minutes to hold off the Panthers.

Baraga goes to Jeffers on Thursday.

At Houghton, the Purple Hornets (5-7, 0-3 West PAC) couldn’t keep up in a high-scoring game despite Bailey Froberg putting up a game-high 24 points.

“We had a lot of trouble with Bailey Froberg. She had a nice offensive game, and L’Anse played hard.” 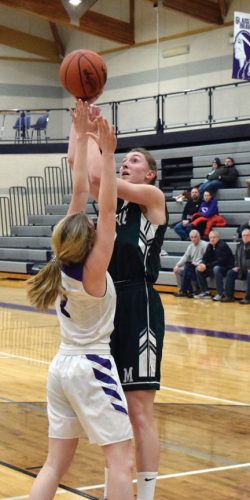