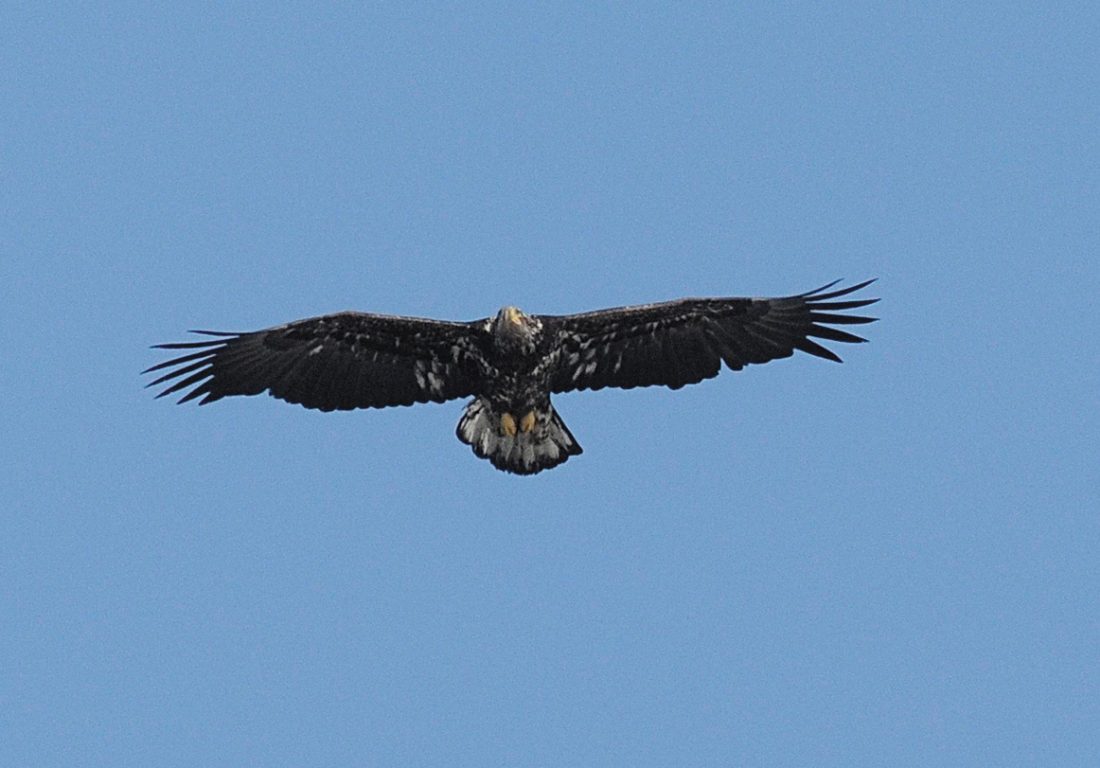 “They were relentless, brilliant scavengers with a keen sense of craftiness, and no human being could outwit them. The kind of cunning mischief and competition that a murder of crows possessed was unbeatable…”

The sound of a murder of crows, a flock of blue jays or a few cranky ravens punctuating a fall sky with their deep “croaks” usually means things are getting interesting. Social birds with a great deal of intelligence, the corvids, the jays, crows and ravens are great sentinels for predators in their territories.

When blue jays and crows discover an animal like a fox or owl, they immediately send out an alarm in the form of loud, rushed caws or screams. The loud, anxious calls summon other corvids, with jays and crows coming to the calls of each other. Robins, nuthatches, chickadees and other small birds may also join in the congregation. Bird rehabilitators downstate reported receiving a northern saw-whet owl with eye injuries received from nuthatches while it was in a daytime perch so no owls are safe.

While most birds will perch near the predators, crows will dive bomb the target, making their U-shaped dips a good indicator there is an interesting animal below. Thirty crows in the tops of several large trees all calling loudly and circling can be a good bet there is an owl, or even an eagle present. A group moving slowly through an area may be following a fox, or cat — wild or domestic.

Last Sunday a small group of common ravens were calling out in their loud “croak,” alarm over an open are near the Gratiot River in Keweenaw County. A scan of the skies revealed they were circling around an adult bald eagle about 200 feet up. When owls are harassed, leaving a protected perch opens them to brushes with the diving birds, but many still leave to find some respite from the chatter and the dive bombers. A long-eared owl on the east side of Marquette several years ago spiraled upwards nearly 500 feet to escape a quartet of crows and headed out over Lake Superior until the crows peeled off. The owl then circled back into town following the shoreline toward the downtown area.

Blue jays can be equally aggressive. A clamor of them in an oak woods in Illinois once really surprised the birders hoping to see an owl. There was a great horned owl being scolded by nearly 39 blue jays, but the situation was a little different than expected. The owl had died but the reflexive action in its feet that allows it to hold onto a branch when it sleeps was still in effect, and although the owl had slid off its perch, it was hanging upside own in the tree. That did not matter to the blue jays who on discovering the owl proceeded call loudly at it for nearly half an hour.

This fall both crows and blue jays seem plentiful. Both are susceptible to West Nile virus, a disease having an impact on them in recent years. This summer there have been no reported cases in humans of the virus in either Michigan or. Wisconsin, so it appears the incidence in the region is relatively low. Hearing a loud chorus of either this fall could lead to an owl, hawk or eagle sighting!

Sandhill cranes have been staging for several weeks in anticipation of their departure for Indiana and other points south. Staging is the term used to describe their practice of congregating in evenings after forage across open fields nearby during the days. The Arnheim Sloughs along the southern Houghton County border have seen some groups of over 100 already. Historic U.P. staging areas include the fields south of Chatham and open areas near Fibre in Mackinac County in the eastern U.P. where flocks of over 400 have gathered. There have not been any reports of large groups of cranes though and the beginning of the small game hunting season Sept. 15 usually marks the departure of most cranes from the area.

Hummingbirds are joining the shorebirds and warblers currently leaving the area. A few birders report seeing young, and a few females at their feeders and one birders in northern Marquette County reported six ruby-throats at feeders last Tuesday.

At Whitefish Point in Chippewa County dabbling ducks have begun to show up along the shore flying south. Not too many grebes, ducks or loons stop at the point during fall migration, usually using the following north winds to ease job of making the long flight south. American wigeon, northern pintails and teals have begun that segment of migration this week.

Also seen at the point were the starts of the movements of American pipits and lapland longspurs, a sure sign that migration is on the back side as we zoom through September. Flocks of horned larks and snow buntings, will start the last big wave of northern songbirds heading south. Stragglers, diver ducks and the start of the winter finches and snowy owls will come. Ron Pittaway’s 2019-2020 Winter Finch Report should be out in a few weeks to provide some insight on fall and winter birds.

In the meantime, the fall color pageant is beginning. The bright yellow of roadside goldenrods is being replaced with the gold of bracken ferns. About 10% of the trees in the Copper Country have turned, mostly classic, bright crimsons, and the Champion Highlands are about 20% It is getting pretty exciting!