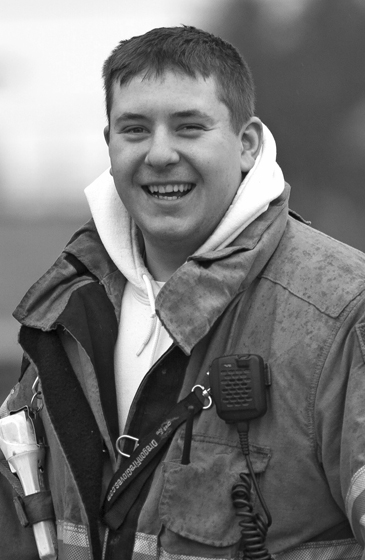 GWINN, MI – Ben (Benjamen) Lauren, 23, of Gwinn, a member of the Forsyth Township Fire Department, was fatally injured while fighting a structure fire.

Ben is the son of Ronald and Carla Lauren, also of Gwinn. Ben was a 2014 graduate of Gwinn High School and a 2018 graduate of Northern Michigan University, receiving a Bachelor’s of Mechanical Engineering Technology degree. Ben was strong in his Christian faith with his favorite verse being John 3:16 (“Look it up.”)

Ben was a get-the-job done kind of guy. As a small boy, he began doing the chores, farm kids do. He loved haying season, where a day filled with work and laughter with cousins and family, was then turned into star-filled evenings of joyful chatter under the maple tree of the Carlson Family Farm in Cornell. Ben loved to laugh and goof around but working was his play. At age 14, while other kids were enjoying summer vacation, Ben joined his second family, The Bruce’s, on a trip to Rockford, Illinois, for a week of early mornings and long days detasseling corn to earn money for college. At age 16, Ben was offered a job at Tractor Supply Company based solely on his witnessed character as a customer. At age 18, he took a job as a laborer for his young-boy-hero, Mike Wills, with Mike Wills Excavating and made many great friends while working and living with the crew for the summer in Marshall, MI. He returned home to begin his studies at NMU and worked for MJ Vandamme as a garage/farm laborer. He made some of his best memories working side-by-side in the field or the garage with his life-long friend Mason Bruce. During his final year at NMU, Ben worked as an intern with Miron Construction of Appleton, WI, and was offered a full-time position. This was a hard time for Ben as he knew he never wanted to leave “Gwinn-town”. He was certain he would live in Gwinn and remain a member of the FTFD and prayed for a career opportunity closer to home. It was with immense joy that he was offered a job as a Maintenance Planner with Verso Paper of Escanaba. At his interview, he said, “Hire me, and I will work harder than any other man you choose.” He was determined to learn, succeed, and enjoy each day.

Growing up, Ben spent his free time playing with his siblings, riding four wheelers with friends and cousins, shooting squirrels, and hunting deer and partridge with his Dad, uncles, and grandpas. Ben could always be found glued to his Daddy learning auto mechanics, building things, and doing chores far beyond his age expectations.

Ben was involved in the Busy Bees 4-H club from age 8-19 where he trained, showed, and sold hogs and steers while learning a strong work ethic and personal interaction with adults while earning money for college. Ben loved the Detroit Tigers and played catch with anyone who would participate. Ben and his Dad lived and breathed NASCAR all summer, saving Sundays for race day. He was an avid Dale Earnhardt fan and then followed Dale Jr. As a youngster, Ben would always be found wearing his #8 hat which later became the same number on his fire helmet.

His interests were plentiful but his premiere fascination was the fire department. He and his siblings were often “on-scene” in their car seats as little babes. He enjoyed the big trucks and the flashing lights. Ben’s fascination became determination, and he joined the fire department as a cadet at age 14. He certified as a firefighter at age 18. In 2018, he received the Forsyth Township Fireman of the Year award. Ben worked ruthlessly to create and build camaraderie and to bring the fire department back to “what it used to be”. When the fire pager toned, he hastily raced to get to the hall, saying, “I was born for this!” He always wanted to “make the first truck” in his response.

Ben was his own entertainer and laughed the hardest at his own “Dad” jokes. He was a lover of country music and used music and songs to reveal his heart. Every song had a message that he would use to share himself with others. He was a teaser, a joker, and a loyal friend. He was a go-getter and held a presence well beyond his young years. He had a contagious warm smile that drew babies to his arms and respect from his elders. He had a tremendous positive impact with everyone he interacted with.

He was preceded in death by his aunt, Molly Broeders.

Ben’s “rental” parents were his beloved daycare mom, Marla Jensen of Gwinn, Aunt Sue, and Hope Bruce of Arnold. His “rental” grandparents, dear to his heart, were Ronald and Lenore LaForest of Gwinn.

Lastly, but first on his list, is his girlfriend, best friend of three years, and soon-to-be fiance, Ms. Sierra Schiller of Gwinn. He spoke of proposing to her on October 4th, so when she said “yes” he would have his special response of “10-4, good buddy” infusing their life with humor. The two of them had already made many memories and had uncountable plans and dreams that were cut far too short.

Due to the Covid 19 virus, a private service officiated by Bill Hill will be held at the Canale-Gwinn Funeral Home on Saturday, March 21, 2020, followed by a final drive to the Forsyth Township Fire Hall.

Further burial and honorable processional activities will welcome Ben’s extended family, friends, and the entire community with a tentative date of May 23, 2020.

In lieu of flowers, an account is set up at Honor Credit Union to be used to create a foundation in Ben’s memory. Memorial tributes can be shared on the Honoring Ben Lauren Facebook page.

Ben’s obituary may also be viewed at canalefuneral.com where memories may be shared.