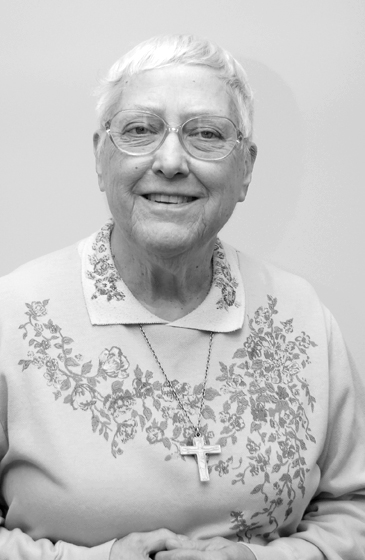 MARQUETTE, MI – Regis Mary Walling (baptized, Mary Lou Walling), age 86, of Chocolay Township, joined the “Great Cloud of Witnesses” on Thursday, February 6, 2020, at Trillium House, Marquette. She had been a hospice care resident there for just over one week, in the loving care of the Trillium staff and volunteers, and the caregivers of UP Home Health and Hospice, as well as family and friends.

Born May 24, 1933, she became the adopted and much beloved daughter of her parents, Helen (Paddock) Walling and Philip Joseph Walling of Detroit, Michigan. She was educated at Precious Blood Grade School (Detroit), St. Mary’s Academy (Monroe), and Marygrove College (Detroit). She entered the Immaculate Heart of Mary (IHM) order as a novice and took her final vows as Sr. Regis Walling, IHM, as a teaching sister. She also earned a Master of Arts degree in history from Loyola University in Chicago and a Master of Arts degree in theology from St. John’s Provincial Seminary in Plymouth, MI.

Over the nineteen years of her teaching career, she taught at many grade levels, from 4th grade through college. Serving in several schools, including Holy Redeemer (Detroit), St. Joseph (Dexter), Christ the King (Detroit), Westchester High School (Chicago), Sacred Heart (Dearborn), St. Ignatius (Oregon, Ohio), and her alma mater, St. Mary’s Academy, she focused on history and Latin at the higher academic levels.

This past Christmas, as for many years, she received a gift from the only student she ever “flunked” – a young man who thanked her for doing so because it woke him up to his need to grow up and take responsibility for his life. A former young woman student, who also remains in touch, became a history teacher because of Regis.

Following a sabbatical, Regis discerned a spiritual calling for ministry to the unborn and their families. Though the decision was not easy, she left the IHM order after twenty-nine years (though continuing to live the spiritual life of the order) to devote herself to establishing care facilities for expectant mothers struggling with unwanted pregnancies. She was known for her work as founder, coordinator, and director of Pregnancy Services of Michigan, which included the Upper Peninsula, through which she saw to the organizing of Pregnancy Services organizations in every county in Michigan. These provide spiritual, emotional, material, nutritional, and educational support, as well as pregnancy testing, prenatal care, and adoption assistance as needed, to help these mothers choose life rather than abortion for their unborn babies. To further this ministry she authored the book When Pregnancy is a Problem in 1980. This ministry brought her to the Upper Peninsula in 1980, where she established what was originally Pregnancy Services in Marquette and is now the Care Clinic.

Regis served the Diocese of Marquette in many capacities. She served on steering committees for a Diocesan Staff Day of Prayer and for a monthly support group for divorced, separated and remarried Catholics, and made presentations at clergy conferences and workshops around the diocese.

In 1981, Regis Walling was recruited by Bishop Mark Schmitt to assist in establishing the Family Life Office for the Diocese of Marquette. This office coordinated diocesan efforts for Respect Life, Natural Family Planning, Legislative Affairs, Health Affairs, Family Life Programs, a Native American Apostolate, Refugee Resettlement Programs and the Campaign for Human Development. Regis worked with local, state and national level organizations that contributed resources and information to support families. Regis had a strong desire to assist families in being strong, independent and engaged in their faith.

Also, beginning May 15, 1981, Regis began writing a regular Family Life Office column for the U.P. Catholic newspaper, a week after starting her new job there. She also contributed to that paper for many years under the byline “Reflections from Northstar,” offering insights on faithful living and helping to educate Catholics on ways to incorporate holiness into their everyday lives. Her deep and compassionate faith glowed as brightly as her smile in everything she wrote.

Regis also served the Bishop Baraga Association in many capacities. She helped to edit and annotate The Diary of Bishop Frederic Baraga (which was translated by Joseph Gregorich and Rev. Paul Prud’homme, S.J.). She also worked to educate people on the ministry and heroic virtues of Bishop Baraga through the Association and the Cause for Sainthood.

In recent years, she served as Librarian at St. Louis the King, and was a source of support and an example of living her faith, to include attending daily Mass until her health issues intruded. Even in the last few years when she was ill, she always had kind words of support and encouragement for those around her.

The story of her life would not be complete without mention of her love of cats. She always had at least one, often two, and cat memorabilia can be found all over her home.

She was also an avid reader until the last month of her life, and so was often found with kitty, Cleo, on her lap and a book or magazine in her hands.

Regis Walling counted among special friends her physician of thirty years, Dr. Michael Grossman, who also attended her in her final days. He especially appreciated all her good book recommendations and her spirituality. She also shared a special bond with Lutheran pastor, and Director of the Cedar Tree Institute, the Rev. Jon Magnuson, whose article on Father Marquette, written several years ago for the Marquette Monthly, was shaped by a conversation about faith and life he had with Regis in her living room.

Regis loved conversing with others about the intersection of scripture and daily life and so was for many years a regular and much-loved member of the mostly-Lutheran ecumenical Tuesday morning pastors’ text study. One of her favorite scripture verses, Isaiah 50:4, sums up her life among us in a nutshell: “The Lord God has given me the tongue of a teacher, that I may know how to sustain the weary with a word. Morning by morning he wakens my ear to listen as those who are taught.”

She was preceded in death by her parents and many cousins and close friends.

The family will receive relatives and friends at St. Louis the King Catholic Church in Harvey on Thursday, February 13, beginning at 10:00 am.

A Mass of Christian Burial will follow at 11:30 with Rev. Glenn Theoret, pastor, as celebrant. A reception will follow in Father Gauthier Hall.

Inurnment will take place at Holy Sepulchre Cemetery in Detroit where a memorial service will also be held at a later date.

The Canale-Tonella Funeral Home is assisting the Walling family where memories may be shared at canalefuneral,com.