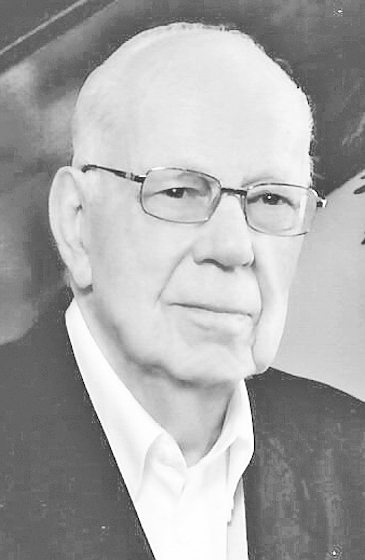 ISHPEMING, MI – Edwin B. “Ned” Johnson, age 95, longtime Ishpeming resident passed away on Sunday, October 6, 2019 at the Eastwood Nursing Center in Negaunee where he had briefly resided.

Ned as he was known, was born in Ishpeming, MI on October 21, 1923, son of the late Blanche (Carlson) and Edwin A. Johnson. He grew up in Ishpeming and was a graduate of the Ishpeming High School. Ned attended Michigan Technological University and graduated with a bachelor’s degree in metallurgical and materials engineering following his service in the U.S. Army during World War II. While he was in the Army, Ned was captured by the German Army and spent 7 months as a POW in Germany and later received the Purple Heart Medal with Cluster.

Ned’s entire career was with the Cleveland Cliffs Iron Company. Locally, he started at the CCI Research Lab in Ishpeming and moved on to become Manager of Michigan Mines. Ned then became President of Cleveland Cliffs which took him to Cleveland until his retirement in 1986 when he moved back to Ishpeming.

Ned was a man of faith and Christian values, having been a member of the Presbyterian Church in Ormond Beach, FL and attended the United Presbyterian Church in Ishpeming. He often said, “Always be humble and kind” or “It doesn’t cost anything to be kind to people.” He was an active community member having served on the Ishpeming School Board, and was a current member of the Vasa Lodge, Ishpeming Elks Lodge and the Kiwanis Club. Ned wintered in Ormond Beach, FL for many years where he was a member of the Halifax River Yacht Club and Oceanside Golf Club. Ned was a distinguished alumnus of MTU, having received honors and awards including 1999 Honorary Inductee of the Academy of Distinguished Mining Engineers, 1996 inducted into the Academy of Metallurgical and Materials Engineers, served as Trustee of the Michigan Tech Fund 1981-1991, serving as President from 1988-1990, along with being a member of the President’s, Hotchkiss and McNair Societies to name a few. Ned was also honored with an honorary doctorate degree from NMU. Ned always had a positive attitude towards life and will be fondly remembered for his generosity, sense of humor and love for the Upper Peninsula of Michigan.

Family was at the forefront of everything in Ned’s life and he is survived by a son, Scott (Janis) Johnson of Pagosa Springs, CO; two daughters, Vicki (Ron) Caneff of Hastings, MN and Marsha (Steve) Nardi of Ishpeming; his companion of many years Dottie Brown; 4 grandchildren, Theresa (Brian) Anderson, Stephanie Pham, Tracy Caneff, Chelsea (Erick) Roberts; granddaughter-in-law Margie Caneff, 10 great grandchildren and several nieces and nephews. He was preceded in death by his wife Lois M. Johnson, a grandson Marty J. Caneff, brother Bill Johnson and sisters, Jean Baxter and Marie Rahm.

The family will greet relatives and friends from 11:00am – 1:00pm on Friday, October 11, 2019 at the Bjork & Zhulkie Funeral Home. Funeral Services will follow at 1:00PM on Friday with Rev. Jennifer Santer to officiate. Military Honors will be accorded by the United States Army, UP Honors Team. Private interment will take place at the Ishpeming Cemetery. All are invited to join the family at River Rock Banquet Center, 1011 North Road, Ishpeming for a reception following the services.

In lieu of flowers, memorial contributions may be made to – The Michigan Tech Fund, Edwin B. & Lois M. Johnson Endowed Scholarship, 1400 Townsend Dr., Houghton, MI 49931 or a charity of one’s choice.

Ned’s obituary may also be viewed at bjorkandzhulkie.com where relatives and friends may leave a note of remembrance.